Big Tech is “scary” because it wants to be the solution to everything, New York City Mayor Bill de Blasio says 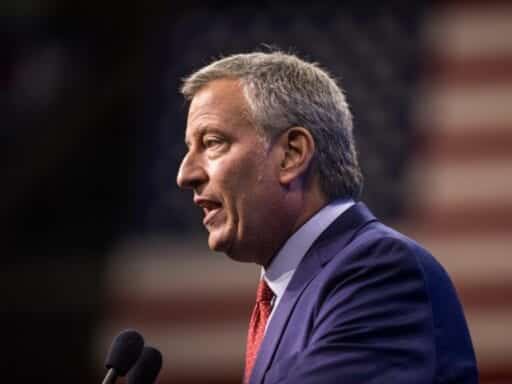 Share
Loading...
New York City Mayor Bill de Blasio speaks at the New Hampshire Democratic Party Convention on September 7, 2019 in Manchester, New Hampshire. De Blasio is one of 20 Democrats currently running for president but did not qualify for the most recent DNC debates. | Scott Eisen/Getty Images

On the latest Recode Decode, de Blasio called for antitrust investigations into Facebook and Google, and dismissed universal basic income as a cure-all in the face of job automation.

Tens of millions of American jobs could be eliminated by automation in the near future, and New York City mayor Bill de Blasio says it’s foolish to let the source of that disruption — the technology companies pushing advanced robots and artificial intelligence — also position themselves as the solution.

“I’ve talked to lots of technologists and … for some, technology becomes a quasi-religion and sort of the answer to all problems,” he said on the latest episode of Recode Decode with Kara Swisher. “But then when you say, what about the workers? What about the people? A silence descends in the room and what many of them cling to is UBI as their get out of jail free card.”

UBI refers to “universal basic income,” a proposed policy wherein the US government would send no-strings-attached money to all American adults, in the hopes that it will relieve their financial pressures and make working in the gig economy a livable career path. Silicon Valley entrepreneur Andrew Yang (who, like de Blasio, is running to be the Democratic nominee for president in 2020) has popularized UBI throughout the campaign, suggesting that every American receive $1000 from the government every month.

De Blasio praised Yang’s recognition that job automation poses a serious threat to workers in several industries, but said that $1000 “couldn’t even come close to being enough.”

“UBI could be part of a[n] answer to the challenge of automation and potentially tens of millions of people that work,” de Blasio added. “It is a false idol if you say, Oh, this will solve the problem … That’s ridiculous. That’s dangerous.”

On the new podcast, de Blasio also endorsed a tougher antitrust stance against tech giants such as Google and Facebook, comparing them to the oil and railroad companies that America’s monopoly laws were originally designed to combat — all three industries provide valuable services to customers, but their susceptibility to greed and exploitation means they need “ground rules.”

“We have societally always recognized, when we’ve gone into a new reality, that we better put some rules on,” he said. “The problem here has been this strange overindulgence in the notion of, ‘Well, technology is simply good and the intentions are pure and it’s liberating us.’”

“There’s a form of propaganda here,” de Blasio added. “It’s like everything else human: There’s good things in it, there’s dangers in it. I don’t trust any company. They’re still multinational corporations … The government is imperfect, but at least it comes with a democratic mandate and some checks and balances and some transparency. We better get the hell in this.”

Visit Vox.com/2020policy to learn more about where all the Democratic candidates stand on the issues.

The coronavirus has now killed more Americans than the 9/11 terror attacks
Coronavirus will also cause a loneliness epidemic
The American unemployment system is broken by design
The FDA approves a coronavirus test that can give results in 5 minutes
Republican Strategist Karl Rove says Bernie Sanders could beat Trump in 2020
The White House, definitely not scared of socialism, issues report on why socialism is bad