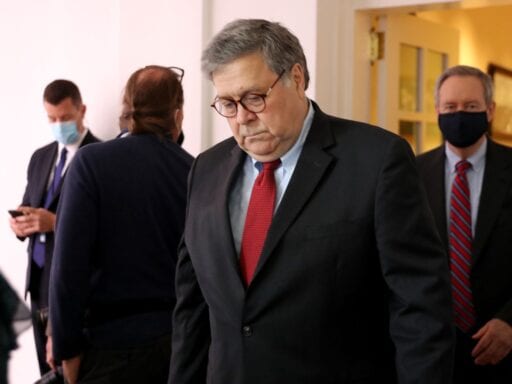 Share
Loading...
Attorney General William Barr has been criticized for acting as President Trump’s personal attorney and pushing the idea that tech companies have an anti-conservative bias. | Chip Somodevilla/Getty Images

The Massachusetts senator wants the attorney general to resign. She also wants him to sue Google.

You have to do something extraordinary to unite Elizabeth Warren and Bill Barr.

But that’s what Google has done. President Trump’s attorney general and personal fixer has filed an antitrust suit against the trillion-dollar internet titan. And the Massachusetts senator, who despises everything about the Trump administration and has called on Barr to resign, is cheering him on. Sort of.

“Two things can be true at the same time: Bill Barr is a corrupt Trump crony who should not be the Attorney General and the Justice Department has the power to pursue a legitimate, long-time coming suit against Google for engaging in anti-competitive, manipulative, and often illegal conduct,” Warren said in a statement to Recode.

This would be a striking alliance in any time. It’s even more so now that we’re days before an election, when you’d think that a Democrat would go out of their way not to support what the Trump administration wants.

But Warren and many others on the left have decided that going after Google, in what may be the most important tech lawsuit since the US government sued Microsoft nearly two decades ago, is worth making common cause with a bitter enemy.

Tuesday’s lawsuit is the most consequential result of the so-called “techlash” that has been brewing over the past few years — a feeling, often hard to quantify, that the big tech companies have grown without any kind of checks or balances from the government, and need to be reined in … somehow.

News organizations now scrutinize Google and other big companies with newfound zeal, and Congress has hauled in tech executives for public hearings. But that hasn’t slowed these companies’ velocity or reduced their power. Even punitive acts like a $5 billion fine levied against Facebook for privacy violations barely qualify as a wrist slap.

And while a landmark congressional report laid out an argument for restraining Google, Facebook, and their peers this month, there’s no guarantee that lawmakers will end up acting on any of that.

Barr’s suit, though, has the potential to fundamentally change the way Google works: A victory for the DOJ — or a settlement in advance of a verdict — could require Google to divest itself of crucial properties.

Just as crucially, the fact that Google is likely to spend years fighting the federal government in court could slow down the company, forcing it to pass on moves it wants to make, or simply by distracting it from its core business. Which is what some Microsoft executives say happened at that company when it fought a Clinton-era antitrust suit.

“In the case of Microsoft, some say that the trial was the remedy — it created a culture within Microsoft that paralyzed the company from bulldozing into adjacent markets,” says Luther Lowe, who heads public policy at Yelp, the restaurant review company that has complained bitterly about Google for years. “I hope that US versus Google will do the same.”

Make no mistake: Many of Google’s most vocal opponents wish Bill Barr weren’t the one making the case against the company. Barr is overseeing the Google case directly, after his top antitrust lawyer recused himself because of a conflict of interest. It’s possible that his presence in the case could work in Google’s favor.

Not only is Barr routinely accused of turning the DOJ into Trump’s personal law service, but Trump — and Barr — have made it clear that punishing technology companies is a political act, meant to win points with Trump’s base.

Trump routinely goes after tech companies in tweets, of course. But more than that, in recent months he’s turned that into action, by attempting to ban both TikTok and WeChat, citing national security concerns. And his White House has reportedly told its Republican allies that Trump would like them to “ratchet up scrutiny of social media companies it sees as biased against conservatives,” in the runup to next month’s presidential election; and they have obliged. Last week’s flurry of press releases slamming and threatening Facebook and Twitter after those companies’ restrained distribution of a dubious New York Post story aimed at Joe Biden underscores the point.

Barr, meanwhile, has a very long list of critics — not just ideological opponents like Warren, but also former DOJ officials, a whistleblower who accused Barr of chasing after marijuana companies out of personal animus, and a current federal prosecutor who says Barr has “has brought shame on the department he purports to lead.”

And when it comes to the Google suit, there are specific concerns. In September, the New York Times reported that some DOJ officials worried that Barr was rushing to bring a suit before the election, “overrul[ing] career lawyers who said they needed more time to build a strong case against one of the world’s wealthiest, most formidable technology companies.”

The most damning argument against Barr comes from Barr himself, via a jaw-dropping Fox News interview in June where he claimed there is anti-conservative bias in the tech industry and said one way to fix that would be “through the antitrust laws and challenging companies that engage in monopolistic practices.”

To hammer that home: There’s no substance to conservative complaints of systemic bias among technology companies. But even if there were, no one would argue in court that you would use antitrust laws, which are supposed to protect consumers from economic harm, to fix that.

So why doesn’t this alarm Warren, or anyone else who wants to see Google brought up on charges?

There are a few schools of thought:

But the main argument you hear from people who hate Barr but support his pursuit of Google is that someone needs to do it. And if it has to be Barr, then fine.

“I would much rather Bill Barr not be involved, because it gives Google ammunition to argue that it’s politically motivated,” says Sally Hubbard, director of enforcement strategy at Open Markets, an antitrust nonprofit. “But I’m not thinking about it as Bill Barr’s case.”

Open Markets was one of several-left leaning groups that signed an open letter in September urging the DOJ and state attorneys general to move forward with the case: “… the time for this enforcement action to proceed is now. In fact, it was long before now. As days, weeks, months, and years, continue to pass, more and more companies go out of business as Google’s dominance becomes more and more deeply entrenched.”

As Hubbard, Warren, and other Google opponents point out, some of them have been waiting for the federal government to move against Google for years. As the Wall Street Journal has reported, some officials in Barack Obama’s Federal Trade Commission recommended an antitrust lawsuit against the search giant in 2012. Instead, the FTC concluded that Google hadn’t violated antitrust laws, and gave Google what amounted to the most delicate of slaps on the wrist.

And while there is a lot of conversation in Washington about reforming and regulating Google and other big tech companies, none of that is likely to happen anytime soon, and may never happen at all.

That’s because overhauling antitrust laws — or the laws around Section 230, which gives tech platforms a sort of immunity from prosecution over content they host — would require lawmakers to … work together to change the laws. That’s a nonstarter in today’s Congress, where Republicans and Democrats aren’t even close to being on the same page.

And even in a theoretical Democratic Congress, which we might see after the November elections, lawmakers would have to make tech legislation a priority — and they are going to have a long list of priorities competing for their time.

But while an antitrust suit could take years to play out, it could actually affect the way Google does business — both in the future and in the present tense, as it spends time and attention fighting the government in federal court. Which is enough for Elizabeth Warren, and everyone else who hates Bill Barr, to root for him, for now.