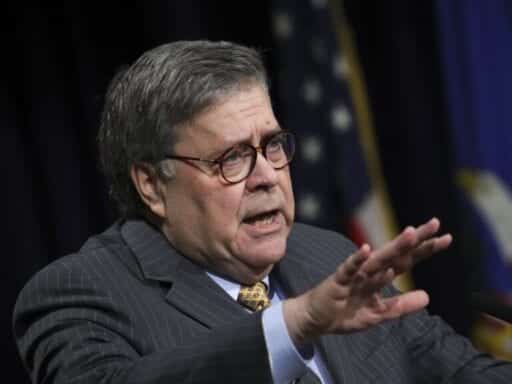 The inspector general failed to find wrongdoing in the FBI’s opening of the Russia investigation. Barr didn’t like that.

Justice Department Inspector General Michael Horowitz has completed his lengthy review of the FBI’s counterintelligence investigation into links between the Trump campaign and Russia — and his report, released Monday, fails to back up President Donald Trump’s conspiracy theories about a “deep state” plot against him.

In the report, Horowitz wrote that the decision to open the investigation “complied with [Justice] Department and FBI policies.” And, he said, he did not conclude that top officials were driven by “political bias or improper motivation” in doing so.

But in Attorney General Bill Barr’s Justice Department, a finding like that can’t be allowed to stand unanswered.

In the span of just a few hours, Barr released two statements under his own name that disagreed with some of Horowitz’s interpretations. Barr insisted that the FBI’s suspicions of wrongdoing within the Trump campaign were “insufficient to justify the steps taken,” and ominously questioned the FBI’s handling of the information used to open the investigation.

And John Durham, the prosecutor Barr picked to launch yet another inquiry into the origins of the Russia investigation, unexpectedly released a statement himself, saying he did not “agree with some of the report’s conclusions.”

Altogether, it made for some highly unusual pushback against the Justice Department’s internal watchdog, raising further questions about the mysterious Durham investigation, as well as concerns over the department’s politicization under Barr.

Horowitz’s report was, in fact, quite harsh in assessing the FBI’s handling of warrant applications to surveil former Trump campaign aide Carter Page, saying those applications contained many errors and omissions.

But as for the origins of the broader investigation, the inspector general found nothing to corroborate conspiracy theories that the bureau had it in for Trump. This conclusion was a problem for the president, who has been insisting for years that the opposite is true. And helpfully enough, Barr and Durham stepped in to insist that Horowitz’s findings will not be the last word on the matter.

What Horowitz concluded about the opening of the investigation

Why did the FBI start investigating the Trump campaign’s links to Russia in 2016?

The explanation that’s been put forward for two years now has been that, basically, it’s all the fault of Trump campaign foreign policy adviser George Papadopoulos. And Horowitz makes clear in his report that he agrees. Here’s the chain of events:

Horowitz’s report does not confirm any of these theories and outright debunks some. He concludes, for instance, that the Steele dossier reports “played no role” in the investigation’s opening. And, the IG writes, he found no information “indicating that any information other than” the tip from the foreign official “was relied upon to predicate the opening” of the investigation.

Now, even though Horowitz has been investigating all this for some time, there was one major early indication that Barr wouldn’t be satisfied with his conclusions — namely, that Barr appointed another prosecutor to launch a separate review of all this.

That prosecutor is John Durham, the US Attorney for Connecticut, who Barr assigned to examine the origins of the Russia investigation in May.

Initially, Durham was simply engaged in a “review” that would go beyond just the FBI, to more broadly examine the US government’s intelligence collection regarding Russia and the Trump campaign. Horowitz, as the Justice Department’s inspector general, has no authority to investigate other US intelligence agencies.

Curiously, Barr has been very personally involved in this Durham review — including making at least two trips to Italy and one to the United Kingdom. And, by late October, anonymously-sourced reports claimed Durham’s probe was now a criminal investigation. Conservative media began hyping what Durham would find, and Trump himself said he was greatly looking forward to “the Bull Durham report.”

Amidst all that, there’s been no real concrete information about what, if anything, Durham has found.

But, in the weeks before Horowitz released his report, anonymously-sourced reports started to spill out describing tensions at the Justice Department.

On December 2, the New York Times reported Barr had told other Justice Department officials that he was skeptical of Horowitz’s conclusion that the FBI had enough information to open the investigation — and one source said that Durham had “unearthed some evidence that supports Mr. Barr’s uncertainty.”

Then, on December 4, the Washington Post reported that Horowitz had asked Durham whether he could corroborate one conspiracy theory — that Mifsud was actually a US intelligence asset setting up Papadopoulos. Yet Durham told Horowitz “that his investigation had not produced any evidence that might contradict the inspector general’s findings on that point.” That seemed to herald less of an outright split between Durham and Horowitz — at least until Durham issued his response to Horowitz’s findings.

Once Horowitz’s report was released on Monday, Barr and Durham made the striking decision to release public statements taking issue with his findings — two statements, in Barr’s case.

Barr’s initial statement was mainly designed to make clear that he does not agree that the opening of the FBI investigation was properly handled. Barr proclaimed that “the FBI launched an intrusive investigation of a U.S. presidential campaign on the thinnest of suspicions that, in my view, were insufficient to justify the steps taken.” He also added that, “from its inception, the evidence produced by the investigation was consistently exculpatory.” (This statement, of course, ignores all of the crimes — which have led to prison time for several involved.)

Taken in isolation, the statement seemed par for the course for this unusually political attorney general, who famously pre-spun the Mueller investigation’s findings to Trump’s benefit.

Then, however, Durham spoke up too:

The key line here is that Durham does “not agree with some of the report’s conclusions as to predication and how the FBI case was opened.” By “predication,” he seems to mean whether the justification for opening the investigation was proper.

But what’s odd about this is that even though Durham admits his “investigation is ongoing” — and is a criminal probe, in which no charges have been filed — he is vaguely speaking out about his judgments anyway. That’s unusual behavior by a prosecutor, and the timing certainly seems political.

And after that, Barr released another statement:

In some ways this is the most intriguing of the three. Here, Barr emphasizes that he is not criticizing the foreign official who brought forward the tip about Papadopoulos. Instead, he flags concern about “what was subsequently done with that information by the FBI.”

So what is going on here? There seems to be two possibilities.

One is that Durham really has found something. This may seem unlikely given how thoroughly the Russia investigators have already been investigated, but it’s not impossible that there was some genuine misconduct that Horowitz missed. Still, if that is true, we still have no actual information on what it might be, and it’s odd that Durham is speaking about it before his investigation is complete.

The second, and more alarming possibility, is that this is a hit job — that Durham is doing Barr’s bidding, trying to protect Trump politically and to damage Trump’s political opponents. That has seemed unlikely to many, since Durham had a very good reputation among those who’ve worked with him in the past. But his statement Monday certainly raises questions about his motivations here.

You don’t have to love Star Wars to dig The Mandalorian
Democrats need a positive agenda on immigration now that Trump’s killed grand bargains
Kanye West’s turn toward spirituality, explained
“A major outbreak and a major collapse”: South America’s worrying coronavirus future
Collisions reveal a Navy tragically undone by its can-do spirit
Democrats are trying to use Kavanaugh’s 2006 confirmation hearing testimony against him