Bill Cosby is in prison. But the first real #MeToo trial hasn’t happened yet. 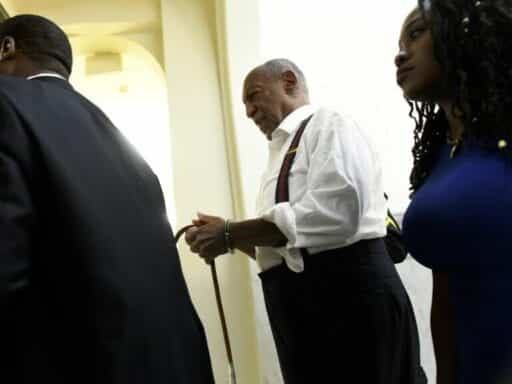 The true test of the movement’s impact on the criminal justice system has yet to come.

When Bill Cosby was sentenced last week to three to 10 years in prison, some observers saw it as a #MeToo milestone.

Jenny Jarvie of the Los Angeles Times called Cosby “the first celebrity of the #MeToo era to be locked up.” Kevin Fallon, a reporter for the Daily Beast, tweeted that Cosby was “the first man to be prosecuted and sentenced during the #MeToo movement.”

While some lesser-known figures have faced criminal charges, Cosby is one of the first high-profile men to face criminal consequences for sexual misconduct since the #MeToo movement began to gain widespread attention last year. Another was Larry Nassar, the former USA Gymnastics doctor who was sentenced to more than 100 years in prison in January for abusing young gymnasts.

These two cases, the most public examples of men actually facing criminal penalties for sexual assault in the #MeToo era, have something in common: The crimes were committed, and many of the allegations came to light, before the current iteration of the #MeToo movement began. We have yet to see the first highly visible people both accused and convicted in the #MeToo era. The true test of the movement’s impact on the criminal justice system, therefore, is yet to come.

The allegations against Cosby and Nassar had been public before #MeToo

The public outcry against Cosby preceded #MeToo by several years. Andrea Constand first reported to police that Cosby had assaulted her in 2005. Comedian Hannibal Buress called out Cosby in a routine in 2014 that went viral, revisiting old public allegations against Cosby. It prompted more women to come forward to report misconduct by Cosby. That year, TV networks began pulling projects associated with Cosby, and in 2015, 35 women with allegations against him appeared on the cover of New York magazine.

Meanwhile, women were reporting sexual abuse by Larry Nassar to Michigan State University, where he was a sports medicine physician, as early as the 1990s. USA Gymnastics first heard of the allegations in June 2015. The first allegations became public the following year, when Rachael Denhollander told the Indianapolis Star that Nassar had sexually abused her in 2000, when she was 15. She also filed a criminal complaint with the police at Michigan State University. In December 2016, Nassar was also charged with possession of child pornography.

In both cases, the #MeToo movement may have influenced the outcome. The heightened public conversation around sexual assault may have led the Cosby jurors to reject the victim-blaming arguments put forth by the defense. In Nassar’s case, additional survivors came forward after the #MeToo movement began, some of them, like Olympic medalist Simone Biles, invoking the movement explicitly. In total, more than 300 people have said Nassar abused them.

Nassar’s trial probably received more public attention than it would have if it had not taken place in the midst of #MeToo. His sentencing hearing, in which more than 100 women spoke up about the abuse they had suffered at his hands, became an iconic moment of the new #MeToo era.

“My dream,” said Olympic medalist Aly Raisman at the hearing, “is that one day everyone will know what the words ‘me, too’ signify, but they will be educated and able to protect themselves from predators like Larry so that they will never, ever, ever have to say the words, ‘me, too.’”

Still, in important ways, both Nassar’s and Cosby’s cases predated #MeToo. It’s not surprising that the first high-profile sentencings of the #MeToo era have their roots in an earlier time. The criminal justice system moves slowly and has never been particularly good at prosecuting sexual assault cases, especially those involving wealthy, high-profile defendants.

When model Ambra Battilana Gutierrez reported in 2015 that producer Harvey Weinstein had grabbed her breasts and tried to reach up her skirt during a meeting, Manhattan District Attorney Cyrus Vance declined to prosecute the case. A few months later, Weinstein’s lawyer David Boies donated $10,000 to Vance’s reelection campaign.

In March 2018, when the #MeToo movement was in full swing, New York Gov. Andrew Cuomo called for an investigation into the handling of the Weinstein case. But in the summer, according to Capital & Main, Cuomo suspended the investigation — around the same time that Boies’s firm donated $25,000 to his campaign. The governor’s office has said the suspension had nothing to do with the donation and was an effort to keep from interfering with the current criminal case against Weinstein. But as Albert Samaha of BuzzFeed pointed out, that case could go on for years — and so could the suspension.

Powerful men have long been able to evade consequences when it comes to illicit sex and sexual misconduct. That might be changing thanks to #MeToo, but at least when it comes to criminal prosecution, it’s changing slowly. We have yet to see the first high-profile #MeToo trial — the first powerful person accused, tried, and convicted during the movement.

Such a trial might be coming. Weinstein was indicted in May on rape charges and in July on three additional sexual misconduct charges, two of which carry a life sentence. He has pleaded not guilty, and a trial date has not yet been set.

Women’s accounts of sexual harassment and assault by Weinstein kicked off the current phase of the #MeToo movement, and he has become symbolic of everything that movement seeks to combat: not just sexual misconduct but abuse of power and the use of wealth and connections to avoid any repercussions. The movement has unquestionably changed the public conversation around sexual harassment and assault. When and if his case goes to trial, we’ll find out how much the criminal justice system has changed.

The “two dose” problem for Covid-19 vaccines, briefly explained
Republicans don’t care what you think
Vox Sentences: Right to discriminate?
Captain Marvel’s 2 end-credits scenes, explained
High-stakes brinksmanship in the Pacific as China expands reach into the South China Sea
Who will win the second big day of Democratic primary contests, according to the polls