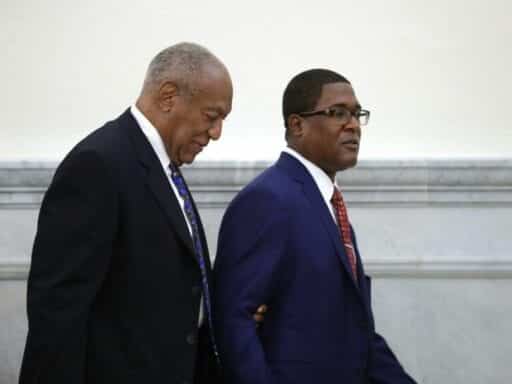 Spokesperson Andrew Wyatt also claimed Cosby was subjected to “the most racist and sexist trial in the history of the United States.”

Shortly after Bill Cosby was sentenced to three to 10 years in state prison for sexual assault and taken away in handcuffs, his spokesperson Andrew Wyatt told reporters that Cosby — along with embattled Supreme Court nominee Brett Kavanaugh — was the victim of a “sex war.”

“What is going on in Washington today with Judge Kavanaugh is part of that sex war that Judge [Steven] O’Neill and his wife are a part of,” Wyatt said, referring to the judge who oversaw Cosby’s trial.

Wyatt also called Cosby’s trial that resulted in a conviction “the most racist and sexist trial in the history of the United States,” saying that Cosby was “one of the greatest civil rights leaders” and a “great educator of men and boys.” He also criticized the psychologists who testified against Cosby, and claimed that audio footage of Cosby played in the courtroom was falsified.

In a particularly bizarre moment, Wyatt referenced the persecution of Jesus while talking about Cosby. “They persecuted Jesus and look what happened,” he said, according to CNN. “Not saying Mr. Cosby’s Jesus, but we know what this country has done to black men for centuries.”

Bill Cosby’s publicist, Andrew Wyatt, claims both Cosby and Brett Kavanaugh are victims of “a sex war” that is “going on in Washington today.” pic.twitter.com/jRHOjzUZD7

Wyatt has repeatedly argued that racism played a role in Cosby’s conviction in not-so-subtle terms, calling the April trial a “public lynching.” Other members of Cosby’s team have invoked Emmett Till, a black boy murdered after a white woman falsely accused him of whistling at her.

But it was the first time that Cosby’s team has made a connection to Supreme Court nominee Brett Kavanaugh. Kavanaugh’s nomination has been embroiled in controversy after two women accused him of sexual assault and misconduct in incidents dating back to the 1980s. Christine Blasey Ford came forward earlier this month to accuse him of attempted rape during a high school party in the ’80s. She is set to testify before the Senate Judiciary Committee on Thursday.

On Sunday, a second accuser, Deborah Ramirez, stepped forward with her own story of sexual misconduct on Sunday, saying that Kavanaugh had exposed himself to her at a college party. Both accusers have called for the FBI to investigate their claims before a vote on Kavanaugh takes place, but contrary to Wyatt’s claims, there’s a strong chance Kavanaugh could be confirmed anyway.

Trump’s association health plans are kind of a flop
Former Times book critic Michiko Kakutani recommends books for the Trump era
Is Russia first to a Covid-19 vaccine? Not so fast.
Larry Page, Alphabet’s absentee CEO, is stepping down after a challenging year for Big Tech
Figuring out ways to read books right now is tough. We’re here to help.
Denaturalization, explained: how Trump can strip immigrants of their citizenship