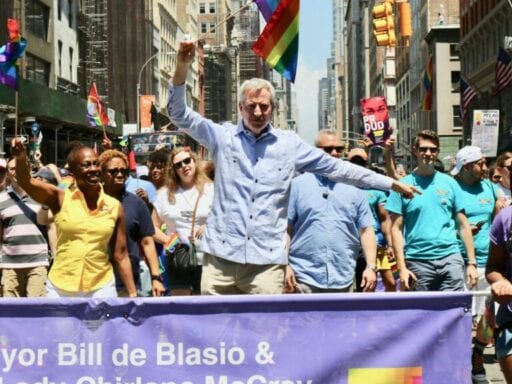 The New York City mayor is done running for the White House.

Bill de Blasio has thrown in the towel on his 2020 presidential bid that didn’t make a ton of sense in the first place.

The New York City mayor on Friday announced that he is calling it quits on his White House run, which he first announced in May. De Blasio will be turning his full attention back to the city he’s at the helm of.

“Getting out there, being able to hear people’s concerns, address them with new ideas, has been an extraordinary experience. But I have to tell you, at the same time, I feel like I’ve contributed all I can to this primary election,” de Blasio said an an appearance in Morning Joe discussing the decision on Friday. In a separate piece for NBC News, de Blasio wrote that while his campaign is over, he plans to “keep fighting with for working people” and making sure New York City “remains the vanguard of progressivism.”

De Blasio’s decision to drop out is not a surprise — it’s largely been a question of when, not if, he would withdraw from the race. He never gained traction in the polls, and while he had a solid progressive track record to tout and he generally performed well in the debates in which he appeared, he was not a hit with voters.

De Blasio was widely criticized for running for president in the first place. He tossed his hat into the ring late in the game and when the field was already crowded, and a Quinnipiac University poll found that 76 percent of New York City voters didn’t think he should run. Politico in March quoted a former aide calling the idea of a 2020 de Blasio campaign “fucking insane.”

The mayor was well aware of the odds and in interviews openly admitted he was an “underdog” and in an uphill battle. “I was the underdog in everything I’ve been near, and I’m not saying that with any hubris,” he told the New York Daily News before announcing his run. “Any time I get in a race, I get in it to win.”

But win he did not, and so now de Blasio is out.

De Blasio has a solid progressive effort. His political problems are more … personality-based.

De Blasio during his campaign touted his progressive record and accomplishments in New York, including universal pre-K and expanded sick leave, reduced stop-and-frisk policing, and the city’s $15 minimum wage. He sought to compete in a lane already occupied by two big-name progressives — Sens. Bernie Sanders (I-VT) and Elizabeth Warren (D-MA) — both of whom are still in the race.

De Blasio, 58, is currently serving his second term as New York City mayor, and because of term limits, he won’t be able to run for a third term during the city’s next mayoral race in 2021. It’s not clear where the mayor, who has spent years climbing his way up the New York political totem pole, will head when his tenure ends.

Part of the issue with de Blasio is that, to put it frankly, he’s not a very popular guy. He’s got anemic approval ratings among New Yorkers (specifically, white New Yorkers, with people of color, he does much better), and his antagonistic relationship with the local press has spilled over onto the national stage. Among the Democratic primary field, candidates’ favorability has tended to track with their name recognition, meaning the more Democratic voters know them, the more they like them. Except for de Blasio. People know him and don’t like him.

While he was in the race, I dug in on the de Blasio hate (you can read the full explainer here):

De Blasio’s issue largely seems to be one of style. De Blasio can come off as sanctimonious, arrogant, stubborn, and preachy about the gravity and scope of what he’s doing. He can be perceived as caring more about big-picture symbolism than the day-to-day grind of city policy, and he’s not particularly charismatic. To make matters worse, he has a fractious relationship with the New York press — which tends to drip out into national media, since so many media companies are based in New York — and neither he nor they seem particularly inclined to try to fix it. And to some extent, New Yorkers are always going to hate the mayor they have, whoever it is.

And de Blasio’s presidential run made matters worse, not better, in terms of his public image. He was widely criticized for being on the campaign trail in Iowa during a major blackout in New York City in mid-July, even if there wasn’t much he could do about the situation, wherever he was.

Now, de Blasio is headed back to his day job full-time. New Yorkers are welcoming him back with … arms.

Philanthropy is undergoing a massive backlash. A new book argues it’s gone too far.
The EPA appears to be using coronavirus to make huge concessions to polluters
A “new” Amazon waffle maker came with an old crusty-looking waffle already in it
Poll: The majority of Americans now support impeachment
GLAAD: the number of LGBTQ series regulars on TV is at an all-time high
Congress is forcing cities to defund the police, firefighters, and schools