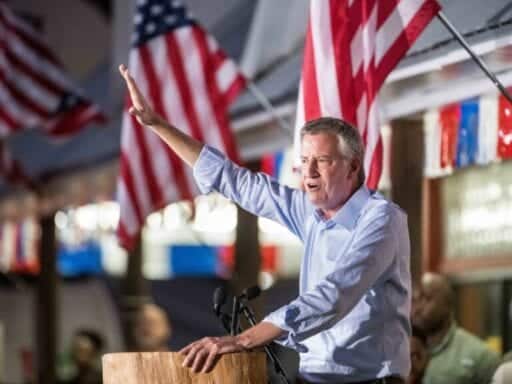 “These are not only good ideas, but in many cases, proven in the context of my city, and this is the underlying basis of my whole campaign.”

On Thursday, de Blasio rolled out a plan to reform democracy and improve the American voting system. The proposal, shared exclusively with Vox, appears to be a mix of items put forth in House Democrats’ sweeping anti-corruption bill and tested out in the city he leads. It serves a dual purpose: It lays out a progressive blueprint for improving American democracy, and it also gives de Blasio a chance to show off what he thinks is a strong part of his record in New York.

“These are not only good ideas, but in many cases, proven in the context of my city, and this is the underlying basis of my whole campaign,” de Blasio, who has struggled to crack 1 percent in national polling, told me in a phone interview.

One of the primary planks of “the de Blasio democracy platform,” as his campaign has dubbed it, is a proposal to introduce 8-1 matching on small-dollar contributions for candidates who accept public financing for their campaigns. So, if you donate $100 to a candidate, that translates to a total of $900 to a campaign. Right now, some public financing options exist at the federal level but they’re not commonly used by major candidates because of the limitations on them. De Blasio’s idea is to make the public financing route more appealing and reduce the influence of big-money donors in elections.

His proposal would limit maximum contributions to $1,000 for candidates who accept public financing for their campaigns, and then they would be entered into an 8-to-1 public matching system for small-dollar donations of up to $200. (Candidates who don’t opt in to the system have a $2,500 campaign contribution limit.)

The 8-1 ratio is the same one New York City voters approved in a ballot measure in 2018. (Previously, the ratio had been 6-to-1.) The rules are set to go into effect in 2022. It’s part of a long-standing effort in New York, since the 1988 establishment of the Campaign Finance Board, to try to limit the influence of money in politics in the city and reduce campaign corruption. The board put in place 1-1 matching 30 years ago and has gradually increased it since.

“It allows more people to participate, because their $5 or $10 or 20 bucks actually amplifies with public match, and it actually becomes a meaningful contribution,” said Jessica Wisneski, co-executive director of public advocacy group Citizen Action of New York. “And it gets candidates to actually seek those small donors … instead of having to dial for donors.”

An analysis of New York City’s public financing system in the Election Law Journal found that the city’s implementation of its 6-1 matching rate in 2009 spurred increases in both the number of individual contributions of $250 or less and the percentage of local candidates’ total campaign funds coming from small donors. “The New York City public financing system was successful in amplifying the voice of small donors,” said Corey Goldstone, the spokesman for watchdog group the Campaign Legal Center.

It’s the kind of proposal that’s already popular in other cities — San Francisco just increased its program, and it’s in place in Los Angeles, Baltimore, Denver, and Washington, DC — and is gaining traction more broadly. House Democrats proposed 6-1 matching in their legislation. In New York State, a commission is currently looking at implementing a 6-1 match statewide and is set to issue a report on the matter on December 1. De Blasio’s announcement could be seen as a nudge on that front — and toward New York Gov. Andrew Cuomo.

Even if de Blasio’s own presidential campaign isn’t necessarily succeeding at engaging a ton of voters, the suite of proposals — including one to create a federal chief democracy officer, whose job it would be to oversee national voting and promote participation — show that getting more Americans involved in the political process is one of his top concerns. Who knows, maybe he could be the next Jay Inslee on climate change except for anti-corruption.

What else is in the proposal

Beyond the New York-inspired elements, de Blasio has put forth multiple ideas to strengthen American democracy and the election system, many of which are in House Democrats’ blueprint as well. His proposals include:

“I think it’s something that people are looking for, they’re looking for some way to feel like democracy is functioning again, and these are some of the things I think could restore some faith,” de Blasio said of his package of proposals.

To be sure, there are some unanswered questions in de Blasio’s plan. It doesn’t address what to do about the Federal Election Commission, which is currently at a standstill, or specify whether the voting rights of formerly incarcerated people will require them to pay any related fees or fines to the courts related to their crimes. De Blasio’s campaign estimates that the initiative would cost $5 billion overall, and a spokeswoman for de Blasio said that is in the highest-case scenario, with every candidate, including Republicans, opting for public financing.

The mayor would pay for it with a surcharge on fines banks and corporations pay in civil settlements and criminal convictions. It mirrors the Freedom from Influence Fund at the Treasury Department that House Democrats have proposed under their legislation.

“It opens up a new vein of participation,” de Blasio said

Wisneski, who is currently advocating for public fund matching at the state level, was complimentary of de Blasio’s record on campaign finance. “De Blasio, to his credit, has been really strong on campaign finance all along,” she said. “He’s always been a staunch supporter — most New York City politicians are — because they’ve used the system successfully.”

Another New Yorker previously in the 2020 race — Sen. Kirsten Gillibrand, who ended her bid in August — put forth one of the most ambitious campaign finance plans of all of the Democratic primary candidates this election cycle. She proposed giving $200 to every American to then give to whatever presidential candidate they choose.

What’s up with Bill de Blasio?

De Blasio, who announced his White House bid in May, has struggled to get much traction in the polls. He’s got a strange relationship with many of his constituents, and many New Yorkers didn’t want him to run for office in the first place.

Still, the mayor has kept at it. He’s rolled out multiple policy proposals, including a plan to “tax the hell” out of rich people that basically looks like Elizabeth Warren’s tax plan on overdrive. “What I have found, and I’ve never run for president of the United States before … is that as you build up a campaign, actually getting the policy pieces right is serious business,” he told me.

He has increased his national media presence and campaigned in early voting states in the hope of registering more with voters.

But de Blasio didn’t make the September debate and it’s not looking great for the October debate, either, for which the cutoff to meet the Democratic National Committee’s polling and donations requirements is October 1. De Blasio has said that’s when he’ll think about dropping out, though he’s left the door open for sticking around a bit longer.

De Blasio noted that the debates haven’t made much of a dent in the polling, one way or another, this election cycle, meaning maybe they’re not the end-all, be-all for a campaign. (Kamala Harris’s polling bump after the first debate, for example, has largely dissipated.) But he also acknowledged not making the stage is less than ideal. “It’s the only comparison shopping moment, and it’s a definition of strength,” he said.

“October 1 is that crucial moment where I’m going to have to assess,” he said. “I said at the very beginning of the month, if I’m not in the October debates, it’s hard to conceive of a path forward, but I just want to make a decision based on the final facts as they are.”

This pregnant black mom was accused of hiding stolen goods under her shirt
Latest House immigration bill: here's what you need to know about what will be voted on Wednesd...
Supreme Court won't hear new case from North Carolina on partisan election maps
Household income surged in April despite the collapsing labor market
The coronavirus likely came from China’s wet markets. They’re reopening anyway.
The gun solution we’re not talking about