Bill Gates on Elizabeth Warren, Jeffrey Epstein, and why he’d pay more — but not too much more — in taxes 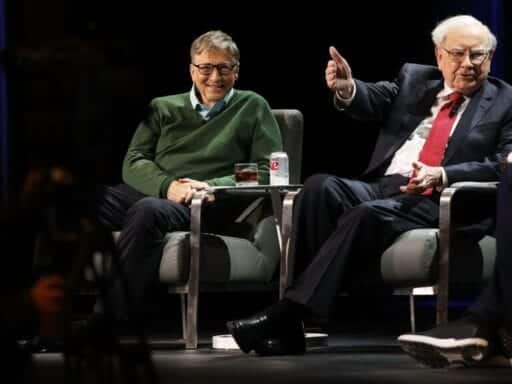 Gates tried to split the difference in the conversation around Big Philanthropy and Big Government.

Bill Gates epitomizes the elite in 2019.

Gates sits at the center of the conversation about Big Tech, Big Money, and Big Philanthropy — all of which are increasingly unpopular with Americans who worry about the personal wealth that a small group of tech company leaders has amassed. But on Wednesday during an appearance at the New York Times’ Dealbook conference, the world’s second-richest person tried to offer a defense of billionaires in an age of massive income inequality.

Gates had to tangle with thorny questions about his connections to Jeffrey Epstein, whether the Gates Foundation should be as powerful as it is, and how he reckons with a possible Elizabeth Warren presidency.

Here are some of the most interesting things Gates discussed:

Bill Gates is open to paying more in taxes, but not too much more

Gates is different from other billionaires. But not too different. His net worth exceeds $100 billion and he has consistently indicated that he’s more open to paying higher taxes than many of his fellow billionaires seem to be. He has said he supports reinstating the higher rate for the estate tax, which is assessed when a millionaire dies and seeks to pass along money to their heirs, as well as an increase in the capital gains tax, or the rate at which money made through investments is taxed.

But Gates is concerned about proposals like Elizabeth Warren’s landmark wealth tax plan, which would assess a 3 percent tax on every dollar over $1 billion in net worth. He says that American innovation could be at “risk” if taxes get too high.

“I’ve paid over $10 billion in taxes. I’ve paid more than anyone in taxes. If I had to have paid $20 billion, it’s fine. But when you say I should pay $100 billion, then I’m starting to do a little math about what I have left over,” Gates said, eventually adding that he was “just kidding.”

“I’d love for somebody to find a middle-ground approach,” Gates said.

Warren could very well be the Democratic nominee, and Gates seemed to be wrestling with what he would do if that ended up the case. Gates has not hidden his distaste for Trump, but he also evinced some dislike for Warren on Wednesday, as well.

“I’m not sure how open-minded she is,” Gates said when asked if he would meet with Warren, “or that she’d even be willing to sit down with somebody who has large amounts of money.”

Asked who he’d back in a hypothetical election between Warren and Donald Trump, Gates suggested but did not say outright that it would be Warren, saying that he’d cast a ballot for whichever displayed the “more professional approach” to the presidency, even if he disagrees with them.

”I hope the more professional candidate is an electable candidate.”

Bill Gates says that political giving — not philanthropy — is the problem

Some critics think billionaires should not be allowed to put their money into foundations and receive tax deductions for this philanthropic giving — arguing that it deprives the US government of revenue for social services. Gates said that some gifts to foundations could be “more taxed.”

But Gates, whose foundation gives out about $5 billion a year, defended Big Philanthropy against its critics who argue that it is a second-class way to solve the country’s problems, after government.

“Should rich people pay more in taxes? The answer is yes. For whatever remainder of money that they have left over, I do think philanthropy is a good thing. That 2 percent of the economy plays a role that neither the private sector or the government is able to do,” Gates said. “If you create a company that is super valuable, at least some part of that you should be able to have — a little bit for consumption, and hopefully the balance to do philanthropic things.”

Gates said the behavior he would try to avoid would be massive political gifts. In his view, those are undemocratic.

“I choose not to participate in large political donations. There are times it might feel tempting to do so,” Gates said. “But I just don’t want to grab that gigantic megaphone.”

Gates offered another full apology for his meetings with Jeffrey Epstein after Epstein’s conviction on charges of child abuse, which were exposed in reporting by the New York Times.

Gates said he acknowledged that his time with Epstein helped legitimize him by welcoming him back into high society’s mainstream. He said he was motivated by a desire to save human lives with more resources.

“I made a mistake in judgment that I thought that those discussions would lead, literally, to billions of dollars going to global health. It turned out that was a bad judgment. That was a mirage,” Gates said. ”And I gave him some benefit by the association. So I made a doubly wrong mistake there.”

Bill Gates worries about legitimizing other corrupt billionaires in the future

Unfortunately, Gates worries that an Epstein-like situation could happen again and that he could “credentialize” other billionaires through the Giving Pledge, which is Gates’s and Warren Buffett’s effort to convince the world’s billionaires to commit to giving half of their money away to charity.

Only 10 percent of the world’s billionaires have signed it, and the Pledge has particularly struggled to attract wealthy members from outside the US. Gates said it’s “tricky” to recruit billionaires in some countries because his staffers are ill-equipped to assess if their fortune was made through corrupt means.

“I feel bad. We probably will at some point accept someone into the Giving Pledge and it will turn out that their fortune is a disreputable fortune,” Gates said. “If you really want to get out there and get more people drawn into philanthropy, there is a risk that you’ll make a mistake.”

Why Elizabeth Warren is losing even if all your friends love her
Rep. Adam Kinzinger’s new PAC hopes to pull the GOP away from Trump
Neil Simon was one of America’s greatest playwrights. These 4 works show why.
An FBI investigation shows Ohio’s abysmal energy law was fueled by corruption
Chad Wolf just resigned as acting homeland security secretary
Report: Pruitt asked staffers to use personal credit cards for his hotel bookings