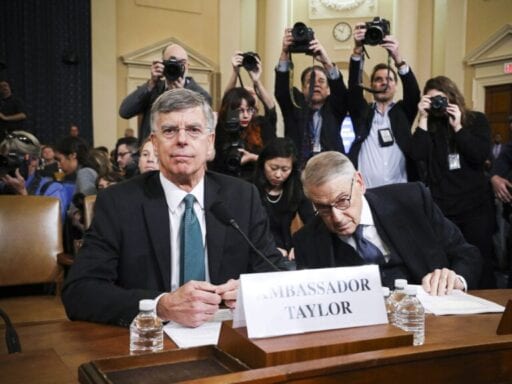 He said a member of his staff gave an account of a previously unknown Trump phone call.

Toward the end of his opening statement in the first public impeachment hearing Wednesday, diplomat Bill Taylor dropped a bombshell.

Last week, Taylor testified, a member of his staff told him of a previously unknown phone call involving President Donald Trump — one that points to further personal involvement by the president in pressuring Ukraine to investigate the Bidens.

This call took place on July 26, the day after Trump’s now-infamous phone call with Ukrainian President Volodymyr Zelensky. Taylor’s staff member told him that Ambassador to the EU Gordon Sondland had called Trump on the phone from a restaurant; the staffer was present for that call. During the call, the staffer heard Trump asked Sondland about “the investigations,” and Sondland replied that the Ukrainians were ready to move forward.

It’s yet another damning revelation in the scandal, one that further debunks the president’s defenders’ argument that there was nothing to see here. And it’s momentous because it suggests that Trump was very personally involved in what Sondland was telling the Ukrainians.

NEW: Taylor discloses that his staff overheard phone call in which Trump asked Sondland about investigations into the Bidens in July

Taylor’s staff member says Sondland told them that “Trump cares more about the investigations into the Bidens” than anything else re: Ukraine pic.twitter.com/yEaEOzIAMn

There are many witnesses and documents attesting that, over a period of several months, Sondland repeatedly told the Ukrainians and his American colleagues that Ukraine needed to commit to investigations Trump wanted — first in exchange for a White House meeting, and later to get military aid Trump was holding up.

These witnesses said Sondland frequently claimed to be carrying out Trump’s wishes — but the extent to which he was simply interpreting his boss’s desires versus personally consulting with Trump hasn’t been clear.

This account, though, would suggest it was Trump all along — that the president was indeed instructing Sondland (a donor who had given $1 million to his inauguration committee) on what to tell the Ukrainians. Furthermore, Sondland was openly saying this was all about the Bidens, according to this staffer.

It also further calls into question Sondland’s own testimony — which he has already had to revise once. Sondland claimed he was completely unaware of the Bidens’ connection to Burisma until quite late, and he claimed not to be able to recall many conversations with Trump about it. According to this staff member’s account, neither is true.

Taylor said he was unaware of this information until the staff member came forward last week. Democrats are clearly eager for more information on this topic. Here is what Taylor said, exactly, about this in his opening statement:

Following the call with President Trump, the member of my staff asked Ambassador Sondland what President Trump thought about Ukraine. Ambassador Sondland responded that President Trump cares more about the investigations of Biden, which Giuliani was pressing for. At the time I gave my deposition on October 22, I was not aware of this information. I am including it here for completeness. As the Committee knows, I reported this information through counsel to the State Department’s Legal Adviser, as well as to counsel for both the Majority and the Minority on the Committee. It is my understanding that the Committee is following up on this matter.

Why the vintage terrors of The Inner Sanctum Mystery make for great modern Halloween fare
One Good Thing: The sweet, animated melancholy of Kiki’s Delivery Service
Vox Sentences: Impeachment, Day 24
Rapid $1 Covid-19 tests exist. Why can’t we get them?
Facebook is banning political ads ... after the election
Antitrust officials ordered Facebook, Amazon, and other tech giants to disclose 10 years of acquisit...