Billionaire Reid Hoffman, one of the most powerful Democratic donors, is raising money for Cory Booker 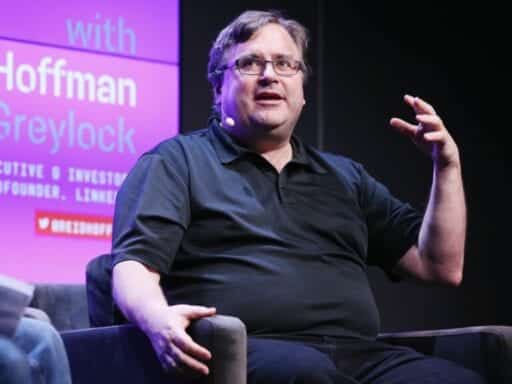 Hoffman represents a new type of Democratic donor — one that is willing to fight the party establishment and rebuild it in his image.

Reid Hoffman is hosting a high-dollar fundraising event for Sen. Cory Booker (D-NJ) later this month, a coup for Booker and a revealing move by Hoffman, who has so far kept his cards close to his chest in the 2020 race.

Hoffman, one of the most closely watched donors in Democratic politics, is asking Silicon Valley givers to come to a dinner on May 17 in Portola Valley, California, Recode has learned. The event will be held at the home of Eileen Donahoe, a former ambassador and top fundraiser during the Clinton and Obama campaigns, and her husband, John Donahoe, the former CEO of eBay.

While a person familiar with Hoffman’s thinking said it is not meant to be an endorsement — Hoffman is expected to also financially back candidates like former Vice President Joe Biden and Sen. Kamala Harris (D-CA) as well — this is Hoffman’s first event for a presidential candidate this cycle. Hoffman’s team recognizes it will inevitably be read as a strong signal of whom Hoffman favors among the Democratic candidates. It isn’t clear if he’ll do fundraising events for other candidates.

“I‘ve known Cory for a long time, and I believe he has the experience, bold solutions, and vision to win the nomination and the presidency,” Hoffman said in an email to donors seen by Recode. “It’s important that we elevate the best voices in the race. If you know Cory, you understand why I’m advocating for him. And if you haven’t had a chance to meet the Senator, you won’t be disappointed.”

Ordinarily, backing from someone like Hoffman would be an unqualified victory. But in the Democratic Party of 2020, that blessing could reinforce the perception that Booker is too close to Silicon Valley.

Hoffman has been one Booker’s closest allies in Silicon Valley for a long time, which is why it has surprised some political observers that Hoffman — the billionaire founder of LinkedIn — has not been more vocal in his backing of Booker, who has struggled to keep pace with the strongest Democratic fundraisers despite his extensive (and potentially politically damaging) ties to Silicon Valley mega-donors.

Hoffman and Booker representatives did not immediately respond to a request for comment.

Hoffman himself represents a new type of Democratic donor — one that is willing to fight the party establishment and rebuild it in his image. That has made him a figure of political fascination as one of the most powerful Democratic donors in the Trump era.

Hoffman doesn’t differ from Democratic orthodoxy on policy, but on tactics: The LinkedIn founder has tried to reshape the types of groups that billionaires support. Rather than funneling big checks into Super PACs or party committees, Hoffman since 2016 has tried to finance nonprofit groups and startups that are trying to improve voter turnout, for instance.

Or as one of his advisers put it to Recode in a profile of Hoffman in 2017: “How can we take scale-up expertise from Silicon Valley to create platforms that make American democracy more robust, so that after 2020, we are resilient against fake news, we are voting at high levels [and] we are voting in an enlightened way?”

Hoffman has been backing a well-financed data project that some national Democrats see as competitive to their work, which has made him a controversial figure. And he became a lightning rod of controversy after reports emerged that he had indirectly backed a disinformation campaign in Alabama in 2017 that used Russia-style tactics to try to boost support for the Democratic candidate, Doug Jones.

But his fans say he is one of the few Democratic donors willing to roll up his sleeves and do the hard work to repair the party’s organizational failings and shore up any fundraising issues ahead of a costly general election.

Tropical depression Delta brings heavy rain and wind to the Gulf Coast
Trump’s State of the Union address: How to watch and what to expect
Hospitals are running out of staff, supplies, and beds for Covid-19 patients — and this time could b...
Iowa Democratic caucuses: Live results
The racist history of Trump’s “When the looting starts, the shooting starts” tweet
Rapid $1 Covid-19 tests exist. Why can’t we get them?