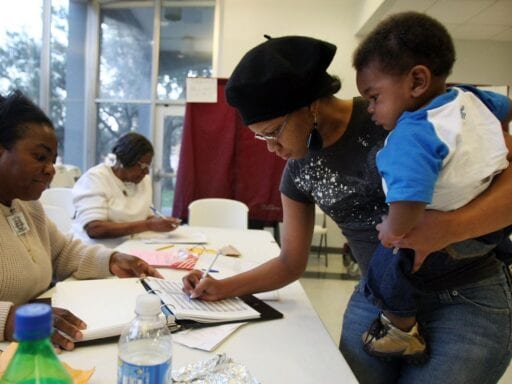 Black and Latino voters are less likely to vote by mail. That doesn’t mean they won’t vote.

On Friday, a mere four days before election day, Bloomberg ran an article that seemed designed to give Democrats a heart attack. “Senior officials on Democratic presidential nominee Joe Biden’s campaign are increasingly worried about insufficient Black and Latino voter turnout in key states like Florida and Pennsylvania,” the piece began.

A day later, the Associated Press published a piece suggesting that Democrats have less reason to worry. “So far, about 9% of the early vote has been cast by African-Americans, about on par with the 10% of the electorate Black voters made up in 2016,” the AP reported. It also pointed to states like North Carolina and Georgia, where the percentage of early ballots cast by Black voters roughly tracks the share of African Americans in the state’s overall population.

So what’s actually going on here? One possible answer is that the stories told by Bloomberg and the AP aren’t necessarily in tension. It’s possible that Black and Latino turnout lags in Florida and Pennsylvania, but Black turnout is keeping pace in North Carolina and Georgia. (It’s also worth noting that there are some indications that Biden is underperforming among Latino voters relative to 2016 nominee Hillary Clinton, even as he is overperforming among white people.)

It is likely that the raw numbers in the Bloomberg article are accurate — but that’s not necessarily a reason for Democrats to panic. Many experts anticipated that, at this point in the election, white turnout would exceed turnout among certain voters of color because white voters are more likely to cast their ballot by mail.

As Myrna Pérez, an expert on voting rights and voter suppression with the Brennan Center, told the House Judiciary Committee last June, “there has historically been a racial and age disparity in the use of vote by mail.” And there is at least some evidence that this gap continued to exist during the Covid-19 pandemic.

“As of May 3,” Pérez told the Judiciary Committee, “26.6% of White registered voters in Georgia had requested mail ballots for the June 9 primary, while just 18.5% of Black voters and 12% of Latino voters had done so.”

Pérez view was echoed by Dave Wasserman, an elections expert at the Cook Political Report, who tweeted in response to the Bloomberg report that “polling has told us all along that Black/Latino Dems are more skeptical of [voting by mail] than white Dems.”

That means that, days before Election Day, about two-thirds as many voters have voted in the 2020 election as those who cast a ballot in 2016. In some states, such as Texas, 2020 turnout already exceeds the total turnout in 2016.

According to McDonald, just under two-thirds of the over 90 million ballots that have already been cast were mail ballots. So, while early in-person ballots do play a significant role in this election — nearly 33 million people have voted early and in person — the bulk of voters who have already cast a ballot have done so by mail. And white voters are likely to be overrepresented among this group.

None of this means that Democrats, who typically rely on a multi-racial coalition to elect their candidates, can relax. Those running for public office would always prefer to have tens of millions of votes already cast in their favor rather than rely on people turning out to the polls in the future. And many election analysts point to reduced turnout among African Americans for Hillary Clinton in 2016 compared to Obama’s winning coalition in 2008 as one reason for her loss.

If many Black and Latino voters plan to wait until Election Day to cast their ballot, the presidential election could turn on how many of them actually show up. And many voters of color are likely to be forced to wait in long lines on Election Day, in part because several key states have closed polling places in Black and brown neighborhoods.

But a ballot cast on Election Day counts no more and no less than a ballot cast in advance. If Black and Latino voters do turn out, Democrats do not need to worry if these voters decided not to vote by mail.

Ex-Trump staffers should not get plum jobs at elite universities
Rod Rosenstein announces Russian indictments: “Blame for election interference belongs to the crimin...
Trump is farming out one of the hardest parts of the job to the vice president
Existential mysteries to read over the long winter to come
The four crucial questions Jeff Bezos needs to answer about his $10 billion climate pledge
What a second Trump term could mean for LGBTQ people