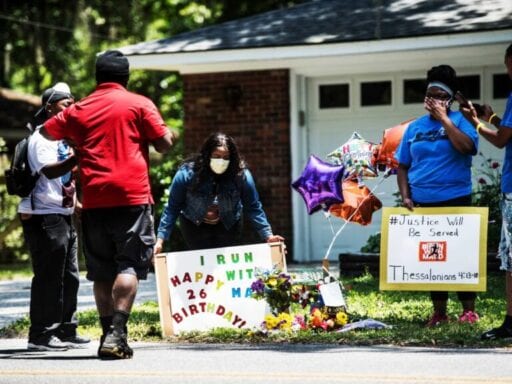 Share
Loading...
Demonstrators hold signs at a memorial for Ahmaud Arbery near where he was shot and killed in Brunswick, Georgia, on May 8. | Sean Rayford/Getty Images

Ahmaud Arbery’s death and the black Covid-19 morbidity crisis show how much African American lives are treated as expendable capital.

Ahmaud Arbery’s lynching raises the specter of slavery like the hoisting of a rebel flag.

For Ahmaud’s killers, his life was worth less than whatever they assumed he stole. For Ahmaud’s killers, protecting neighborhood property was paramount. In the months leading up to Arbery’s death, Greg McMichael, who with his son was arrested and charged in Arbery’s death, offered help to the local police to keep anyone out of a community construction site near where the events unfolded. He said residents should call him if they spotted anyone suspicious. We know many casually visited this property — black people, white people, men, women, and children. But it was a black person whom the McMichaels are accused of hunting down and killing.

In the gun barrels of vigilante citizens, under the knees of police officers, and now in the hasty reopenings of states, we have received an answer to what has been one of the essential questions of the coronavirus era: What is the value of a human life?

Some politicians have said it’s priceless. Other public policy experts argued it’s in the tens of millions. Whatever the going rate is supposed to be, it’s clear it’s less for black people. This deficit was anticipated by the Black Lives Matter movement, which years ago articulated the markdown on black lives and now seems prophetic amid news of senseless death and disease disproportionately affecting black people.

America’s racial hierarchy stratifies such that black lives regularly rank below the value of their white counterparts, under that of private property and, as witnessed in the mad dash to reopen stores, beneath that of corporate profits.

This devaluing of black people and the sacrificing of them to make money goes back to slavery. At the country’s founding, the Constitution enumerated black life as three-fifths of a white life, and the discount did not end there. Crossing over a bridge built by inequities like Jim Crow, “separate but equal,” and mass incarceration, America continues to operate under the antebellum accounting that appraises black folks as worth less. Today, whether weighed against the worth of “stolen” goods from a neighbor’s house or compared to new revenue from reopening retailers, profit margins outweigh black people’s mortality.

Historically, white homeowners react to black passersby the way Sen. Richard Burr allegedly reacts to coronavirus briefings — by selling. Through the 1970s, realtors paid black people to stroll down the sidewalks in white neighborhoods to panic owners. Spooked, white homeowners parted with their property for fear of plummeting prices.

Today, appraisers still mark down home values in black areas, and too many black residents continue to correlate with lower demand. Many white homeowners view black bodies as a threat to their property — even without a crime being committed. That notion, combined with stereotypes about innate black criminality, can form a deadly cocktail for a black man like Arbery jogging through the wrong neighborhood.

Far from fringe, Georgia’s governor bragged about conducting racist patrols in his own community. In a 2018 election ad, Brian Kemp cocks his shotgun, hops into his Ford F-350, slams his door, and drawls, “I’ve got a big truck, just in case I need to round up criminal illegals and take them home myself.” The ad could seem to serve as a dry run for two years later, when the McMichaels grabbed their guns, hopped in their truck, and went to round up their own “criminal” in the southeastern region of the state.

Kemp is the same governor who was one of the last to close his state and the first to reopen it for the sake of preserving the economy. Vice President Mike Pence praised the move. Last month, in a press conference with restaurateurs, Pence commended Georgia for being a freedom fighter on the front lines of reopening the economy. Waffle House CEO Walt Ehmer beamed, noting the company had recovered 70 percent of its revenue since the state opened.

Across the country, 80 percent of black workers do not have the ability to work from home. They’ve borne the brunt of this essential work.

Thus, while delaying closing and then fast-tracking reopening has been fantastic for short-term profits and the illusion of economic rebound, reopening has loomed ominously for many black essential workers.

Public health experts have noted an uptick in cases and hospitalizations since the reopening in the state. Last month, a study from the Centers for Disease Control and Prevention found 80 percent of Georgia’s hospitalizations were black. The study cited concerns about infections contracted during the unique occupational hazards black folks face.

“For black people, I have to say that message is one that [for] our ancestors, that’s been the story of America for us,” former Demos president Heather McGhee said in a recent interview, explaining how many business leaders have eagerly pushed their minority workforces back into the Covid-19 economy. “Where does this belief [come from], particularly among people who have a lot of money, that other people’s lives are easy fodder to make more money? That does come back to the ideology of racial slavery. It does.”

President of the Appeal Josie Duffy Rice also shared this concern after conservative politicians urged the rapid reopening of the country, tweeting “today has made it very clear how many people would have absolutely justified slavery because ‘the economy.’”

The point is simple. Many of today’s top executives and politicians manage the economy as the intellectual progeny of yesterday’s slave owners. The demographics of corporate power reflect this fact. According to a 2015 Demos report, 91 percent of American CEOs are white. Meanwhile, “across the economy, Black and Latino workers are less likely to work in professional, management, and related occupations — the highest paid occupational category in the labor force.”

In Accounting for Slavery, the University of California Berkeley historian Caitlin Rosenthal traces how plantation economics influence modern management. “It was remarkably easy for slaveholders to overlook the human costs of their profits, and it can be similarly convenient for modern managers (and consumers) to forget the conditions under which goods are made,” she wrote.

This all goes back to the legacy of slavery

The United States did not truly end slavery until the year before the birth of Donald Trump — as late as the 1940s. According to the reporting of Pulitzer Prize-winning journalist Douglas Blackmon, in the American South, enslaved black people worked in forced-labor camps. Many were chained. They toiled under the lash. Overseers worked them to death on farms, on railroads, and in coal mines. The revenue generated fueled the fortunes of titans like Coca-Cola, the Woodruff family, and Wachovia Bank. The same disregard for black lives that grew these major corporate giants back then is being summoned for the sustenance of today’s restaurants, warehouses, and retailers.

“Every day, black people confront the damning reality that we are less valued”

In his book Democracy in Black, Princeton Professor Eddie Glaude Jr. describes how Americans — pedestrians and politicians alike — discount black people’s lives the way grocers do expiring meat. “No matter our stated principles, or how much progress we think we’ve made, white people are valued more than others in this country, and that fact continues to shape the life chances of millions of Americans,” Glaude wrote, adding, “Every day, black people confront the damning reality that we are less valued.”

We know how much less.

“The discount rate on black humanity has been enormous,” he writes. “A variety of metrics indicate that, even after the end of Jim Crow, black lives are routinely assigned a worth approximately 30 percent that of white lives.”

Now, refracted through the urgent lens of the coronavirus, we are witnessing the logical ends of political rhetoric, swirling for years, which has not merely measured black life as a fraction of other lives but assessed it as a negative value.

Following demonstrations for George Floyd, Trump, the commander in chief, threatened to use the military against “thug” protestors, tweeting that “when the looting starts, the shooting starts.” The irony is painfully self-evident. Trump threatened to kill protesters for damaging property during a protest honoring George Floyd who was killed for allegedly stealing property: a pack of cigarettes.

Later, Rep. James Clyburn (D-SC) rebuffed Trump on CNN after he tried to water down the threat. “When you start taking lives because of a property crime, you take us back to a place in our history that gave rise to all of this,” Clyburn insisted.

“We all know what happened to people of color when they were accused of property crimes,” he said. “That’s what’s going on here.”

This notion that black lives are liabilities, not assets, remains pervasive in American political life. It is uniquely dangerous. When a human life is reduced to a loss of or a threat to property, it is not viewed as a life at all, but rather a wasteful expense that needs to be cut.

Maria Butina, explained: the accused Russian spy who tried to sway US politics through the NRA
The fight over She-Ra’s new redesign, explained
The 2020 VFX Oscar nominations, explained by a VFX artist
Mainstream Democrats shouldn’t fear Bernie Sanders
Trump claims he is immune from criminal investigation. A federal judge just smacked that claim down.
SNL takes on pre-election anxiety in its Halloween cold open