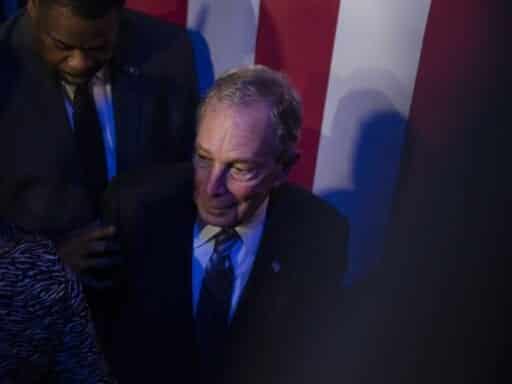 Bloomberg’s comments on trans people are another reminder he isn’t a dyed-in-the-wool Democrat.

Mike Bloomberg is spending vast sums of money to convince Democrats that he is the best candidate to take on President Donald Trump. But, as some of his recently resurfaced comments on trans issues show, the New York billionaire isn’t always in line with the party he’s running to lead.

A video of Bloomberg taken last year, in which he describes trans people as “she, he, it” and “some guy wearing a dress” emerged late Tuesday in a Buzzfeed report. His words resembled previously reported comments in 2016 describing a hypothetical trans woman as “a man in a dress” from which he has tried to distance himself recently.

In the video, taken at a March 2019 meeting of the Bermuda Development Agency held in Manhattan, Bloomberg spoke about how Democrats running for office focus on things like trans issues, which then potentially alienates everyday voters. “If your conversation during a presidential election is about some guy wearing a dress and whether he, she, or it can go to the locker room with their daughter, that’s not a winning formula for most people,” he said.

Queer supporters of Mike Bloomberg, how do you explain this to our transgender family and friends? Because they deserve a Democratic nominee that doesn’t refer to them as “it.” pic.twitter.com/HNwuxDZzhf

Instead, Bloomberg said, Democrats should focus on broader issues, like health care, education, and safety. “We’re focusing on things that have little relevance to people who are trying to live in a world that is changing because of technology and communications,” he said at last year’s forum.

It’s not an uncommon argument. The morning after Election Day in 2016, New York Times columnist Frank Bruni suggested on MSNBC that “boutique issues” like “transgender bathrooms” caused a wave of support for Trump’s candidacy. Saturday Night Live host Colin Jost made a similar comment with a joke later that week.

And to be sure, there is a difference between the two parties: The Trump administration has enacted a number of anti-trans policies a Democratic cabinet likely wouldn’t, like banning trans people from the military and proposing to undermine trans health protections. But trans rights weren’t a key animating issue for Trump on the campaign trail.

Moreover, actual electoral results fail to prove Bloomberg’s hypothesis. Nowhere in 2016 were trans issues as front and center in an election than in North Carolina, which had been locked in a heated debate over HB2, the state’s now-infamous bathroom bill. The bill passed in March 2016 and required that all people use the gendered bathroom associated with their original birth certificate in all state-owned facilities, such as schools and government buildings.

The bill’s biggest proponent was its former governor, Pat McCrory, but Democratic state attorney general Roy Cooper vehemently opposed the new law. The two then faced off in a gubernatorial race that was seen as a bellwether for the bathroom law. Cooper narrowly won in a state that went for Trump by nearly 5 percent and Republican senator Richard Burr by nearly 6 percent.

Further, Bloomberg’s narrative ignores that it was Republicans who first started the trans bathroom panic, in an effort to create a new LGBTQ wedge issue in the wake of their Supreme Court loss on marriage equality in 2015. If Democrats are more vocally supporting trans rights now, it’s because Republicans started attacking the community years earlier.

Whether a President Bloomberg would be as vocal of a supporter — let alone actively work to roll back the Trump administration’s attacks on the trans community — is a big question.

Trump has only publicly mentioned trans people a couple of times. Most famous was his July 2017 tweet announcing the trans military ban, but other than that there was a brief mention to the press just before he boarded Marine One in October 2018.

In contrast, rolling back trans rights was an immediate priority when the Trump administration took office. Just a few weeks into the new term in 2017, the Department of Education rolled back Obama-era guidelines to protect trans students, and later that year came the military ban. Over the past three years, the administration has taken steps to revoke health care non-discrimination protections for trans people and roll back protections for homeless trans people. In November, Trump’s Solicitor General argued in front of the Supreme Court that employers should be able to fire trans people simply for their gender identity.

No matter how much — or little — Trump himself thinks about the trans community, the Republican officials he’s staffed his administration with obviously have a defined stance. In order to reverse the Trump administration’s anti-trans agenda, a future Democratic administration would have to almost immediately undertake a similarly scaled effort to implement pro-trans administrative rules and policies.

Only about an estimated 0.6 percent of US adults identify as transgender, and voter ID laws can make it difficult for trans people to vote if they are in the middle of a gender transition. The community is simply too small to represent a significant voting block. When Democrats speak in favor of trans rights, they’re doing so to signal to a larger pool of progressive voters who largely care about trans issues.

Democrats, similarly, are much more likely to be pro-trans rights than Republicans. The problem for Bloomberg is that he has a long record as a Republican elected official, and he’s now running to convince Democrats that he’s one of them. While he may be reined in by a generally pro-LGBTQ Democratic party, the president still sets the administrative agenda. And Bloomberg’s resurfaced comments on trans people show that he has a long way to go to show Democratic voters that his politics align with theirs.

Bloomberg released a plan for LGBTQ rights in late January, which mostly matches up with the ideas, such as passing the Equality Act and protecting trans people from health care discrimination, of other Democratic candidates. In a statement made to multiple media outlets Tuesday, the Bloomberg campaign touted the mayor’s record on trans issues.

Mike understands that the transgender community has been under attack for decades and the advance of rights has not been equal. In April 2002, during his first year as mayor, Mike signed a sweeping transgender civil rights bill into law. His company provides comprehensive health care coverage for his transgender employees. As president, he has a comprehensive plan to secure rights for transgender Americans, including passing the Equality Act, ensuring transgender people have access to affirming health care and working to end the crisis of violence against transgender women. Mike is running to defeat Donald Trump and reverse the many policies he has implemented that attack the rights of the transgender community.

So there are two versions of Mike Bloomberg here. There’s the one from last year who says that Democrats should focus on health care, education, and safety, while claiming that trans rights are something entirely separate from those core issues. And there’s the Bloomberg from this week, who claims he wants to be a champion for the needs of trans people, which include, by his own admission, health care, education, and safety.

The trans community, which has withstood attack after attack from the Trump administration, understandably wants to know which Mike Bloomberg would be taking the reins should he get elected to the White House.