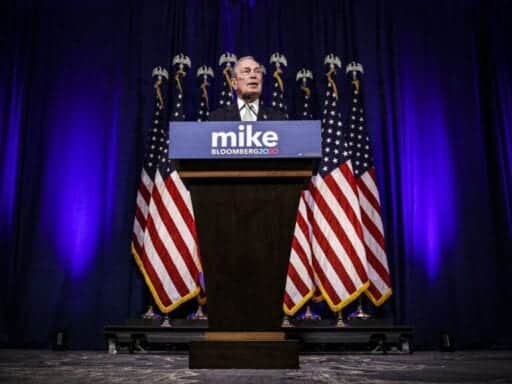 Even if Bloomberg would be a good president, he’d be a terrible precedent.

Nor is it just the ad spending that has greased Bloomberg’s rise. He’s spent a decade as a generous and effective donor to progressive causes, friendly politicians, cash-strapped cities, and worthy nonprofits. Journalist Blake Zeff has a sharp Twitter thread showing how Bloomberg has used his largesse to quiet criticism and win allies.

Bloomberg’s vast resources have unlocked a campaign strategy no other candidate could sustain. Because presidential candidates typically operate under a constant threat of running out of cash, they concentrate spending in the early primary states. Bloomberg ignored those states entirely and is blanketing the bigger, more expensive states that vote later in the primary with ads. As a result, he’s shot up in the polls and is challenging Joe Biden for second place.

But here’s the kicker: $417 million is minuscule as a percentage of Bloomberg’s $64 billion net worth. It’s a bit more than six-tenths of 1 percent — the equivalent of someone worth $100,000 spending $650. So far, Bloomberg is throwing pocket change at this election. The torrent of spending he would likely unleash in the general is orders of magnitude beyond anything we’ve seen before.

Here’s a look at ad spending through today (including future reservations:

When oligarchy arrives in America, it will wrap itself in electability

For many frightened Democrats, that is, literally, the case for Bloomberg: Whatever his faults, he carries a deep war chest he could use to defeat Donald Trump and elect congressional Democrats. That’s particularly persuasive to moderates who think Bernie Sanders’s socialism will prove politically toxic or fear Joe Biden simply isn’t up to the job. For them, Bloomberg offers an answer — a grim one, but an answer nevertheless. “Winning the presidential election is starting to look hard,” quipped Jonathan Chait in New York magazine. “How about buying it instead?”

It is easy enough to see the appeal of this argument: Trump has been a cruel and erratic president, and to his critics, defeating him is of paramount moral importance. Most Democrats believe money corrupts American politics and it’d be better if Bloomberg’s fortune were irrelevant, but the system is what it is, and winning, right now, is more important than passing some abstract purity test.

This is how bad systems corrupt good individuals — they do it by enlisting our self-interest to convince us to betray our values. And make no mistake: America’s campaign finance system is a disaster. Most candidates can’t self-finance their campaigns, so they spend a disproportionate amount of time asking the rich to donate to their campaigns. Those donations are limited to $2,800 per individual, but the Supreme Court believes political spending is a protected form of free speech, so the rich can spend as much as they want on their own campaigns, or on Super PACs to push their political agendas.

Populists like Bernie Sanders, Elizabeth Warren, and, in his complicated and contradictory ways, even Donald Trump, have risen in part because Americans loathe seeing their political system bought by the rich. Bloomberg isn’t so much a defense against those critiques as he is a confirmation of them. The populists say that politics is rigged, elections are bought by those with enough money to spend, modern liberalism is mere lipstick on perpetual corporatism. Bloomberg is here to test whether they’re right. He may pitch himself to centrists as an answer to the populists, but in leveraging his fortune to fight them, he offers the country the (hopefully) false choice between populism and oligarchy.

In response to Bloomberg’s rise, critics have filled Twitter with clips of Bloomberg blaming the financial crisis on government loans to nonwhite homebuyers (which is flatly wrong), making cruelly transphobic comments, presiding over an allegedly sexually hostile workplace, and praising the racist stop-and-frisk policies he later disowned. But Bloomberg’s candidacy would be dangerous even if every word he’d ever uttered was enlightened and his past policy record was pure.

Bloomberg is a test of what exactly it is that Democrats so feared in Trump’s dismissal of democratic restraints and liberal norms. He isn’t a class traitor or a good-government reformer who uses his fortune to pass policies that would politically neuter fortunes like his. He’s a canny politician who uses his money to secure, amass, and retain political power for him, personally. As Ross Douthat writes in the New York Times:

Trump’s authoritarian tendencies are naked on his Twitter feed, but Bloomberg’s imperial instincts, his indifference to limits on his power, are a conspicuous feature of his career. Trump jokes about running for a third term; Bloomberg actually managed it, bulldozing through the necessary legal changes. Trump tries to bully the F.B.I. and undermine civil liberties; Bloomberg ran New York as a miniature surveillance state. Trump has cowed the Republican Party with celebrity and bombast; Bloomberg has spent his political career buying organizations and politicians that might otherwise impede him. Trump blusters and bullies the press; Bloomberg literally owns a major media organization. Trump has Putin envy; Bloomberg hearts Xi Jinping.

“We can have democracy in this country,” Louis Brandeis famously said, “or we can have great wealth concentrated in the hands of a few, but we can’t have both.”

Bloomberg’s candidacy is a reminder of why. His campaign isn’t a betrayal of the political and economic system we have now but its logical extension: If we are going to allow this much wealth concentration, and if the Supreme Court holds that the rich can spend as much money pursuing their political ambitions as they want, then eventually American politics will simply become a competition between billionaires of the left and billionaires of the right, and no one will be able to stop it because it’ll feel dangerous and even immoral to unilaterally disarm and let the other side spend you into oblivion.

The good news is that this is a false choice, at least for now: There is, in truth, no evidence that Bloomberg is more electable than Sanders, Biden, or any other Democrat. The history of self-funding millionaires and billionaires is mostly a history of losing candidates, though, admittedly, no one has tried it at the scale Bloomberg seems to be envisioning.

But even if it could work, this isn’t a deal Democrats should take. There are plenty of Democrats who are as likely, or likelier, to beat Trump without further corrupting American politics. Billionaires should be able to run for president like anyone else, but they shouldn’t be allowed to buy their way to the presidency. That is a message Democrats could send by rejecting Bloomberg’s bid. If, however, they rally around him, it will be a message to every other billionaire who holds political ambitions, and America will be well on its way to becoming a true oligarchy.

Even if Bloomberg would be a good president, he’d be a terrible precedent.