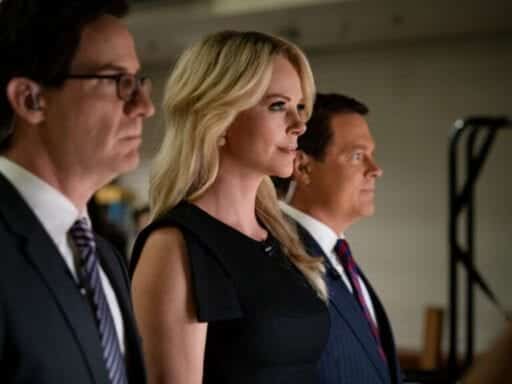 The new film is a shockingly bad take on a very important issue.

The weirdest beat in Bombshell comes at the end, and I suppose you could call this a spoiler except you and I both know what happened to Roger Ailes. In July 2016, the disgraced former head of Fox News — played by an extremely jowly John Lithgow in the film — was abruptly ousted from his job after several women at the network accused him of sexual harassment. He was barred from the building he once reigned over (though not without taking a cushy $40 million with him). And then he died less than a year later.

Ailes’s forced resignation at the hands of his bosses, NewsCorp founder Rupert Murdoch (Malcolm McDowell) and his sons Lachlan and James (played by brothers Ben and Josh Lawson), happens late in the film. And once he’s out, father and sons take over, striding through the newsroom as Rupert takes a phone call. It’s from “Donald.” (You know, Donald, the film winks.)

It seems, for a second, that the rather unsteady-on-its-feet Bombshell is about to stick the landing. Three women in particular — Gretchen Carlson (Nicole Kidman), Megyn Kelly (Charlize Theron, in many prosthetics), and fictional news producer Kayla Pospisil (Margot Robbie) — have stood up to the big boss, who cultivated a hostile work environment and sexually harassed them, and taken him down.

But don’t forget that it’s July 2016. We not only know what happened to Ailes, we also know what comes next: An old tape will resurface, and the world will hear Donald bragging about “grabbing [women] by the pussy.” But he’ll still get elected, largely thanks to Fox News. As late as December 2019, commentators at the network will still be filing sexual harassment claims. Nothing’s going to change.

It’s a great setup for a soaring, pointed conclusion. But Bombshell turns that flying leap into a faceplant. The film issues a proclamation, These women “got the Murdochs to put the rights of women above profits, however temporarily,” and asserts, ominously, that they won’t be the last. Patriarchy, watch out!

The movie ends triumphantly, with a distinct flavor of rah-rah girl power. Look what women can do when they band together! Let’s hear it for the ladies! Three cheers for Gretchen and Megyn and Kayla and the whole gang!

Bombshell is hopelessly clueless about the reality of its own story

The level of naiveté required to cap off a story like Bombshell’s with an inspiring, “Women rule!” pop anthem is unfathomable to me. Even if we set aside the politics of fear peddled by Fox News itself, the idea that women banding together is all it will take to end harassment is obviously unearned optimism. If anything, the story of Bombshell is a dark and pessimistic one — the tale of an institution that systematically devalues its female employees’ humanity, where any change was purely cosmetic, face-saving, a way to stop the gap in a dam they helped build.

Others have written at length about the way Bombshell elides the contributions that its characters, and in particular Megyn Kelly, have made to the worldview peddled by Fox News. Director Jay Roach (who made the Austin Powers movies and the Meet the Parents movies, as well as the assiduously bland or outright terrible political films like Game Change and Trumbo) isn’t concerned; he’s said that with Bombshell, he was trying to make a movie about a nonpartisan issue.

And in some ways, he did. Workplace sexual harassment is a plague, and though its pervasiveness in the Fox News culture is well–documented, it clearly knows no political bounds.

There are moments in Bombshell where the film suggests it’s aware of this, and tries to demonstrate, presumably for the sort of people who think maybe the women are overblowing the matter, the way sexual harassment makes life a living hell for victims, even when they go along with it out of helplessness. Kayla, the fictional young evangelical and “influencer in the Jesus space,” gets the worst of Ailes’s advances; leggy and blonde and ambitious, she’s called into Ailes’s office, where he talks nicely to her about her future at the network, then asks her to stand up, turn around, and hike her skirt up — way up.

That’s hardly the end of it, but most of what follows is kept behind closed doors and offscreen. Instead of showing the full brunt of what happens to Kayla, the film moves between Kayla and two other women. There’s Kelly, who’s sparring with Trump in the presidential debates and trying to ignore her sense that if she speaks up about Ailes’s harassment of her in the past, it may take him down. And there’s Carlson, who has grown more angry about the misogyny at the network over time and is ready, when the opportunity presents itself, to sue.

Bombshell isn’t good satire, but it’s not good drama, either

For its first half-hour or so, Bombshell feels like it might be a smug but darkly clever satirical romp. At times it seems like everyone in Hollywood has gathered together to join in on the “fun.” But it never really becomes clear what or who they’re satirizing. Ailes comes off as a guy who sexually harasses people because he feels bad about his body, which just makes him a pitiable figure. The newsroom has the air of a frat house, though one where closeted lesbian and closeted liberal Jess Carr (a fictional character played by Kate McKinnon) can stick around if she keeps her mouth shut.

But how that frat house atmosphere was established remains unclear, and which aspects of it the film wants to target are fuzzy. If satire is the use of exaggeration and ridicule to point out how bad something is, then Bombshell suffers from not knowing where to point. (It also suffers, painfully, from not being funny.)

By the time we reach the movie’s earnest conclusion — dare we call it feminist? — Bombshell has discarded all pretense of satire. Now, its goal is different: to convince women they ought to speak up and band together to take down sexual harassers. Which feels more than a little like a cop-out; the problem isn’t the victims, it’s the harassers and the people who make excuses for them.

And viewed in tandem with knowing what came before and after, it’s hollow Hollywood feminism at its peak. Being a feminist, or at least a powerful woman, means sticking your neck out to take down the bad apples. But the tree that grew the apples is too often still rotten to the roots. And there are a lot of other trees rotting in the same soil.

When women get together, we can change the world, Bombshell declares. We’re a bunch of heroes, little soldiers, talking to one another, taking down the bad guys. But we’ll have to do it forever, you know. Because nobody wants to chop down a tree that grows gold.

Bombshell opened in limited theaters on December 13 and will open nationwide on December 20.

Every platform that has cracked down on Trump this week
The Capitol rioters put themselves all over social media. Now they’re getting arrested.
The Saudi crown prince reportedly hacked Jeff Bezos
Trump makes unfounded voter fraud claim — while campaigning for seat opened by GOP cheating
The best case for and against a fracking ban
The disturbing hypothesis for the sudden uptick in chronic kidney disease