Border arrests dropped in August. That doesn’t mean the crisis is over. 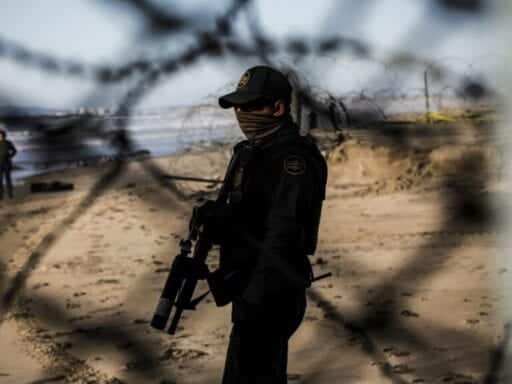 Share
Loading...
A US Border Patrol officer with a tear gas canister walks by a border fence on December 2, 2018. Migrants have crossed to the United States near this area in Tijuana, Mexico, | Atilgan Ozdil/Anadolu Agency/Getty Images

Border arrests fell 30 percent in August, but migrants are still facing a humanitarian crisis in Mexico.

The number of migrants arrested at the southern border dipped again in August, according to preliminary data from US Customs and Border Protection (CBP), and President Donald Trump is touting it as a victory for his immigration policies.

Ted Hesson of Politico reported Wednesday that apprehensions of migrants, which are usually seen as a proxy for overall unauthorized immigration, had dropped 30 percent in the span of a month, down to about 51,000 in August.

The dip is unusual, even accounting for the fact that arrests tend to decline over the summer months when it is dangerously hot to make the journey across the border. Last year, apprehensions dropped from about 40,000 in May to 31,000 by July, about a 22 percent dip, before bouncing back up in September, according to CBP.

Trump may claim that he is delivering on his promise to secure the southern border, but it’s not so clear that his policies have done anything to address the underlying problem: unprecedented numbers of migrants fleeing Central America. Instead, he might just be shifting the burden of dealing with the migrant crisis to Mexico, which is ill-equipped to offer humanitarian aid.

The Trump administration and its allies are declaring victory over the numbers. Trump has credited Mexico’s assistance for the reduction in apprehensions, including the deployment of 15,000 Mexican troops to the country’s northern border in June after Trump threatened to impose tariffs on Mexican goods. “Mexico has never helped on the border and they are now,” he told reporters Wednesday. “The numbers are really good.”

Dave Ray, a spokesperson for the Federation for American Immigration Reform, which advocates for reducing immigration levels and has long informed Trump’s immigration policies, wrote in the Daily Caller earlier this week that the preliminary numbers were reason for “cautious optimism” that the administration’s tactics are working.

“If this decline continues through the fall months, then it’s safe to say that we have a new positive trend in our nation’s fight to end ‘catch and release’ and regain control of our borders,” he wrote, referring to immigration officials’ practice of arresting migrants and then releasing them into the US while they await deportation proceedings.

But the drop in apprehensions doesn’t mean that the crisis is over, at least not for the migrants trying to seek asylum in the US. More than 37,500 migrants have been turned away to Mexico as a result of Trump’s “Remain in Mexico” policy, officially known as the Migrant Protection Protocols, under which they must await a decision on their US asylum applications abroad. Both migrants who wait in line at ports of entry and those who try to cross the border outside ports of entry without authorization can be subject to the policy if an asylum officer finds their claims credible.

In Mexico, asylum seekers face dangers of kidnapping and sexual assault, overcrowded shelters, and slim employment prospects. They have difficulty finding lawyers, without which their cases are almost surely doomed to fail.

The Transactional Records Clearinghouse at Syracuse University found that, by the end of June, only 1.2 percent of the 1,155 migrants whose Remain in Mexico cases had been decided were able to obtain a lawyer. Al Otro Lado, one of the few legal service providers for migrants based in Mexico, has even reported death threats by suspected criminal groups to their staff, inhibiting them from doing their work.

With Mexico unprepared to absorb migrant flows, Trump’s policies stand to exacerbate what is already a humanitarian crisis. But if border arrests are low, the president might think it’s not his problem.

Democrats call Trump’s coronavirus relief orders “paltry” and “absurdly unconstitutional”
How the Democratic presidential candidates would combat the opioid epidemic
“Black Lives Matter” has become a global rallying cry against racism and police brutality
Some brands are closing stores for the global climate strike. That’s a big deal.
How Trump undermines the best part of his foreign policy
House Democrat: here are 8 scandals Congress should investigate instead of Twitter bias