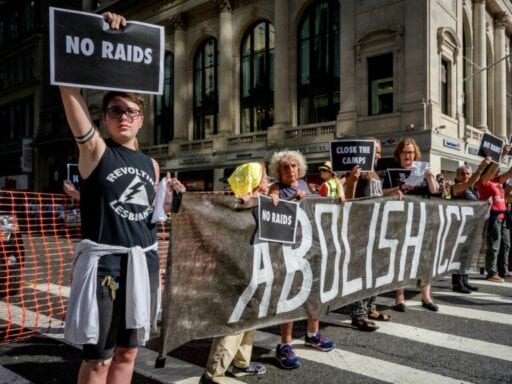 Acting Customs and Border Protection commissioner Mark Morgan said there are investigations the public is “unaware of.”

On CNN’s State of the Union, host Jake Tapper asked Morgan why Immigration and Customs Enforcement — which Morgan led until early July — hadn’t conducted any raids or investigations into Trump’s eight properties given reports that the clubs and hotels employ undocumented people.

“You really can’t say that for sure,” Morgan said. “There are investigations going on all the time that you’re unaware of. … Of course it’s going to jeopardize the investigation if I come on here and I talk to you about an investigation that’s going on.”

The question came days after a massive ICE raid on a Mississippi chicken processing plant. The worksite raid was one of the largest of its kind in US history; 680 people suspected to be unauthorized workers were abruptly arrested and separated from their families.

Tapper asked why employers who hire undocumented workers are not always punished along with the workers themselves; the host cited Syracuse University’s immigration records research that found only 11 people and no companies were prosecuted for employing undocumented workers between the spring of 2018 and 2019. During the same time frame, 85,727 people were prosecuted for entering the US illegally.

Morgan responded that an investigation into the business that employed the undocumented workers in Mississippi is ongoing.

Among the companies that have not been prosecuted for employing undocumented laborers, however, are those owned by President Trump, despite the Trump Organization having reportedly hired undocumented workers for decades.

What we know about hiring at Trump properties

Multiple news outlets have reported on the Trump Organization’s longstanding reliance on the very people the president often discusses with derision: undocumented immigrants.

Most recently, the Washington Post reported on construction crews at Trump properties being comprised of largely of undocumented workers, even after Eric Trump, one of the president’s sons and a Trump Organization executive, said the company was making a “broad effort” to identify and fire undocumented laborers. One worker told the Post he was even instructed by a supervisor to buy fake documents on a street corner in New York City.

Employing workers without legal status gives the company a competitive advantage, industry officials told the Post. And undocumented laborers are less likely to risk job changes and are less likely to complain if they’re being mistreated.

Trump “doesn’t want undocumented people in the country,” one former Trump Organization worker, Jorge Castro, told the Post. “But at his properties, he still has them.”

Trump’s businesses rely heavily on documented foreign laborers as well. As Vox’s Alexia Fernández Campbell reported, the Trump Organization makes use of the US’ H-2B visa program. Campbell found that only one out of 144 jobs available at Trump properties during 2016 and 2017 went to an American worker, and that the Trump administration has expanded access to H-2B visas:

The H-2B visa program allows seasonal, non-agricultural employers — like hotels and ski resorts — to hire foreign workers when they can’t find American ones. The Trump administration temporarily expanded this guest-worker program in 2017 while restricting other avenues of legal immigration, including the H-1B program for high-skilled workers.

Mark Krikorian, executive director of the Center for Immigration Studies, told Fernández Campbell that the company’s reliance on H-2B visa holders, and Trump’s expansion of the program in 2017, creates a competitive advantage similar to the one gained by employing mostly undocumented workers: being able to avoid paying higher wages or better benefits for American workers.

The Trump Organization has said it is making efforts to ensure all of its workers are citizens or documented immigrants. The company has fired nearly two dozen people due to their immigration status since the New York Times reported on undocumented workers at the Trump Organization’s golf club in Bedminster, New Jersey last December, and has adopted a system for verifying employment eligibility.

But firing undocumented workers — and instituting widespread policies intended to flush them out of the US labor market — may have the unintended consequence of placing stress on an economy desperately in need of low-skill workers.

There’s practically no way for a low-skilled worker from Guatemala to “wait in line” for a visa to take a job at a chicken processing plant in Mississippi. Only one such visa exists — the EB-3 visa — but it’s limited to a tiny number of people (5,000 max).

Yet the US economy needs hundreds of thousands of workers to fill these jobs right now. The US is experiencing a serious labor shortage, and it’s harder for businesses to find low-skilled workers these days than high-skilled workers.

As president, Trump has pushed an immigration plan that favors migrants prepared for high-skill jobs, that gives advantages to immigrants with advanced college degrees. But those jobs are, for the most part, already filled. There are a surplus of jobs available for low-skilled workers, however, and not enough Americans to fill them.

Immigrants who want to take those open jobs have two options, Fernández Campbell writes: The H-2A program for farm workers and the H-2B program for seasonal workers, such as those working at Trump hotels. There are only around 75,000 visas available annually for those guest workers, and they don’t cover jobs like those at the plant raided last week in Mississippi.

The limits on those visas and the need to staff low-skill positions have been some the main reasons behind a spike in undocumented immigrants in the US since the 1990s, according to Madeleine Sumption and Demetrios Papademetriou of the Migration Policy Institute. There simply aren’t that many ways immigrants looking for low-skilled work can legally get work in the US.

Trump’s policies may make the labor shortage worse, industry experts say, including at his own properties. If he hopes to keep the economy growing, it will require rethinking restrictive policies that have been the cornerstone of his platform.