Boris Johnson is making good on his Brexit plans 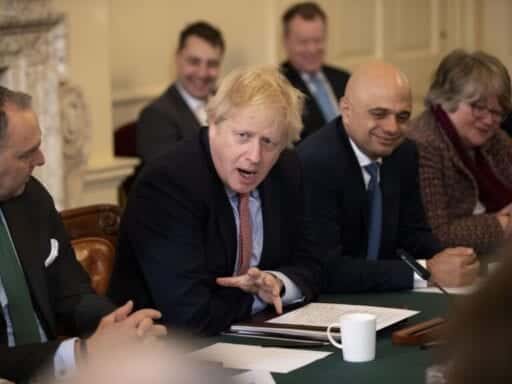 The prime minister is moving ahead on his Brexit deal — and wants to get a trade deal with the EU by the end of 2020.

Less than a week after winning a landslide victory in the United Kingdom’s general elections, Prime Minister Boris Johnson is laying out plans to fulfill his signature campaign promise: getting Brexit done.

On Tuesday, the prime minister’s office said Parliament could hold its first vote on Johnson’s Brexit deal as early as this Friday. That would be the first step toward the UK leaving the European Union by the current deadline of January 31, 2020.

This should surprise no one: Johnson campaigned on the promise to withdraw the UK from the EU early next year, and he now has a foolproof, 80-seat majority to get it done.

That means the UK and the EU would have to strike a new trade deal between January 31 and before December 31, 2020. That’s about 11 months, for those counting.

This may all sound like boring technical details, but it could be a pretty significant move. That’s because Johnson’s decision limits his options and puts the UK at risk of a new “cliff edge” — an economically perilous EU crash-out — this time in December 2020.

Brexit is really a two-part process. The first part is the divorce, and this is what consumed UK politics up until this point. Johnson’s Brexit deal will allow the UK to formally break up with the EU in January.

Once that happens, the UK and EU will then enter a standstill period in which the UK will continue to follow the EU rules, but won’t have any decision-making power in the body. During this time, the UK and the EU expect to work out their permanent relationship — the second part of the process — trade being the major line item.

That transition ends December 31, 2020, but the UK and the EU can renew it for up to two years, until 2022. This seems reasonable, given how knotty trade deals can be. Plus, Johnson wants to pursue a free-trade-style deal, pulling the UK out of the EU’s economic institutions such as the single market and customs union.

(It’s also probably worth noting that this transition period was agreed to under May’s deal in the fall of 2018. It hasn’t adjusted to account for the UK’s year-long Brexit delay. So even the initial standstill period was never intended to be short.)

But Johnson and his Conservative Party promised during the elections that they would not extend the transition past 2020. This hard deadline appeased the ardent Brexiteers in Johnson’s party, and most critically, Nigel Farage and his populist Brexit Party.

The latter agreed to stand down in the elections and not challenge the Conservatives, and part of the reason Farage gave was Johnson’s commitment not to extend the transition past 2020. Johnson can probably credit some of his enormous victory to the Brexit Party’s decision to rally behind him during the election.

The problem is that this 11-month timeline is somehow very tight.

The next phase of Brexit is the hard part

The EU has expressed skepticism that it can get everything completed in this timeframe, though Michel Barnier, the EU’s chief negotiator, has said that the EU will do the “maximum” to get a deal done on time.

If the UK and the EU can’t reach a deal, this would basically be a no-deal Brexit by another name: a crash-out of the EU’s trading structures without a plan in place. The British pound nosedived Tuesday on this news, over worries on what might happen if the UK doesn’t have a trade deal in place by this time next year.

And this is the big concern: that the UK is closing off the exit ramp in case talks between the UK and the EU go poorly. The UK and EU don’t have to make a decision on extending the transition period until the end of June 2020, but the prime minister doesn’t seem interested in waiting to see how things go. This is increasing the odds that the UK could fail to make a deal, or rush into one, with unexpected consequences.

Then again, Johnson is doing what he promised to do, risky or not. Some analysts suggested that Johnson, with such an overwhelming majority in Parliament, might dial back some of his more aggressive Brexit promises or pursue a softer Brexit, as he would no longer beholden to the hardcore Brexiteers to get his agenda done. Unlike with the last Parliament, this time around he can afford a few rebels. But he seems to be moving ahead with the original plans.

It’s still not clear exactly what changes Johnson will make to the Brexit legislation, so everything is a bit uncertain. But with a strong majority behind him, Johnson seems to be making the case that a shorter timeline will create a sense of urgency to push the UK and EU toward a realistic deal. If this strategy fails, though, the outcome will be a lot worse for the UK.

Finding beautiful baby decor in a sea of plastic
How the media should respond to Trump’s lies: State of the Union edition
The phone call that could get Trump impeached
The infuriating experience of coronavirus testing, explained by a patient
Analyst: U.S. tariffs are a game of 'Whac-A-Mole'
New coronavirus cases reported at reopened Tesla factory. This doesn’t look great for Elon Musk.