Boris Johnson refuses to ask the EU for a Brexit extension. Some experts say he may go to jail for it. 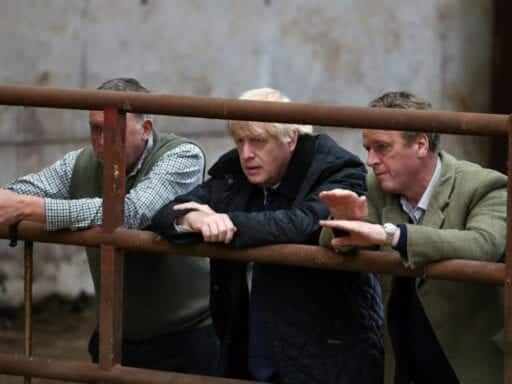 Johnson has faced a number of setbacks in Parliament recently, but has said the UK will still leave the EU on October 31.

British Prime Minister Boris Johnson plans to stick to his refusal to ask the EU for a Brexit extension despite the resignation of one of his ministers and Parliament passing a bill requiring him to do so.

Johnson has said he would “rather be dead in a ditch” than ask the European Union for more time to come up with a Brexit deal, and two of his top officials said Sunday the prime minister still feels that way. That doesn’t sit well with his political opponents and legal experts, however, who say he could be sent to prison if he follows through on his promise to flout the new law.

That specter of jail time is the latest bad news for Johnson, who has already had a really bad week and weekend as the new prime minister.

Saturday, Amber Rudd, a senior cabinet member, quit over concerns that Johnson wasn’t actually trying to reach a Brexit deal before the October 31 deadline. Johnson lost his whip in Parliament last week when he kicked him out of the Conservative Party, along with 20 other Tories who voted for mandating a request for an extension. To add insult to injury, his own brother resigned from Parliament on Thursday over Brexit disagreements, saying he’s “been torn between family loyalty and the national interest.”

Observers have said it seems like Johnson’s government is falling down around him, and the clock is ticking: the prime minister now has until October 19 to come up with a deal or he’ll be forced by law to go to Brussels to ask the EU for more time — or, apparently, spend some time behind bars.

How the United Kingdom got here

The United Kingdom’s current predicament began with a 2016 referendum in which voters decided to leave the European Union. The nation has failed to manage to do so for three years, bringing citizens to the current political drama, which starts with Johnson, who has promised the UK will leave the EU by the end of October with or without a deal.

A deal negotiated by Johnson’s predecessor, Theresa May, exists, but that exit plan was rejected by Parliament three times. Johnson believes he can get a better deal, but the EU has refused to renegotiate the terms of the UK’s divorce with him.

Johnson believes proclaiming his willingness to leave the EU without a deal will force Brussels back to the negotiating table, given that a no-deal Brexit would cause economic chaos across the continent. While that may be true, a no-deal Brexit would hurt the UK more than it would the EU — there have been warnings of drug and food shortages and recessions across the kingdom post no-deal exit. As Vox’s Jen Kirby put it, “it’s not easy to just ghost a decades-long trading and economic partner.”

While Johnson remains staunchly pro-Brexit, deal or no deal, a majority has emerged in Parliament that is adamantly opposed to a no-deal scenario. That majority transcends party lines, and includes the major opposition party (the Labour Party), smaller opposition parties such as the Liberal Party, and, notably, 21 former members of Johnson’s Conservative Party who were kicked out for helping to pass the law ordering the prime minister to request a Brexit extension.

To add to this mayhem, Johnson is now hoping to get around the choice of an extension request or prison by calling for elections as soon as possible — these elections would essentially let the British people decide whether they want Johnson’s plan or whether they require a deal before Brexiting.

However, because Johnson can’t call for new elections without the consent of Parliament, and because Parliament is refusing to give that consent, it’s unclear, as Kirby has explained, when (and if) those new elections will happen.

What may happen next

Johnson has made it clear what he wants to do next: to continue towards an exit from the EU on October 31 no matter what. And he has said he does not want to ask for more time.

What happens if October 19 passes without an extension request is less clear. A number of experts and officials said Johnson could be found in contempt of court and face prison time. “A refusal in the face of that would amount to contempt of court, which could find that person in prison,” former prosecutor Lord MacDonald said.

A former Supreme Court judge, Lord Sumption, disagreed, telling Sky News that a more likely scenario is that a judge would rule that another senior government official pursue the extension request in Johnson’s stead.

Whether the EU’s 27 members (all of which would have to agree to approve an extension of Brexit negotiations) will sign onto a request for an extension is another matter.

French officials said this weekend that they would not vote to give the UK yet another extension unless the kingdom can get itself together and decide what it wants.

“We are not going to go through this every three months,” French foreign minister Jean-Yves Le Drian said. “Let them take responsibility for their situation, they have to tell us what they want.”

Le Drian added, “The [British] say that they want to put forward other solutions, alternative arrangements so that they can leave. But we have not seen them and so it is ‘no.’”

Hosting the Olympics comes at a massive cost
Democrats formally launch an impeachment investigation — even though some say it’s already happening
Jane the Virgin’s joyous series finale is a perfect hour of television
Exclusive: Tony Blair sees dangerous times ahead for Western democracies
Bernie Sanders wants to ban police use of facial recognition tech
The surprising past, unlikely present, and uncertain future of Christmas in July