Bran knows Jaime should live on Game of Thrones. He also isn’t above a savage burn. 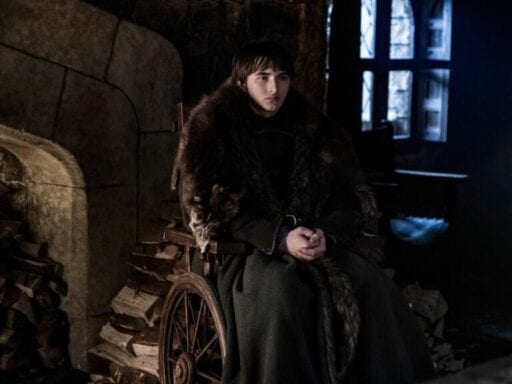 In “A Knight of the Seven Kingdoms,” Bran Stark’s line, “the things we do for love,” was a savage Jaime Lannister callback.

On Game of Thrones, Bran Stark is the Three Eyed Raven, a being with the power to see everything that’s happened in the past and everything that will happen in the future. Considering all the lies, betrayals, murders, manipulations, politics, and nefarious plans that exist in this story, this is an invaluable power to have.

But it also comes in handy if you ever need the most savage of drags.

In the final season’s second episode, “A Knight of the Seven Kingdoms,” Daenerys Targaryen, Jon Snow, and Sansa Stark have put Jaime Lannister on trial. As the episode begins, Sansa and Dany are stating all the reasons why they shouldn’t trust Jaime, based on his close ties to the evil queen Cersei Lannister (a woman who dealt Sansa Stark a life of trauma and pain) and how he was once part of a rebellion that overthrew the Targaryens — Jaime killed Daenerys’s father.

Faced with these charges, Jaime tells Sansa and Dany that he has pledged to fight on the side of living, despite his past. He also defends himself, saying he was acting in the name of his family.

And that’s when Bran hits him with a one-liner: “the things we do for love.”

Jaime’s face drops — he looks like he’s seen a ghost.

The reason for Jaime’s shock is that years ago — at the end of Game of Thrones’ very first episode — he pushed Bran out the window of a tower. Bran had stumbled upon Jaime and Cersei having sex, and Jaime and Cersei didn’t want anyone to find about their incestuous affair. Right before he pushed Bran, Jaime says, “the things I do for love.”

For Jaime, those “things” ostensibly included being willing to murder children, as Bran learned the hard way.

In “A Knight of the Seven Kingdoms,” the only people who know the significance of this quote are Bran and Jaime — and all of us watching at home. It’s Bran’s way of telling Jaime that he hasn’t forgotten what Jaime is capable of. However, as we see later on in the episode, Bran, because he’s now the Three-Eyed Raven, knows the importance of his encounter with Jaime so many years ago, for better or for worse; he points out to Jaime that he would never even have become the Three-Eyed Raven if it weren’t for what Jaime did. He also understands how important Jaime is to defeating the Night King, and a dead Jaime Lannister isn’t good to anyone but the White Walker army.

But though he has apparently transcended any personal vendetta he feels toward Jaime, it seems that he isn’t above a gentle dragging.

There have now been 50 million confirmed cases of Covid-19 worldwide
Netflix says Disney and Baby Yoda may have cut into the streaming service’s growth
Carol Anderson recommends 4 books on America’s broken political system
The Trump administration’s latest steps to undermine the Affordable Care Act, explained
How The Report condenses the post-9/11 CIA torture report into a devastating paranoid thriller
The Doomsday Clock is now at “100 seconds to midnight.” Here’s what that means.