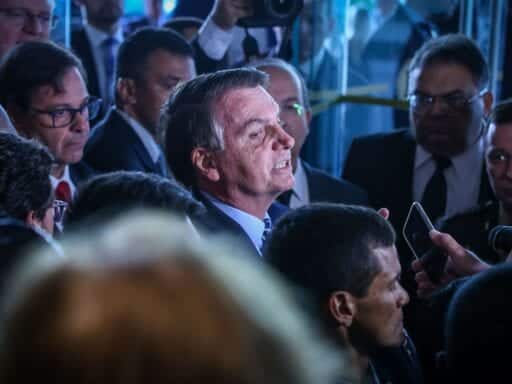 Brazilian President Jair Bolsonaro on Friday announced that he has tested negative for the coronavirus, contradicting earlier reports — including from his son — that he’d tested positive.

Posts on his official Facebook and Twitter accounts said that “The Armed Forces Hospital and (diagnostic laboratory) Sabin have returned a negative test result for COVID-19,” the official name of the disease. Bolsonaro included a photo of himself flexing.

The Brazilian leader, who is 64, was tested for the coronavirus earlier this week after his top aide, press secretary Fábio Wajngarten, tested positive for the virus. That result came after Bolsonaro, and Wajngarten, had visited with President Donald Trump at Mar-a-Lago over the weekend, which means the US president could also been exposed to the virus.

Rumors circulated on Thursday that Bolsonaro had also tested positive, though Brazilian officials denied the reports, and Bolsonaro later said publicly, wearing a face mask, that he was awaiting test results.

But the cycle repeated itself on Friday, this time in Brazilian media. O Dia, a major Brazilian newspaper, reported Friday morning that a preliminary test had shown Bolsonaro had tested positive, citing sources in the far-right leader’s administration. Fox News confirmed that with Bolsonaro’s son, Eduardo, but added that the Brazilian president would undergo a second test to confirm the diagnosis.

But just about an hour or so later, Bolsonaro himself said publicly that he had tested negative. A few minutes after that, he tweeted, “NÃO ACREDITE NA MÍDIA FAKE NEWS!“ which basically means “Don’t believe the fake news media,” if that sounds familiar at all.

Bolsonaro’s son has since denied that he ever said his father initially tested positive. “I don’t have this information,” Eduardo Bolsonaro told Fox News around the same time as his father’s announcement. “The information I have is the results that just came up telling that he is negative for coronavirus. I never listened that it was positive in the first exam. This is something that I don’t know. But, uh, everything’s good now.”

So the official word from Brazil is that Bolsonaro does not have the coronavirus. But the situation is pretty troublesome, as it raises questions about whether the Brazilian government, including its top leader, is being completely forthright — particularly when it comes to how he’s communicating about the pandemic to Brazilians and the rest of the world.

Bolsonaro has downplayed the coronavirus. It’s part of his broader “fake news” strategy.

Bolsonaro is often compared to Trump, and they do have a lot in common, especially when it comes to attacking the media or opponents as fake or dishonest when they criticize his policies or approach or basically say anything he doesn’t like.

Bolsonaro also takes advantage of conspiracy theories and misinformation to bolster his support. He dismisses science, especially when it comes to climate change and the fate of the Amazon rainforest, and he uses propaganda to scapegoat minority groups to sow division.

As plenty of social scientists will tell you, attacking legitimate news as fake and peddling misinformation doesn’t just breed distrust in institutions. It can create information overload, overwhelming people so it becomes harder to distinguish between what’s real and what’s fake, which prompts them to give up.

That is especially, acutely dangerous in public health crises like the coronavirus pandemic, when people need to trust the expertise of public health officials to protect themselves and others and keep from panicking. Brazil has more than 150 cases of coronavirus as of March 13, with its first case diagnosed on February 26.

Yet Bolsonaro has downplayed the coronavirus, as recently as this week. “During the past year, obviously, we have had moments of crisis. A lot of that is fantasy,” he said at a conference in Miami on Tuesday. “And coronavirus, which is not all the mainstream media makes it out to be.”

After he returned to Brazil, he took a more serious approach. He held a Facebook live event where he wore a face mask, and did say that he was being tested for the virus (though he attacked the “fake news” for saying he’d tested negative when his results had not come back yet). He also said Thursday that the World Health Organization had acted “responsibly” when it declared the coronavirus a pandemic, and discouraged a rally of his supporters.

But Bolsonaro is continuing his attacks on the media, looking to score political points rather than using his testing experience and his recent exposure to people with the virus to show citizens how serious and undiscriminating the virus can be.

Trump has not self-quarantined, despite meeting with Bolsonaro aide

Bolsonaro’s visit to Mar-a-Lago has implications for other world leaders, specifically President Donald Trump and Vice President Mike Pence, the latter of whom is leading America’s coronavirus response.

But Bolsonaro, along with Wajngarten, the press aide who tested positive for the coronavirus, didn’t just visit with Trump and Pence at Mar-a-Lago over the weekend. Other US lawmakers were also present for the meeting, including Sens. Lindsey Graham (R-SC) and Rick Scott (R-FL), who have since placed themselves in self-isolation due to those contacts.

Miami Mayor Francis Suarez — who met with Bolsonaro and his staff this weekend when they visited Florida — also announced Friday that he’d tested positive for the coronavirus.

The White House said Thursday that Trump or Pence did not currently require testing for the coronavirus because they had “almost no interactions” with Wajngarten. Still, this goes against the CDC’s guidelines that instruct individuals to separate themselves if they are “reasonably believed to have been exposed to a communicable disease but not yet symptomatic.”

Trump, like Bolsonaro, has downplayed the coronavirus. In February, Trump said the coronavirus was “very much under control in the USA,” while also saying the number of cases would remain low and that it might go away in warmer weather, of which there’s no evidence right now.

“Thirty-two is too many,” he added of the number of cases then. “But when you look at the kind of numbers that you’re seeing coming out of other countries, it’s pretty amazing when you think of it. So, that’s it.”

The number of cases in the US has since risen sharply, with dozens of deaths as of March 13. While the Trump administration is taking increased measures, including an imminent national emergency declaration, the president can’t easily undo his previous mixed messages, or his spread of misinformation. The same goes for Bolsonaro.

Why Senate Democrats just tanked the Republican police reform bill
The US won’t give visas to same-sex partners of UN officials anymore
How do you know what you see is “real”?
E-boys are the new teen heartthrobs — and they’re poised to make serious money
EBay is suing Amazon for “racketeering” and anti-competitive practices
Elizabeth Warren calls for investigation into Trump’s politicization of Covid-19