Brazil’s indigenous land is being invaded 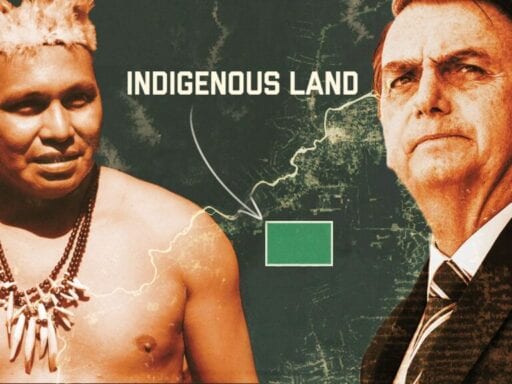 And the country’s president is part of the problem.

The fight to preserve the Amazon rainforest has taken many forms. In Brazil, the government has banned all extractive industries on some pieces of land, and allowed some activity on others. But arguably the most effective way to preserve the rainforest has been giving it back to the people who have been there the longest.

Brazil is home to over 900,000 indigenous people, many of whom live in the Amazon. They are descendants of people who lived in the rainforest for centuries without destroying it. But like many place around the world, these indigenous people were brutally persecuted when Europeans arrived. In Brazil, indigenous people were systematically pushed off their land by the government and even killed well into the 20th century.

In 1988, things changed. Brazil enacted a new Constitution that gave historic rights to indigenous people; including the right to get their land back. It’s resulted in the creation of nearly 400 indigenous reserves, many of which are in the Amazon. Here, indigenous people are free to keep their traditions, language, and culture alive. In most cases, that includes an expert preservation of the rain forest.

But things are again changing for the worst. The rise of agriculture has put Brazil’s indigenous people at risk again. Their lands are being invaded by farmers, ranchers, and land grabbers eager to make a profit. To make matters worse, Brazilian President Jair Bolsonaro is not coming to the rescue.

For the full story, watch the video above. It’s part of a three-part Vox Atlas series on the Amazon.

You can find all of Vox’s Atlas series on YouTube. And if you’re interested in supporting our video journalism, you can become a member of the Vox Video Lab on YouTube.