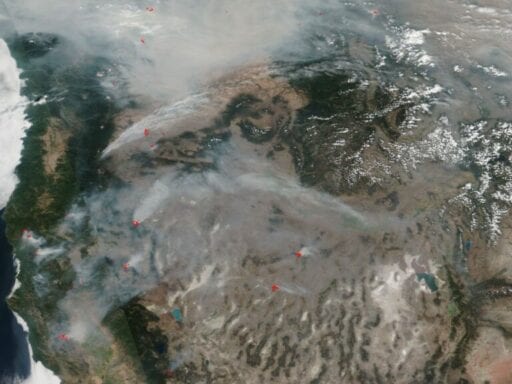 Major wildfires are delivering choking haze to much of the western United States.

Ash and smoke are choking Seattle’s air for the second week in a row, as wildfires smolder in the Cascades and in British Columbia.

As of Tuesday morning, the Air Quality Index in Seattle was at 181, a rating classified as “unhealthy.” In parts of the city, the index rose as high as 220, which is “very unhealthy.” To put it in perspective, an AQI of 150 is roughly equal to smoking seven cigarettes in a day. That means residents should avoid being outside and exerting themselves, particularly people with heart and lung problems, the elderly, and children.

On August 15, many noted that air quality in Seattle was worse than in Beijing, one of the world’s most notoriously polluted cities.

The flames from some of the massive wildfires that have raged from Alaska to New Mexico have destroyed homes and taken lives, but the smoke and ash in the air are one of the most insidious threats to health. Since nearly 2 million acres have burned in the United States this year from 109 fires in 12 states ranging from Alaska to New Mexico, many regions are affected.

Speechless… mainly because I’d have to open my mouth and breathe in to talk. And that seems like not a great idea. #wawx pic.twitter.com/gSX1Z1X5xK

Wildfires have ignited in the Pacific Northwest before, but usually Seattle’s weather quenches flames and clears smoke pretty quickly.

That the region has remained so hot and dry this year, allowing smoke to linger, is highly unusual, Andrew Wineke, a spokesperson for the state Ecology Department’s air quality program, told Q13 Fox. But it also happened last year.

The smoke has wafted thousands of miles across the country to New York State and has shrouded many Western states in haze. Here is a smoke forecast map of the United States as of Tuesday morning:

Though wildfires throw off particles of all shapes and sizes, the biggest health dangers come from the smallest ones, 2.5 microns or less in diameter. Known as PM2.5, these particles penetrate deep into the airways, causing inflammation, asthma attacks, and cancer.

“Generally, we think that the smaller it is, the more likely it is to make you sick,” Jia Coco Liu, a postdoctoral researcher studying air quality at Johns Hopkins University, told Vox last year. In sufficient quantities, these tiny particles can make the air too dangerous to breathe.

Yeah, it’s bleak. If you have to go outside to embrace the horror, er, the smoke, make sure you have the right mask. https://t.co/kTwgFZAcKK #wawx pic.twitter.com/9SwywqKdPh

Wildfires are a completely natural event in many parts of the country. However, their growing scale and devastation stem largely from people, from igniting the fires themselves to building in high-risk areas. And as the smoke from these fires shows, even people far away stand to suffer more as climate change raises average temperatures, drying out trees and increasing the burned area from fires.