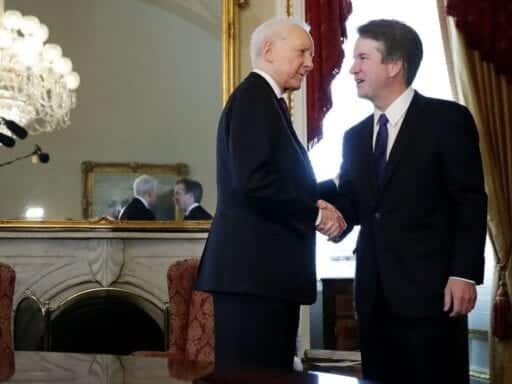 From the CFPB to the EPA to the ACA to net neutrality, a consistent thumb on the scales for capital.

Once upon a time in the misty days of the American past, an aggressively progressive Supreme Court stalked the land mandating school desegregation and holding that Americans’ individual liberties included the right to use contraceptives and seek abortions. An echo of the Warren Court’s legacy lived on until the present day on the legally narrow but politically and culturally salient question of gay and lesbian Americans’ rights to live free and equal lives as citizens.

As every action calls forth a reaction, this long-ago progressive court called into being a reactionary counter-rhetoric that disdained “activist judges” and celebrated the humble wisdom of democratic self-government. Brett Kavanaugh’s nomination turns the counterargument into the central argument and redefines the mission of the Court.

While it’s certainly true that a few important remnants — most notably, some semblance of a legal right to abortion — of that old debate remain relevant, the real debate in the American judiciary is whether the Constitution allows the people’s elected representatives to meaningfully regulate the national economy.

But rather than debate this squarely, we are instead faced with grifters like Kavanaugh’s former boss Ken Starr insisting in the pages of the Washington Post that Kavanaugh stands for nothing more than a simple “pro-democracy, let-the-people-govern-themselves vision.” The truth is quite the opposite — Kavanaugh’s vision, which he shares with Starr and the bulk of the conservative legal academy, is one in which the courts should stand as staunch allies of capital and block any effort at democratic control of big business.

A classic example is the Clean Air Act, which charges the Environmental Protection Agency with identifying forms of harmful air pollution and promulgating rules to cost-effectively reduce it, rather than counting on Congress to pass new laws every time science or business practice changes. To make this system work, judges need to show deference to the regulatory agencies and acknowledge that the congressional reformers who created them wanted the agencies to have some flexibility and discretion. Kavanaugh, as Starr correctly observers, does not believe that this deference should be granted. This is a crucial aspect of his judicial philosophy, and Starr is right to call attention to it.

In one of the most startling developments of American history, the Reconstruction-era Congress passed the 14th Amendment to try to establish black people’s civil rights, only to see Gilded Age courts rule that the 14th Amendment’s reference to “due process” prohibited all kinds of economic regulations — including civil rights laws! — ultimately culminating in the Lochner-era jurisprudence that was discredited in the 1930s but that many conservative intellectuals are now trying to rehabilitate.

Meanwhile, we have in recent years begun to see the outlines of a new form of it, this time invoking the First Amendment rather than the 14th. This began with the discovery first in Buckley v. Valeo but then later in McConnell v. FEC and continuing to the better known Citizens United case that the constitutional prohibition on censorship also prevents Congress from enacting any kind of meaningful restraint on rich people’s ability to purchase influence in the electoral system.

There’s no telling exactly how far the Court will push this logic, but the pernicious thing about it is that the initial premise in the campaign finance cases that there is an intimate connection between money and speech is not totally absurd. Most economic activity, at the end of the day, has at least some kind of expressive component, and one could conceivably invalidate anything from a statute punishing fraudulent banking practices to a minimum wage law as a limit on people’s right of self-expression. The crucial issue is the lens of values and priority through which one sees the world.

Brett Kavanaugh: “No president has ever consulted more widely or talked to more people from more backgrounds to seek input for a Supreme Court nomination.” pic.twitter.com/26LSUnSobB

Trump labels impeachment a “coup”
How to talk someone out of bigotry
Want to help animals? Here’s where to donate your money.
Trump believes Americans are “starting to feel good” about Covid-19. They’re not.
Just because you’re working from home doesn’t mean your boss isn’t watching you
Watching Skyscraper is like watching someone play a video game starring The Rock