Brett Kavanaugh was already unpopular with voters. The new allegation could reignite opposition. 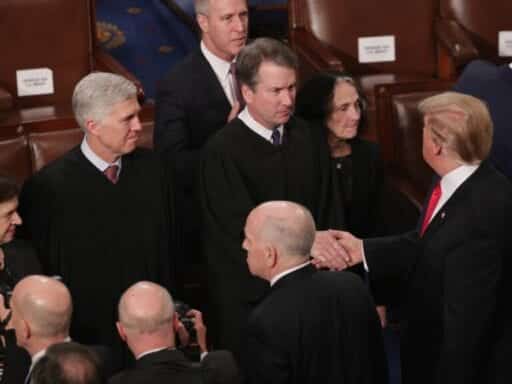 New reporting about the Supreme Court Justice’s past could have big implications for the Court and 2020.

Almost exactly a year ago, Christine Blasey Ford testified before the Senate Judiciary Committee that Brett Kavanaugh had sexually assaulted her when the two were in high school. He became a Supreme Court Justice anyway.

Now two New York Times reporters have uncovered new evidence backing up another woman who accused Kavanaugh of sexual misconduct: Deborah Ramirez, who says that Kavanaugh thrust his penis in her face without her consent when they were undergraduates at Yale.

Ramirez was never invited to testify before the Senate, and her allegation received less public attention than Ford’s. But Times reporters Robin Pogrebin and Kate Kelly were able to find at least seven people who heard about the incident long before Ramirez ever went public. They also found another former Yale student, Max Stier, who saw a similar incident at a different party: Kavanaugh with his pants down, while friends pushed his penis into the hands of a female classmate. The justice has denied Ford’s and Ramirez’s allegations, and has not yet answered the reporters’ questions about Stier’s account.

The new reporting has already lead to calls for Kavanaugh’s impeachment by Democratic presidential candidates. And it is likely to amplify the questions many voters have had since the confirmation hearings last year about whether Kavanaugh should be making decisions that affect the direction of the country — and whether the Supreme Court can retain its legitimacy when one of its justices faces multiple allegations of sexual misconduct.

The new allegation reignites controversy around Kavanaugh’s confirmation. That could have big implications for the Court and the country.

Ramirez was the second woman to come forward with an allegation of sexual misconduct against Kavanaugh. Ford came forward under her name last September, telling the Washington Post that when she and Kavanaugh were high school students in the 1980s, he had pinned her to a bed, tried to remove her clothes, and covered her mouth when she tried to scream. “I thought he might inadvertently kill me,” she said. Kavanaugh denied the allegation, saying, “I did not do this back in high school or at any time.”

Ramirez came forward several days later, telling Ronan Farrow and Jane Mayer of the New Yorker about an experience she said happened at a party in the 1983-84 school year. She said that Kavanaugh pushed his naked penis in her face without her consent, leaving her “embarrassed and ashamed and humiliated.”

Kavanaugh denied this allegation as well, saying that if it had occurred, it would have been “the talk of campus.” But, Pogrebin and Kelly write, “our reporting suggests that it was.”

The Times reporters talked to at least seven people who heard Ramirez’s account before Kavanaugh ever became a judge, including two Yale classmates who heard about it days after the party happened. They also uncovered an account by Max Stier, another former Yale classmate, who saw Kavanaugh with his pants down at a different party, with friends pushing his penis into the hands of a female student. (Stier has not spoken publicly, but reported his account to the FBI and senators, and two officials corroborated it to the Times.)

Despite the allegations, and Ford’s testimony, Kavanaugh was confirmed last October. Views on the judge were divided along party lines, with 60 percent of Republicans believing Kavanaugh and 59 percent believing Ford in one September poll. President Trump helped stoke those divisions when he mocked Ford publicly at a rally in Mississippi.

But there’s evidence that, after the confirmation, Americans in general took a dim view of Kavanaugh. A PerryUndem poll conducted last December found that 57 percent of voters thought he lied under oath, and 49 percent viewed him unfavorably (compared with 27 percent who viewed him favorably). Americans were also skeptical about Kavanaugh’s future performance on the Court, with just one third saying he would be impartial on issues Democrats support or on issues involving sexual misconduct (the remaining voters were split between thinking he would not be impartial and being unsure).

The allegations against Kavanaugh may also have affected the behavior of the Court. Before they became public, many saw Kavanaugh as a potential deciding vote to overturn Roe v. Wade, the 1973 decision that established Americans’ right to an abortion. But since Kavanaugh joined the Court, it has been slow to take up issues of reproductive rights, leading some to speculate that after such a contentious confirmation process, the justices were less than eager to take up a controversial issue that would again put Kavanaugh in the spotlight.

The new allegation, however, puts the justice — and the Court — in the spotlight once again. Two Democratic presidential candidates — Sen. Kamala Harris and former Housing and Urban Development Secretary Julián Castro — have called for impeachment proceedings against Kavanaugh.

As Vox’s Anya van Wagtendonk notes, impeachment would require the support of the Senate, which is unlikely given the current Republican majority. An investigation in the House, which is controlled by Democrats, may be more likely.

Meanwhile, the Women’s March, the group that helped organize massive protests around the country and the world in the wake of President Trump’s election, has organized a protest in Washington on October 6, calling for a congressional investigation into the allegations against Kavanaugh. The protest was announced before the latest allegation became public, but it is likely to receive more public attention now.

The makeup of the Supreme Court could be a major voting issue in 2020, as the next president will likely get to appoint at least one justice. And the latest allegation against Kavanaugh may heighten concerns about the Court among voters, many of whom were already worried that Kavanaugh would not be an impartial judge.

With the confirmation hearings a year in the past, the justices — and President Trump — may have hoped the controversy around Kavanaugh was fading into the background. But the new reporting by the Times brings it to the fore again — and that could have big implications for the Supreme Court, the 2020 election, and the country as a whole.

Desperate candidates toss out memes, new taglines, and #whiteobama in SNL’s Democratic debate
The 13 best premieres we saw at Sundance
“Our calm is contagious”: How to use mindfulness in a pandemic
Thursday’s historically bad economic growth numbers, explained
The White House projects 100,000 to 200,000 Covid-19 deaths
Hawley tries to cancel Senate Democrats for “canceling” him