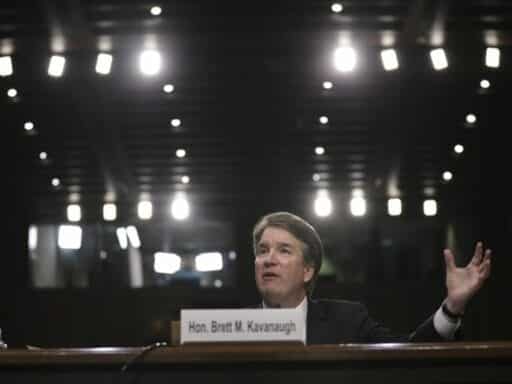 “Now I feel like my civic responsibility is outweighing my anguish and terror about retaliation.”

The woman who has accused Supreme Court nominee Brett Kavanaugh of forcing himself on her when they were in high school has reluctantly come forward, telling the Washington Post that Kavanaugh pinned her down, groped her over her clothes, and tried to take off her bathing suit and outer clothing in a frightening assault.

Christine Blasey Ford, a professor at Palo Alto University in California, spoke to the Washington Post’s Emma Brown in an article published on Sunday. She revealed herself to be the author of a letter to Sen. Dianne Feinstein (D-CA) that was eventually sent to the FBI about the alleged incident.

Ford had been in contact with the Post for weeks but had declined to go public with her allegations, fearing retaliation and public attacks. Her calculations changed after the news of her letter broke broke earlier this week, and ultimately, she said, she came forward out of concerns that reporters would soon identify her and a sense of public duty.

“These are all the ills that I was trying to avoid,” Ford told the Post. “Now I feel like my civic responsibility is outweighing my anguish and my terror about retaliation.”

The Intercept reported on Wednesday that Sen. Feinstein had received a letter from a California constituent about an incident between a woman and Kavanaugh while they were in high school but had not shared the document with other Democrats. Feinstein said in a statement that she indeed had information about Kavanaugh but that the individual had “strongly requested confidentiality.” On Friday morning, the New Yorker’s Ronan Farrow and Jane Mayer published details of the allegations in the letter, but the identity of the woman involved was not revealed.

Kavanaugh has denied the allegations against him “categorically and unequivocally,” saying he “did not do this back in high school or at any time.” Senate Judiciary Chairman Chuck Grassley (R-IA) had his office publish a letter signed by 65 women Kavanaugh knew in high school saying he “treated women with respect.”

The identity of the woman bringing the allegations was not known — until now.

Ford alleges that sometime during the early 1980s, she was at a party when Kavanaugh and one of his friends and classmates at Georgetown Preparatory School, Mark Judge, were drunk and corralled her into a bedroom. Per the Post’s account:

While his friend watched, she said, Kavanaugh pinned her to a bed on her back and groped her over her clothes, grinding his body against hers and clumsily attempting to pull off her one-piece bathing suit and the clothing she wore over it. When she tried to scream, she said, he put his hand over her mouth.

“I thought he might inadvertently kill me,” said Ford, now a 51-year-old research psychologist in northern California. “He was trying to attack me and remove my clothing.”

Ford said she was able to escape when Kavanaugh’s friend and classmate at Georgetown Preparatory School, Mark Judge, jumped on top of them, sending all three tumbling. She said she ran from the room, briefly locked herself in a bathroom and then fled the house.

Ford told the Post she didn’t tell anyone about the incident in detail until 2012 when she was in couples therapy with her husband. The therapist’s notes from the time, which the publication reviewed, say that Ford reported being attacked by students “from an elitist boys’ school” who went on to become “highly respected and high-ranking members of society.”

The notes don’t name Kavanaugh, and they say four boys were involved, not two. Ford told the Post this was the therapist’s error — there were four boys at the party, she said, but only two in the room. Notes from another individual therapy session in 2013 show that Ford talked about a “rape attempt” in her teens.

Her husband, Russell Ford, said that in 2012 his wife talked about being pinned down and molested and said he remembered her using Kavanaugh’s name. Ford’s lawyer also had her take a polygraph test in August, which found she was being truthful.

Ford says she doesn’t remember many details of the event, such as how she got home, the exact year it took place, or how the gathering was put together.

According to the Post, Ford contacted the publication through a tip line in July when it “became clear” Kavanaugh might become President Donald Trump’s Supreme Court pick and contacted her congresswoman, Democrat Anna Eshoo, around the same time. In late July, she contacted Feinstein.

It’s not clear what this means for the Kavanaugh nomination

Kavanaugh has vehemently denied the allegations and refused to comment any further when the Post contacted the White House on Sunday. Judge told the Weekly Standard on Friday that the situation was “absolutely nuts” and that he had never seen Kavanaugh “act that way.” The FBI, which handles background checks on government appointees, said it had added Ford’s original letter to Kavanaugh’s file, meaning the White House and other senators will be able to review it.

Still, whether it will make a difference as to what happens to Kavanaugh’s Supreme Court nomination is unclear.

As Vox’s Li Zhou pointed out, Grassley’s office before the New Yorker story was published told CNBC that the Senate Judiciary Committee would move forward with the confirmation process as planned, including a committee vote on Thursday.

Alabama Democratic Sen. Doug Jones predicted on Sunday that Kavanaugh’s nomination would likely move forward in an appearance on CNN’s State of the Union — unless the accuser was revealed. It was also before the Post’s story. “There’s really not much that can be done unless this person comes forward and you can see this and talk to the person who wrote that letter,” he said.

After Ford came forward, Jones and multiple other Senate Democrats called for Kavanaugh’s nomination to be delayed.

Election officials are scrambling to get their cut of Mark Zuckerberg’s $250 million
Last week the US wanted to break up Big Tech. Now it’s trying to supersize it.
California solves batteries’ embarrassing climate problem
The Supreme Court’s landmark new Native American rights decision, explained
Pro-Trump protesters rally for a coup: “We’re not going anywhere”
How Trump and Republicans are obstructing the impeachment process