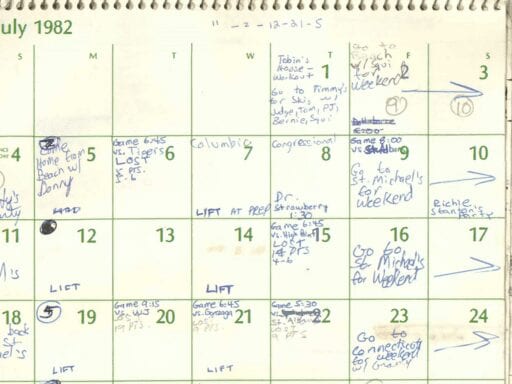 Kavanaugh is trying to use his high school calendar to prove he didn’t sexually assault someone.

Supreme Court nominee Brett Kavanaugh is trying to use his high school calendar, which details numerous beach trips, parties with friends, times he was “grounded,” and his exercise routine, to prove that he never sexually assaulted someone while at Georgetown Prep.

The calendar covers the summer of 1982, around the time Christine Blasey Ford said Kavanaugh drunkenly pinned her down at a house party, groped her over her clothes, and tried to force himself on her. Kavanaugh has aggressively denied the allegations, saying he was never present at such a party.

Ford has said she doesn’t remember the exact day and place where the assault happened. According to her account in the Washington Post, Ford said she learned about the house party through word of mouth at the Columbia Country Club pool in Chevy Chase — where Kavanaugh remains a member — and said the house wasn’t far from the country club. She named Kavanaugh and Mark Judge, who Ford says was in the room when Kavanaugh assaulted her. Judge has also denied the allegations.

The calendar doesn’t directly prove or disprove anything, but it does provide some insight into Kavanaugh’s life in high school at Georgetown Prep, an elite all-boys private school in Bethesda, Maryland. His summer was spent going to the beach with friends and family, weekends at St. Michaels, a waterfront resort town in Maryland, and numerous parties.

Kavanaugh himself made his behavior in high school relevant. In an interview with Fox News, he insinuated that he never drank underage and falsely claimed the “drinking age was 18, and yes, the seniors were legal and had beer there.” The drinking age was raised to 21 in Maryland when Kavanaugh was 17.

As Vox’s Matt Yglesias writes, all the external evidence we have of Kavanaugh’s time in high school — from his yearbook entry about being the treasurer of the Keg City Club to his 2015 comment that “what happens at Georgetown Prep stays at Georgetown Prep” — puts his latest comments about drinking in question.

Kavanaugh will likely be getting questions about some of these entries — for example, what he meant when he wrote, “Go to Timmy’s for skis w/ Judge, Tom, PJ, Bernie, Squi..”

Ousman Darboe could be deported any day. His story is a common one for black immigrants.
Silicon Valley’s top investing firm has a stark message on coronavirus: Prepare for the worst
Quarantine cooking is about more than just feeding yourself
Trump and Kim Jong Un won’t sign a deal in Vietnam
How Senegal stretched its health care system to stop Covid-19
The Trump campaign’s boast about impeachment polling is actually an own goal