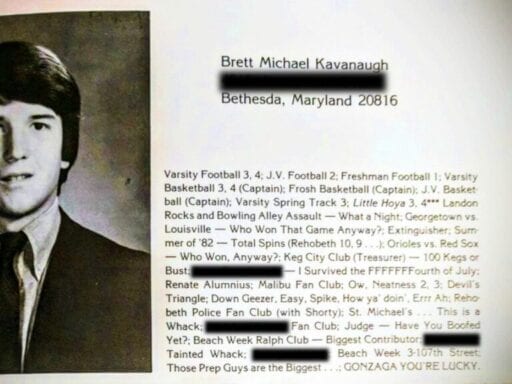 The raunchy joke isn’t a good look considering the allegations against the Supreme Court nominee.

For all the nostalgia they can inspire, school yearbooks are often full of things we’d rather forget: unflattering pictures, suggestions from people we may have liked more than they liked us urging to “keep in touch” or “have a good summer,” and awkward memories of who we once were.

Rarely do they serve as anything more than a sometimes bittersweet record of a very specific time in our lives. But in a major exception, the meaning of yearbooks and what young humans write in them, or rather used to write in them, is currently at the center of a national conversation with history-making repercussions, because of what Supreme Court nominee Brett Kavanaugh and his longtime friend and former classmate Mark Judge wrote in corresponding 1983 senior yearbook messages.

Three women have brought allegations of sexual misconduct and assault against Kavanaugh, describing drunken acts they say Kavanagh committed in high school and college. Kavanaugh has flatly denied those allegations, including in a televised interview with Fox News in which he presented himself as a virginal square. Now, there’s a debate over what type of person Kavanaugh really was in high school and who he is today, and his yearbook entry has become an artifact that might help discern the truth from fiction.

Of particular interest is the phrase, “Judge, have you boofed yet?” which appears on Kavanaugh’s senior yearbook page and seemingly corresponds to the phrase, “Bart, have you boofed yet?” which appears on Judge’s page. Judge, as Slate explains, published Wasted: Tales of a Gen X Drunk, a 1997 memoir about his experience with alcoholism in high school that featured a character named “Bart O’Kavanaugh,” a reference to his real-life friend with the strikingly similar name.

Many have subsequently wondered what it means to “boof,” and the definition may now underpin the argument that a man who’s being considered for a seat on the Supreme Court might also be someone who has demeaned and assaulted women.

The history of the word boof, explained

One of the most concrete examples of it being used, though in a different context, is in the cult classic movie Teen Wolf. The movie was released in 1985, a couple years after Kavanaugh and Judge wrote their yearbook entries. In it, Scott (Michael J. Fox) has two love interests, the blonde dreamgirl Pamela Wells (Lorie Griffin) and the brunette girl next door, Lisa “Boof” Marconi (Susan Ursitti).

Who Scott chooses isn’t as telling as the shock felt by some viewers — there’s actually an old message board conversation about it — that the movie featured a character known as Boof.

There’s also another, totally different instance of “boof” being used in the 1980s. In 1981, two years before Kavanaugh’s yearbook entry, a man named John Paul Bonser was born. Bonser would grow up to become a professional baseball pitcher for the Minnesota Twins, Boston Red Sox, and the Oakland A’s. If the name John Paul Bonser doesn’t ring a bell even to baseball fans, it’s because he legally changed his name to Boof Bonser in 2001.

Bonser has said that his mother gave him the nickname when he was a child, but never explained what it meant. “I don’t really want to know why, to be honest with you,” he told the New York Time in 2006. “I guess I had no reason to go up and ask her. I just left it at that.”

It’s very difficult to find established usage of “boof” in publications of the era, which is understandable given its risqué apparent definition and that it was slang. But in that message board conversation about Teen Wolf, a user who self-identified as being from the East Coast provided a corroborating account that “boof” grew out of “Bu-Fu (pronounced boo-foo), which was in turn short for butt fuck.”

There’s a similar account, posted in 2006, on this kayaking message board. In the kayaking world, “boof” is the name for a technique kayakers use when paddling toward a waterfall, and has nothing to do with sex of any kind. Kayaking aficionados who participated in the discussion were tickled to learn that the maneuver had another, very different meaning.

Today, the slang version of the term has mutated slightly. It still involves one’s rear end, but it now appears to mean ingesting alcohol or drug through one’s butt. A simple search on Reddit, Quora, Urban Dictionary or Twitter confirms as much (and yields multiple tips and tricks for doing it, too).

Trying to read between the lines of someone’s senior yearbook page is a strange exercise. But it’s not unlike the way, in 2018, we write our own narratives on social media, or piece together stories about other people we follow on social media.

We regularly share things that we think define us — from a cause we’re volunteering for to a joke we find funny to a political argument we agree with to a picture we think we look attractive in. We may have a desired outcome in mind, but we can’t control what the people who see our updates think. The way outsiders interpret the way we present ourselves is completely up to them.

On one hand, it’s easy to compare Kavanaugh’s senior yearbook entry to a Twitter or Instagram feed and write it off as a kid being a kid. Kavanaugh undoubtedly put forth a specific persona in his yearbook, just like any modern teen would do today.

But on the other hand, Kavanaugh is now up for one of the most powerful positions in the United States and his senior yearbook entry, along with a wall calendar he maintained at the time, is one of the only concrete things we have to refer to when processing serious allegations of sexual assault that have been brought against him from that time. Like it or not, they paint a picture of what he was like a teen and a young man.

Christine Blasey Ford, who attended an all-girls high school while Kavanaugh attended Georgetown Prep, says that Kavanaugh pushed her down on the bed, covered her mouth to muffle her protests, and tried to remove her clothes. She says that Kavanaugh’s friend Mike Judge was in the room at the time.

Deborah Ramirez, the second woman to come forward with an allegation against Kavanaugh, says that in college, he thrust his penis into her face while laughing.

And Julie Swetnick, the third woman to come forward with allegations against Kavanaugh, says that she witnessed Kavanaugh and his friends take advantage of inebriated women at parties and that she was assaulted at one of these parties. (She did not directly say that Kavanaugh assaulted her.)

Kavanaugh has repeatedly denied all of the allegations made against him and presented a very chaste version of himself as a teenager:

“I was focused on academics and athletics, going to church every Sunday at Little Flower, working on my service projects, and friendship,” he said in his Fox News interview. “I did not have sexual intercourse or anything close to sexual intercourse in high school or for many years thereafter.”

And to be clear, one can still go to church, perform service projects, and not have sexual intercourse, yet still commit sexual harassment or assault. But the disconnect here is that when he was a teen, Kavanaugh presented himself in a very different way, in part through a yearbook entry that appears to be rife with jokes about heavy drinking (“100 kegs or bust” and “Beach Week Ralph Club”) and sex, including “Have you boofed yet?” among others (“The Devil’s Triangle” and “Renate Alumnius”).

None of these things confirm that Kavanaugh committed sexual assault, nor do they confirm that he isn’t the man that he says he is. It’s possible that they were empty brags and jokes.

But Kavanaugh hasn’t really provided a compelling reason to believe who he says he is. And regardless of what he actually meant by “Have you boofed yet?” it’s no wonder, in light of the allegations made against him, that many people searching for answers have questioned his intentions in using the term.

How your mobile carrier makes money off some of your most sensitive data
Mississippi says goodbye to Confederate emblem and adopts a new state flag
Better data, better maps: How Biden could make huge strides on environmental justice
“Lock her up!” In Phoenix, the signature Trump rally chant was especially ironic
5 performances that show why Fred Willard was hilarious, groundbreaking, and beloved
How a far-right politician’s scandal brought down Austria’s government