Brexit is here. But what happens next? 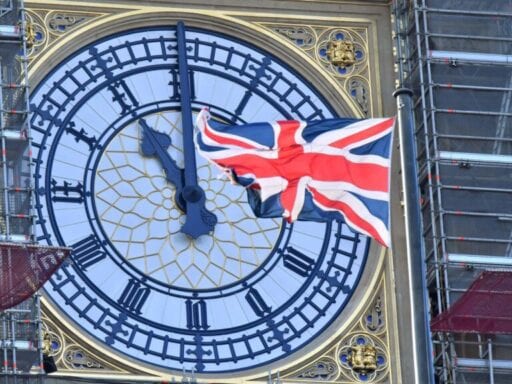 Share
Loading...
A British flag in front of the clock face of Elizabeth Tower, known by its bell, Big Ben. | Photo by JUSTIN TALLIS/AFP via Getty Images

Brexit, and why it’s not actually over, explained.

UK Prime Minister Boris Johnson will speak ahead of the big moment, where he will promise a “new dawn” for the country. A countdown clock will project onto his residence at 10 Downing Street. Members of the Brexit Party will throw a, well, Brexit party, in Parliament Square. Having failed to raise enough cash to get the under-renovation Big Ben to bong at the moment the UK exits, Brexiteers will instead play a recording of the sound on an “excellent” speaker system.

Anti-Brexiters will be in a much less celebratory mood, and some protests are expected across the country. There may also be some drinking (of European wine, of course) and an effort to get “Ode to Joy,” the EU’s official anthem, to the top of the UK music charts.

And that’s basically it, unless you’re into commemorative coins. Otherwise, after the clocks strikes 11, things won’t be all that different than they were at 10:59.

That’s because the UK and EU will not disentangle immediately. Instead, the UK enters into a transition period in which the two sides will try to hash out the future relationship.

So while Brexit is here, it’s not really done.

Here’s a quick guide to what actually happens on January 31, and what comes after — as much as anyone can predict.

What happens on January 31?

The UK had to formally give the EU notice that it wanted out by triggering Article 50 — the provision in the EU’s Lisbon Treaty that gives countries the power to withdraw from the bloc.

The UK did this in 2017; that set off a two-year countdown clock to March 2019. When the UK couldn’t resolve Brexit, and neither the UK nor EU wanted to break up without a deal in place, the EU continually agreed to push back that date, first to April 2019, then to October 2019, then to now.

Now that both sides have agreed to, and formally ratified, the Brexit deal, they’re letting Article 50 run out.

This matters because once the UK is out, it’s, like, out out. The UK can’t change its mind. If, say, for some reason, it regrets it all and wants back in, it has to apply for membership like everyone else (under Article 49), and all 27 member-states have to agree.

So January 31 at 11pm is essentially the point of no return — but it won’t seem like it.

What will happen during the transition?

The transition (or implementation) period begins once the UK officially exits, and will last until at least December 31, 2020. Very little will actually change: UK will continue to follow all EU rules, only now it will have no say in what those rules are, since it won’t be an EU member anymore.

The UK and the EU will then have figure out what their future relationship will look like over the course of the next 11 months. Which is a very nice way of saying the hard part of Brexit is yet to come.

All the hullabaloo over the Brexit deal during the past year revolved around the withdrawal agreement, which essentially laid out the terms of the divorce. The two sides had always planned to divvy up these phases. First, deal with the breakup, then figure out if we want to stay friends.

The EU and the UK both have an interest in maintaining a strong relationship, but exactly what character it will take is what the next phase is all about.

The starting point for these negotiations will be something called the “political declaration”, which sets out broad principles (“establishes the parameters of an ambitious, broad, deep and flexible partnership across trade and economic cooperation with a comprehensive and balanced Free Trade Agreement at its core” — you get the idea ) but lacks details on how, exactly, these goals will be achieved.

The big one, of course, is trade. The UK is leaving the EU customs union and single market, so the two sides want to work out a trade agreement, ideally with no tariffs, no quotas, and keeping trade barriers low.

But it’s not just trade. The two sides have to discuss security and law enforcement cooperation, access to fishing waters (this is a big one!), banking, data and intelligence-sharing, manufacturing, and a whole lot more. Everything the EU and the UK did together before, they now have to figure out how they can do it together now that they’re apart.

Experts told me this could very well be the stumbling block that holds up the next phase of Brexit negotiations, too.

So yeah, a lot needs to be worked out. On the EU side, officials are skeptical a comprehensive agreement on trade, let alone all the other things, can be completed in 11 months. Or, really, less than that: After Brexit happens tonight, the two sides will set out their negotiating priorities, but talks won’t begin in earnest until March.

It doesn’t have to be this much of a time crunch. The transition period can be extended, one time, for up to two years, until the end of 2022.

But Johnson campaigned on the promise that he would not extend the transition period, and he eliminated that possibility from the Brexit legislation that just became law. Laws can be amended, but right now, Johnson has given no sign he’s willing to budge on the 11-month timeline.

There is one other wrinkle: If the UK and the EU decide they have no choice but to extend the transition, they have to decide that by the end of June 2020, which is baked into the Brexit deal.

That means the EU and UK likely can’t go down to the wire, seeking last-minute extensions, in the same way they did in the first phase of Brexit. Which makes the first months of negotiations after Brexit even more urgent.

Or, as one Irish official put it, a feat “nearly without precedent.”

A deal is not impossible, but warning signals are already blinking. EU leaders have been clear that if the UK wants to retain access to EU markets, it’s going to need to align its rules and regulations closely with the ones already in place.

If “Irish backstop” was the defining phrase of the first part of Brexit negotiations, get ready for “level playing field” to be the defining phrase of the second part. The EU wants to guarantee a “level playing field” with the UK in any free-trade agreement, basically to prevent the UK from so drastically changing their economic regulations (such as giving huge tax breaks or subsidies to companies) or environmental or labor standards that it could undercut the EU.

Brussels is really quite nervous right now, because the UK has said it wants to make its own rules. After all, to Brexit supporters, the whole point of leaving the EU was to, you know, freaking leave it: to get away from all of its onerous regulations.

And the more the UK wants to diverge from the EU, the harder it is likely going to be reach a future agreement on trade and everything else. Which makes the already tight timeline even tighter.

Johnson and the EU could decide in June to extend the transition period, giving them more time and pushing negotiations to as late as 2022. But assuming that’s not happening, and the EU and the UK don’t have a trade agreement (or other deals) in place, one could perhaps call this a “no-deal” scenario.

Yes, that’s right. The no-deal Brexit is back, back again.

All the catastrophically disruptive things that could have happened if the UK left the EU without a plan in place before Brexit could still occur if the two sides reach the end of the transition period without agreements.

That’s because once the transition period expires, all the trade and regulatory arrangements the UK was following will end. The two sides will trade under World Trade Organization rules, which sets the tariffs and quotas between countries that don’t have free-trade agreements in place with each other.

Checks and controls could create massive gridlock at ports of entry, which could lead to food and medicine shortages. A few thorny issues have been (mostly) settled, including Northern Ireland’s border with Ireland. But, in general, a 2020 no-deal could still look a lot like the one experts predicted before Brexit became official.

For all these reasons, this is an outcome both the UK and the EU want to avoid. Like last time, it will be bad for both the EU and the UK, but far worse for the UK.

This is why Johnson’s critics deemed his decision to eliminate the possibility of extending the transition “reckless and irresponsible.” But Johnson has continued to insist he can make speedy deals with the EU — and the rest of the world. Now he and everybody else are about to find out.

New poll finds most voters believe Trump will win reelection — even many who don’t want him to
Vox Sentences: A Band-Aid for a 35-day wound
The most important book I’ve read this year
How Biden has — and hasn’t — harnessed the national reckoning on race
How the Save the Rainforest movement gave rise to modern environmentalism
The crushing disappointment of Rey’s parentage