“Brooch warfare,” explained: what Queen Elizabeth’s jewels might be saying about Trump 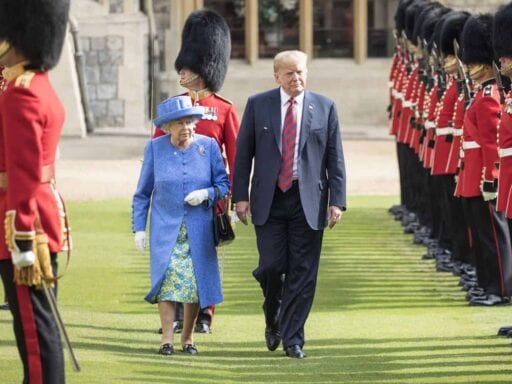 In a world where fashion increasingly doubles as a form of political statement or protest and the first lady’s jacket choice is a partisan tinderbox, it’s no surprise that a possible new example of fashion-based progressive idealism is making headlines.

What is surprising is the source: Queen Elizabeth’s jewelry. A viral twitter thread is suggesting her majesty may have been using her trademark brooches to send subtle messages repudiating the Trump administration and its policies during the president’s much-discussed visit to London last week.

The queen wore three brooches during Trump’s visit, and each of them — at least according to the online fandom with an appetite for Intense Brooch Politics — was an act of subtle nose-thumbing.

The inciting Twitter thread was published by Twitter user SamuraiKnitter, who is apparently the internet’s preeminent brooch decoder. A writer based in Pennsylvania, SamuraiKnitter described herself to Vox as a longtime history and fashion nerd who’s gifted with “an ability to put together jumbled facts into a coherent picture.” Her theories have caused the hashtags #BroochDecoderRing and #BroochWarfare to spread, and inspired Vice to label the affair “Broochgate.”

#BroochDecoderRing
The following data relies heavily on the work of the blogger at “Her Majesty’s Jewel Box”. If you swing by there (I will be linking), BE ADVISED THE BLOGGER WANTS NOTHING TO DO WITH THIS POLITICAL STUFF THAT IS NOT WHY SHE IS THERE so take it easy.

But what does it all mean? Is there a meaning behind the queen’s jewels? Was she really sipping subtle tea over Trump while having actual tea with him?

In a word: possibly. Let’s take a closer look.

Her majesty’s brooches are a ubiquitous fashion statement — they’ve been a prominent part of her wardrobe her whole life, and her fondness for them is so well-known that they’ve become a common gift presented to her by foreign dignitaries and other guests and friends. And on the internet, there’s a small but thriving band of jewel watchers and bloggers, broadcasting the #TiaraAlert and documenting royal jewels from around the globe, with an eye toward Queen Elizabeth’s in particular. One of these blogs, Order of Splendor, drew so much interest for its posts about the queen’s brooches that its author created a spinoff, the Queen’s Jewel Vault, just to chronicle the royal bling.

As that blogger has explained, “There are brooches representing countries, organizations, and regiments as well as brooches given as gifts and brooches inherited with great historical and sentimental significance.”

And these jewels are frequently interpreted to carry significant meanings beyond “here’s a shiny thing on my lapel.” For instance, there’s the huge True Lover’s Knot brooch, which the queen wore at two royal weddings — the 1960 wedding of her sister Princess Margaret, and the 2011 wedding of her grandson Prince William.

Additionally, there are multiple brooches that have been given as gifts to Queen Elizabeth or her predecessors by various countries, and which she has subsequently worn — you guessed it — while attending state functions hosted by those countries. Thus, it has become generally accepted among jewel watchers that the queen frequently uses her jewels to indicate loyalty and friendship between the UK and other nations.

Hence the great attention being paid to the brooches she wore during Trump’s visit.

Brooch warfare: some people believe the queen sent a personal message of loyalty and friendship to the Obamas and, uh, may have been in mourning for America

Queen Elizabeth wore three brooches during Trump’s visit. She donned the first one on the day of his arrival, at the height of the publicity surrounding his appearance as well as the height of the controversy.

The brooch in question is colloquially known as the “American state visit brooch.” That’s not an official name — it was made up by the author of the Queen’s Jewel Vault blog (which SamuraiKnitter cites many times throughout her Twitter thread). The media seems to have run with it anyway, perhaps because up until now, very few people outside these royal fashion fans were keeping a close eye on what jewels the queen wore.

The so-called “American state visit brooch” is an antique gift, made in the US in the 1950s in and given to the queen by the Obamas during an official state visit to the UK in 2011.

Small and relatively unassuming, the flower made of gold, diamonds, and agate attracted little attention at first. But when sharp-eyed observers realized the queen was wearing a gift from Trump’s most prominent political enemy, tongues started wagging.

The US has given QE jewelry before over the years and I bet her dresser could put hands on any and all of it given five minutes. But she chose the most SENTIMENTAL piece in the collection, the one that was given OUT OF FRIENDSHIP WITH THE OBAMAS AS PEOPLE.

Next up: day two of Trump’s visit, during which he sat down with England’s prime minister at a state banquet that was notably not hosted at Buckingham Palace and was unattended by Queen Elizabeth, in contrast to her treatment of the Obamas. Throughout the day, Elizabeth wore a gift presented to her by the governor general of Canada in 2017.

It’s the Sapphire Jubilee Snowflake Brooch, and it was given to commemorate her 65 years on the throne. But to SamuraiKnitter, Queen Elizabeth’s choice to wear it during Trump’s visit was an in-your-face demonstration of loyalty to a country Trump has had serious issues with of late:

It’s called the Sapphire Jubillee Brooch, and it was given to the Queen of England as a gift for ruling for eleventy billion (okay, 65). From Canada. You know, who Trump’s been screaming about and insulting. The commonwealth country and one of the UK’s greatest allies. Them.

If all that sounds pretty baller, it arguably gets better.

For the last occasion — the awkward moment when the ruler of the British Commonwealth stood around waiting for nearly 15 minutes to meet Trump — the queen wore an un-ostentatious diamond teardrop brooch.

The brooch was a gift passed down to her by her mother, who wore it during the 1952 state funeral for her husband, King George VI (Queen Elizabeth’s father). It appears prominently in the famous “Three Queens” photo from the occasion.

Jewel watchers nearly died, because it is the brooch worn in the famous “Three Queens in Mourning” photo, worn by the Queen Mum: pic.twitter.com/3xS2C56Xcj

Of course, it’s impossible to know for certain that the queen intended to send the message that dining with Trump was the social equivalent of attending her father’s funeral — or, just to toss out another metaphorical possibility, that Trump’s presidency represents the symbolic death of the American experiment.

But either way, Trump detractors seem to be delighted by the idea of Queen Elizabeth supporting the #resistance with bosom gemstones.

If “brooch warfare” becomes a common term, this whole thing will be worth it. https://t.co/wYWLgNE4sj

“The irony to all this,” SamuraiKnitter told Vox, “is I don’t actually pay that much attention to brooches. I like the tiaras.”

And even though jewel watchers can only speculate over the queen’s intended brooch symbolism during Trump’s visit, the popularity of the discussion has made it overwhelmingly clear that there is a growing audience for those seeking confirmation of their political opinions in even the most unexpected places.

We look forward to discovering what sort of coded shade her majesty might be tossing the next time she breaks out the Burmese Ruby.

Game of Thrones’ final season told flattering lies about wanting power
The 2019 Women’s March battled controversy. These women turned out anyway.
Trump and the Ukrainian president met today. Here’s what you missed.
The politics of “dude food”
The Michigan primary results raised a striking question about sexism
Things can get “really bad, really quickly” when a 24-year-old runs a company