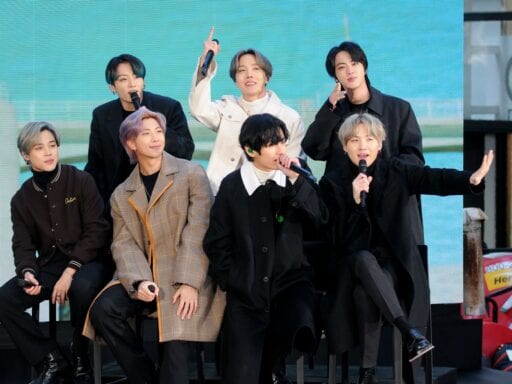 BTS’s new single “On” is its most successful song yet. That signifies change for the music industry.

You might have heard, the unstoppable K-pop group BTS released a new album recently, and it’s a pretty significant one. Map of the Soul: 7 offers much to say about the band and its international success, as well as the obstacles to mainstream acceptance in the US — obstacles BTS is steadily eroding.

Sporting a new single, “On,” another version of “On” featuring Sia, and new music largely written by each of the band members, Map of the Soul: 7 debuted at No. 1 in terms of global cumulative sales, capturing a slew of other notable firsts in the process. “On” topped Billboard’s Digital Sales chart and became the song with the best debut performance since Taylor Swift’s “Me!” last year, which featured Panic! At the Disco’s Brendon Urie.

And while it didn’t debut at No. 1 on the Billboard Hot 100 chart, “On” captured an unprecedented position, coming in at No. 4, the highest chart position ever for a Korean group. (Solo artist Psy’s 2012 smash “Gangnam Style” is the only Korean act to slot in higher, at No. 2.) This huge milestone signifies how dramatically the music industry landscape has shifted away from radio play and toward nontraditional methods of promotion and distribution. And it is indie and international artists who end up most benefiting from that change.

BTS’s enormous international fandom has only grown since the group’s 2012 debut. Plus, the band recently took a break from performing for several months, making this album a major comeback (in K-pop terms) and pushing anticipation for its release even higher.

In its first week of release, Map of the Soul: 7 sold over 411,000 album-equivalent units in the US alone. (By comparison, perennial chart-topper Eminem’s recent surprise album sold 279,000 units in its first week. The only recent album to outsell BTS in its first week was Harry Styles’s Fine Line, which sold 478,000 units in December.) In “pure sales,” which means without counting streams and downloads, it’s already the bestselling and fastest-selling album of 2020, with over 3 million copies sold globally in just three days. The album topped the Billboard Top 200 and Rolling Stone Top 200 charts. It also had the best debut week of any album released so far in 2020 and outsold all of the other albums in the top five combined.

Even before the album dropped, BTS started off 2020 by setting chart longevity records with its sleeper hit single from last year, “Make It Right.” By February, eleven of the band’s many releases had spent a jaw-dropping three years straight on the Billboard Top 200 list. Then came news of the February 21 release date for Map of the Soul: 7, which immediately broke presale records.

The album’s enormous success also gave it plenty of room to nab a bunch of other chart milestones as well. It’s important to list them all because the list puts the sheer magnitude of BTS’s success in perspective, not only globally but also compared to other US-based pop bands:

What makes many of these milestones even more impressive is that record labels often sell merchandise bundles — a physical CD, say, combined with additional swag — to encourage the sale of physical album copies, which can help an album rank higher on the charts. But BTS didn’t bundle Map of the Soul: 7 with any additional merchandise, meaning the album’s sales were primarily organic.

BTS, A SOUTH KOREAN BOYBAND GOT 411K UNITS WITH NO BUNDLING, NO PLAYLISTING, NO RADIO PLAY, MFS DIDNT EVEN TWEET ABOUT THEIR ALBUM ONCE ON THEIR ACC…..THE MUSIC INDUSTRY IS SHAKING FR pic.twitter.com/DnjHUi5YtG

With all of these notable successes, you might be wondering what possible difference one chart more or less might possibly make.

But in the case of the Billboard Hot 100, the answer is: quite a lot.

The Billboard Hot 100 measures the popularity of individual songs, not albums. BTS has charted on the Hot 100 before; before this week their songs had appeared eight times, most notably in 2019 when “Boy With Luv,” which featured the popular American artist Halsey, debuted at No. 8 on the list. But debuting a song at the top of the Hot 100 was a goal the group has had for a while, explicitly because it involves a level of mainstream saturation that spells US success at its highest level, and because the band wants to attain that level without compromising its identity.

“A Hot 100 and a Grammy nomination, these are our goals,” the band’s de facto leader, rapper Kim Namjoon a.k.a. RM, told Entertainment Weekly last year. “But they’re just goals — we don’t want to change our identity or our genuineness to get the No. 1. Like if we sing suddenly in full English and change all these other things, then that’s not BTS.”

Still, he added, “We’ll do everything, we’ll try” — and with “On,” the band and its studio BigHit clearly went all-out. Upon the song’s initial release, the online download price of the single and each of the other tracks off Map of the Soul: 7 was discounted to just 69 cents as an incentive for fans to purchase them individually.

In addition to the remix featuring Sia, BTS also released a total of three videos for “On.” The first, a “Kinetic Manifesto Film,” featured the band dancing the full song alongside dozens of backup drummers, dancers, and a brass marching band; since its February 21 debut, it’s already garnered 110 million views on YouTube. Then came a proper official music video (65 million views on YouTube since February 27) and a dance practice video showcasing the choreography. This was all pretty standard practice for a K-pop group, though the scale was much larger than usual.

Less standard: The band took over Grand Central Station in the album’s first week of release to perform “On” for a special episode of The Tonight Show Starring Jimmy Fallon that followed the band around New York City. Then BTS traveled to Los Angeles for a round of Carpool Karaoke with James Corden, where they sang “On” along with a mix of US hits and their own songs.

This mix of promotional stops emphasized the band members’ cultural fluidity, senses of humor, and talent, with the clear goal of making them seem relatable and familiar to US audiences. But would this marketing ploy be effective?

The Billboard Hot 100 relies on radio play. That makes it a different kind of milestone for an international band to achieve.

On one level, yes. Clearly, interest in BTS was high, and album sales were enormous. But in the early days of the single’s release, an early viral report suggested that album sales didn’t seem to be translating to either radio play or individual track sales for “On,” which the report suggested was abysmally low. This news sent fans into a panic; many were begging each other, particularly US fans, to buy the single in order to push the band’s potential position higher on the Hot 100 list. It’s unclear whether that initial source was inaccurate or whether the extra push among fans was wildly effective, but by late last week, the reported sales estimates for “On” were much, much higher:

Typically, sales of over 100,000 units would easily put “On” within range of the No. 1 spot on the Hot 100. But the Billboard chart is finicky, as it gives the most weight to streams of songs (with streams on paid tiers like Spotify Premium weighted ahead of streams on ad-supported platforms like YouTube), followed by radio air time and digital sales.

So even if a song has performed well enough to hit the No. 1 spot in terms of overall streams and digital sales without a significant amount of radio play, it likely doesn’t stand a chance of charting on the Hot 100. BTS fans, having been burned by the band’s lack of US radio play in the past, were all too aware of this, and they didn’t seem to believe things would be different this time around.

I’d like just once for a radio station to publicly admit they won’t play BTS because it’s not in English. Just admit your xenophobia and let’s stop pretending it has ANYTHING to do with BH or programming BTS is the biggest group in the world with the worst radio play.

Fans’ complaints that xenophobia is behind the lack of radio play seem to have merit. In 2018, a Chattanooga, Tennessee, DJ wrote a list of reasons why stations might not give BTS airplay. At the top: The group doesn’t sing in English. (Though the majority of its singles include at least some lyrics in English, BTS, like most K-pop groups, sings primarily in Korean.) Other potential contributing factors included their unwillingness to relocate to America and do extensive get-to-know-you interviews and participate in events sponsored by US radio stations.

So fans were in deep suspense leading up to Monday’s announcement of where the band would land on the chart. Some tracked radio plays across the national US market to chart the band’s progress, even as US radio stations seemed to pay little attention to the band.

Just as an FYI, this is where we are with US radio play as of yesterday. Please send love to the stations playing ON!!

The song will hopefully be picked up by more stations this week – in the meantime, please stream & buy the album & ON as much as you can!! @BTS_twt pic.twitter.com/JWHKJCDK74

All of this culminated in Monday’s news that BTS had landed in the Hot 100’s Top 5.

ON IS #4 ON THE HOT100 WITHOUT ANY FCKIN RADIO PLAY OR PLAYLISTING BTS ARE CHANGING THE FCKIN GAMR pic.twitter.com/JHzIkvzRxa

It’s hard to overstate what an achievement it is for any band to land this high on the Hot 100 with as little radio play as BTS seems to have gotten. For comparison, when “Boy With Luv” charted last year, it had promotion from Halsey and ample radio play, and it still only managed to squeeze in at No. 8 on the list. An international band, singing mainly in a language other than English or Spanish, landing this high on the chart without the influence of mainstream radio suggests a powerful cultural change. More people are finding their way to the band independently, and traditional industry promotional methods are becoming less effective than ever.

A number of factors all serve to aid bands that otherwise would have been unable to break through the wall of industry gatekeeping and the power of individual radio stations to determine what gets played. The proliferation of music streaming platforms, the rise of SoundCloud culture as a way of promoting talent, and highly self-organized fanbases acting as taste arbiters and music promoters — all of these factors can work in the favor of international and unknown artists. (It’s worth noting that BTS’s original public debut way back in 2012 featured the band releasing a few tracks on SoundCloud.) Shifts away from label-friendly artists toward artists curated by crowdsourcing allow otherwise unsuitable artists to break through when the industry itself would ordinarily keep them at bay.

It’s hard to think of a band with BTS’s level of success as an underdog, but in terms of breaking into the US mainstream, it has been — until now. And while No. 4 is still a long way from No. 1, BTS’s story so far has been about a perpetual ascension higher through the charts and into the eye of the public. Don’t be surprised if Map of the Soul: 7 continues to make chart-topping cultural inroads.

After all, this was just the first week.

The House just passed a bill that would give millions of workers the right to sue their boss
In Dave Chappelle’s surprise new special, he drops the comedy to meditate on black America
Top UN human rights official rebukes Trump’s press attacks as “close to incitement of violence”
Code [email protected]
Donald Trump is not delusional
Most US clinical skin care is designed for white women. This CEO is making products for everyone.