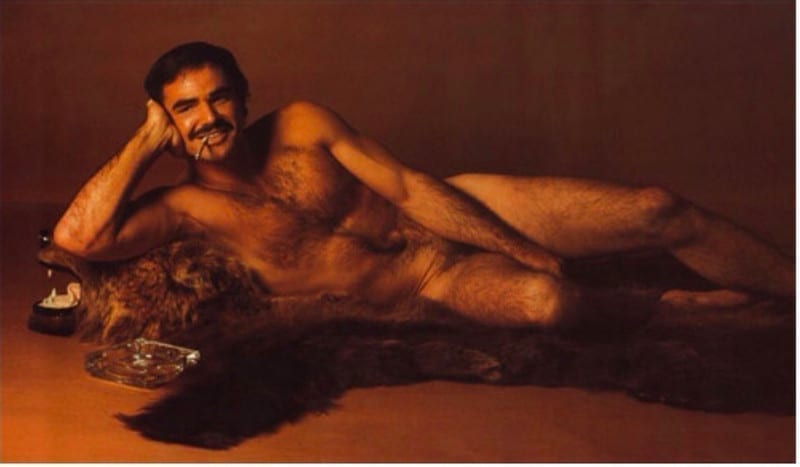 The actor, known for a wide range of films — including Deliverance, Smokey and the Bandit, and Boogie Nights — had experienced a string of health issues in recent years, including a bypass operation in 2010 and a stay in rehab in 2009.

As an actor working during the turbulent psychosexual introspection of ‘70s-era Hollywood, Reynolds embodied the image of the red-blooded American male. He legendarily shot to superstardom when he posed nude — lying on a bearskin rug, no less — for a history-making centerfold in Cosmopolitan in 1972.

In doing so, Reynolds became the first male celebrity to blatantly market the power of his own sex appeal — and it paid off. He spent most of the 1970s reigning as one of the biggest stars in Hollywood — including a five-year period between 1978 and 1982 when he was the highest-grossing actor in the business.

Reynolds was born in Michigan in 1936, but he moved to Florida as a boy and would continue to reside in the state throughout his life. He was a college football star, playing halfback on a scholarship to Florida State University until an injury kept him off the field. After his FSU career ended, Reynolds attended a junior college, where a sharp-eyed English teacher cast him as the lead role in his first play. The role earned Reynolds the Florida State Drama Award in 1956, at the age of 20.

The prize included an internship at a summer stock theater in New York, and from there Reynolds’s career began to take off. By 1961 he’d made his Broadway debut (though it was a flop) as well as his film debut, and in 1962 he nabbed his first attention-getting TV role, as Quint Asper on Gunsmoke.

After three seasons of Gunsmoke, Reynolds took a number of lead television roles. But it wasn’t until 1972 that his career exploded — thanks to his centerfold turn in Cosmo, which sold a staggering 1.5 million copies, and his co-starring role in the classic John Boorman thriller Deliverance alongside Jon Voight. Reynolds would later say the film was the best of his career.

Reynolds was known for frequently doing his own stunts, and for cultivating a friendship with Hollywood stunt legend Hal Needham. The two had a storied bromance epitomized by their 1977 collaboration on Smokey and the Bandit. The classic action comedy about trucking and boozing came in second only to Star Wars in terms of 1977’s year-end box office, and solidified Reynolds’s image as an affable-yet-roguish good ol’ boy, equal parts charm and rugged masculinity.

Wry, self-deprecating, and charming, Reynolds was a true Hollywood idol

Outside of his acting roles, Reynolds was known as a frequent talk-show guest and entertainer, full of anecdotes about his own life and Hollywood. In fact, it was his stint as a guest host on The Tonight Show, standing in for Johnny Carson, that first introduced Cosmopolitan editor Helen Gurley Brown to Reynolds, and led to the idea of the centerfold. “He was handsome, humorous, wonderful body, frisky,” she would later recall.

Though Reynolds eventually admitted that he regretted doing the centerfold because he believed it hurt Deliverance’s chances for critical success, it’s become one of the most famous emblems of modern male sexuality, widely seen as a breakthrough moment for acknowledging and catering to the female gaze. And it’s been parodied countless times in pop culture since.

Reynolds was married twice; both of his wives accused him of domestic violence

Reynolds didn’t reserve his sex appeal only for the camera; he romanced a string of Hollywood celebrities, including Dinah Shore, Tammy Wynette, and Bandit co-star Sally Field. He was married to British actress Judy Carne in the ’60s, then to actress Loni Anderson in the ’90s.

Both actresses said that Reynolds was violently abusive to them. Carne, who died in 2015, said in a 1985 autobiography that Reynolds physically assaulted her during their marriage. After Anderson’s divorce from Reynolds in 1993, she said in a San Francisco Chronicle profile that Reynolds beat her “a dozen or so times.”

Describing the final incident before their divorce, Anderson said, ”Burt shoved me all around the room, then threw me to the floor and opened the drawer and got out a loaded gun. He handed me the gun and told me to shoot myself and do us all a favor. I was terrified.” She also said Reynolds told her no one would believe her allegations because he was “Mr. Wonderful”; Reynolds brushed off the accusations from both women, and cultural assessment of his career has effectively buried them.

Above all, Reynolds’s machismo was the stuff of celluloid legend

Though his career waned in the 1980s and ’90s, Reynolds continued to work constantly, racking up, by some reports, hundreds of film and television roles. The most famous of these was of course Boogie Nights, a movie he famously hated making, but which brought him much sought-after critical acclaim — and a reputation that only grew in succeeding years.

Throughout the latter half of his life, he maintained a penchant for wry, self-deprecating humor, as evidenced by many of the remembrances left on social media following news of his passing:

Burt Reynolds & Clint Eastwood were fired from GUNSMOKE & RAWHIDE at the same time. Burt was told he couldn’t act and Clint his neck was too skinny. In the parking lot, Burt said to Clint, “I dunno what you’re gonna do, but I’m gonna take acting lessons.” #RIPBurtReynolds

Above all, Reynolds’s entire persona was that of a laidback, confident, manly man, complete with swagger, a touch of false humility, and a flair for living wild. And though his catalog of work might best be summed up by his contribution to the soundtrack for Smokey and the Bandit 2 — “Let’s Do Something Cheap and Superficial” — his legacy was one of polished machismo.

I once spent a very memorable day with Burt Reynolds at his home in Hollywood. He could be charming and surly, but man, did that guy live like a goddamned movie star. https://t.co/2omJs4vKVK

As Reynolds himself put it in the conclusion of his 2015 autobiography, But Enough About Me. “I know I’m old, but I feel young. And that’s one thing they can never take away. Nobody had more fun than I did.”

Here’s the real reason Trump canceled Pompeo’s North Korea trip
Why one small-business owner shut down her shop for a month
Inside the DOJ’s struggle with Trump’s demand for a “Spygate” investigation
Wilbur Ross’s prediction about the coronavirus helping the US economy could not have been more wrong
A guide to the Trump administration’s biggest scandals, accomplishments, and policies
Millions of people will see a sharp drop in their unemployment benefits because Congress failed to a...