Buttigieg MSNBC town hall: “I would not have applied that amount of pressure” on Franken to resign 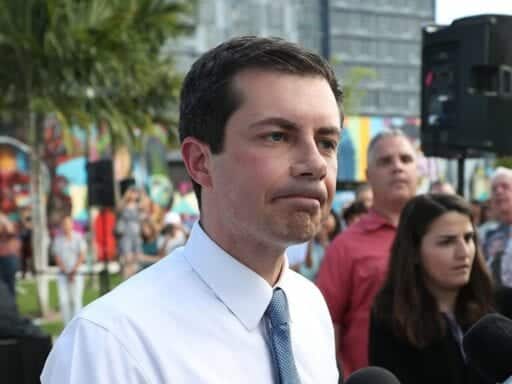 The implicit criticism of Kirsten Gillibrand and other Senate women went against Buttigieg’s deft answers to other gender questions.

And so the biggest moment of his MSNBC town hall Monday night in Fresno, CA was his half-hearted defense of former Sen. Al Franken (D-MN), who resigned in 2017 after several women accused him of groping them.

Calls for Franken’s resignation were led by Democratic women in the Senate — most notably Kirsten Gillibrand (D-NY), who is now herself running for president.

Buttigieg didn’t name Gillibrand or other Democratic senators running for president who called for Franken’s resignation in the days before he offered it — including Sens. Kamala Harris (D-CA), Elizabeth Warren (D-MA), and Cory Booker (D-NJ). But when he was asked by host Chris Matthews if he would have “pushed (Franken) out” had he been in the Senate, Buttigieg replied that “I would not have applied that amount of pressure at that time before we knew more.”

It couldn’t help but be seen in contrast to — and implicit criticism of — Buttigieg’s rivals in the Senate, especially Gillibrand.

MSNBC’s Chris Matthews asks Democrat Pete Buttigieg if he thinks former Sen. Al Franken (D-MN) should have been forced to leave the Senate for his past sexual misconduct that was exposed during the #MeToo movement

Buttigieg: “I would not have applied that pressure at that time” pic.twitter.com/Hei7mgsx4i

The Franken resignation has already taken up a surprising amount of oxygen in the Democratic primary. It has been offered as an explanation for Gillibrand’s slow start as a candidate; reportedly, some donors in the party are reluctant to back her because they blame her for Franken’s departure.

The continued bitterness over the 2017 departure belies a bigger split in the party: between people who feel strongly that Democrats need to hold themselves to progressive standards and those who fear that Democrats will weaken themselves politically if they’re too apologetic or woke.

Buttigieg kind of put himself in the category of wokeness skeptics by saying he wouldn’t have put that kind of pressure on Franken that quickly. But he was hardly enthusiastic about it.

When first asked by Matthews about Franken, Buttigieg initially stressed it was Franken’s decision to resign, and pointed out that the Democrats “hold ourselves to a higher standard” than Republicans have in censuring men accused of harassment.

But Matthews — who for much of the town hall was almost embarrassingly deferential and flattering to Buttigieg — pressed on, insisting that Franken had been pushed out by Senate Minority Leader Chuck Schumer (D-NY) and others, and forcing Buttigieg to weigh in on the pressure effort.

CHRIS MATTHEWS: Al Franken, should he have been pushed to resign from the U.S. Senate by the Democratic caucus, his fellow caucus members?

PETE BUTTIGIEG: I think it was his decision to make, but it think the way we basically held him to a higher standard than the GOP does their people has been used against us.

CHRIS MATTHEWS: Do you think he should have been pushed to leave?

PETE BUTTIGIEG: Again, it was his decision. I think that —

CHRIS MATTHEWS: But I’m not asking you about his decision. Should the other members of the Democratic caucus in the Senate — starting at the top, Chuck Schumer down, and the other people who pushed him to get out — they put a lot of pressure on him to leave, were they right or wrong?

PETE BUTTIGIEG: Well, it’s not a bad thing that we hold ourselves to a higher standard.

CHRIS MATTHEWS: Were they right to do that, to push him out of the Senate, because they did?

PETE BUTTIGIEG: I would not have applied that amount of pressure at that time before we knew more.

Buttigieg’s initial reticence to answer isn’t that surprising. During other moments in the town hall, he evinced a keen awareness that he, as a white man in a primary crowded with them, has to demonstrate that he’s worthy to be the face of a party that’s much more diverse than Republicans are, and increasingly anxious about whether its elites reflect that diversity.

When one questioner asked him directly why women should vote for him instead of competitors like Elizabeth Warren and Kamala Harris who are “frankly more experienced than you,” Buttigieg told the audience that he believed “we should have a woman in the Oval Office right now” — Hillary Clinton.

He closed out his answer with the level of professed humility that would make him more appealing to Democratic women uneasy about supporting a man for president: “Now, the other thing that I want the women of America to know, because I’ve met a lot of women who say, ‘I like you, I like your message, I think you got an appealing candidacy, but I just will not vote for a man this time,’ is that I get it, and whether you decide to be for me or not, I promise that I will be for you.”

His response to a question about impeaching President Trump showed a similar instinct. When a town-hall attendee professed frustration with House Speaker Nancy Pelosi (D-CA)’s caution in starting impeachment proceedings, Buttigieg stated his own support for impeachment, but warned he “would think twice about offering strategic advice to Nancy Pelosi.” It was a deft way to take a stance on the issue, while refusing to criticize a beloved elder stateswoman in the party.

But those aren’t the moments that stood out. Instead, the moment that attracted notice on social media was the Franken exchange — the one in which he failed to signal a willingness to defer to the Democratic Party’s women leaders, and feinted toward a common criticism of the #MeToo movement in implying that the censure was the result of not knowing all the facts.

Pete Buttigieg’s agreeable personality — call him “Mayor Pete,” please — is supposed to be key to his appeal. But he can’t please everyone in the Democratic Party of 2019, because Democrats don’t agree about what their party should be — a unified team where being a Democrat is a politician’s most important feminist bona fide, or a progressive bastion in which, if anything, some male politicians could stand to take a back seat.

Joe Biden’s effort to heal the breach with Elizabeth Warren on bankruptcy, explained
The controversial 1994 crime law that Joe Biden helped write, explained
The 13 Democrats running for president and everything else you should know about 2020
America’s Next Top Model is 17 years old. And people are still mad at Tyra Banks.
What the Iraq disaster can teach us about Trump
Amazon may soon face an antitrust probe. Here are 3 questions the FTC is asking about it.