BuzzFeed journalists just walked off the job in 4 cities. Here’s why. 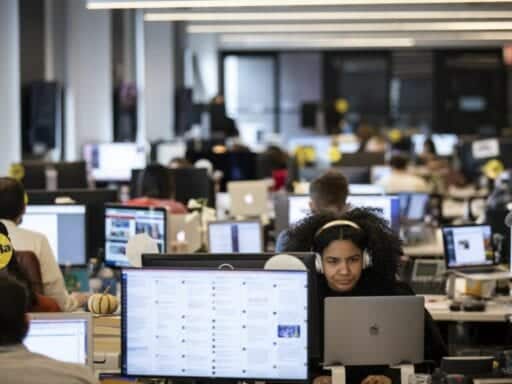 Employees are trying to organize one of the largest labor unions in digital media.

BuzzFeed News journalists are getting impatient. It’s been four months since they voted to form a labor union, but the company still hasn’t officially recognized them.

Dozens of frustrated employees walked off the job Monday afternoon to protest the company’s delay in recognizing BuzzFeed News Union. Journalists in New York, San Francisco, Washington, DC, and Los Angeles stopped working at 2 pm to get the company’s attention.

I’m joining my incredible BuzzFeed News colleagues walking out today to demand BuzzFeed comes back to the table to give us a fair voluntary recognition agreement ✊ #1u pic.twitter.com/Zuyf83mX99

Managers at the popular news website, which employs more than 200 journalists in the US, have been fighting with union representatives for months about how many employees can join the bargaining unit, according to a statement BuzzFeed News Union shared with Vox. The union, which is represented by the NewsGuild of New York, says management keeps trying to exclude workers they claim are managers or supervisors, even though no employees report to them.

BuzzFeed says that’s not true and that the union is holding up the process. In an email to employees, which was shared with Vox, BuzzFeed CEO Jonah Peretti said the union won’t accept a proposal to define which positions would be part of the bargaining unit before recognition, and won’t agree to honor individual contracts while they negotiate a collective bargaining contract.

“Despite what you may hear to the contrary, we continue to have ongoing, daily communication between our lawyers, and we are confident the proposal provides a strong basis on which to move forward with the collective bargaining process,” Peretti said in the email. The company’s offer would recognize 77 journalists in the bargaining unit — far fewer than the union wants.

The past few months have been “tense,” the union said in its statement, and employees are getting frustrated. No other digital media company, the statement says, has taken this long to recognize a labor union during the recent wave of labor organizing in the news industry. Another option would require employees to seek recognition through the National Labor Relations Board, a process that could take even longer.

Journalists at more than 30 digital new sites have unionized in the past two years to secure higher pay, benefits, and severance in a volatile industry that counted nearly 12,000 layoffs last year. And employees are more willing than ever to use aggressive tactics to get what they want. Earlier this month, more than 300 employees at Vox Media participated in a one-day work stoppage during the final stages of contract negotiations. (Disclosure: I am a member of Vox Media Union.)

BuzzFeed has been particularly resistant to union efforts in the past, with Peretti famously shutting down a conversation on the topic in 2015. BuzzFeed employees have since watched peers at other media outlets organize successfully, and Monday’s walkout shows that they are prepared to take aggressive action to get the company to the negotiating table.

The news industry is organizing faster than ever

The BuzzFeed walkout comes during a wave of union drives in the media industry. While newspaper journalists have a long tradition of unionizing, digital news startups built a culture that relied on a young, flexible, temporary workforce.

The thought that millennials would unionize newsrooms was once considered outlandish, especially as overall union membership has declined in US workplaces.

In a 2015, the Washington Post ran an article with the headline “Why Internet Journalists Don’t Unionize,” arguing that it has to do with a “generation of younger workers less familiar with unions who’ve built personal brands that they can transfer to other media companies … so writers are willing to put in long hours for low pay until they’re poached by some other place, which is the only way to get a raise, anyway.”

But they’re not so willing to do that anymore. Online journalists have grown weary of constant industry layoffs and unlivable salaries in expensive cities. The very public unionization process at Gawker in 2015 sparked a movement. Staffers at sites including Vice, ThinkProgress, HuffPost, Thrillist, Mic, and the Intercept soon unionized too.

“In total, the number of unionized workers in internet publishing has risen 20-fold since 2010,” according to a report in the Harvard Business Review. It’s an astonishing increase, and for the most part, companies quickly recognized their employees’ unions.

The benefits of unionization, which guarantees severance and annual pay raises, have only become more obvious during the series of layoffs in recent months. That’s what prompted BuzzFeed journalists to organize; they voted to unionize in February, right after the company laid off 40 journalists. But it’s more than that.

The company, on the other hand, appears not thrilled about the organizing efforts. In April, managers blew off a scheduled meeting with union representatives. Employees shamed them on social media, and so did New York City Mayor Bill de Blasio.

To the union: This city stands with you.
To the management: Come. To. The. Table.

Since then, both sides have been meeting and arguing about how big the unit will be. Meanwhile, employees are fed up, and they’re willing to disrupt business to get their point across. Since 2 pm on Monday, no fresh news stories were posted on BuzzFeed News.

Uber lost an eye-popping $5 billion in a single quarter
What we still haven’t learned from Gamergate
Pete Buttigieg wants reparations and citizenship for separated immigrant families
6 key takeaways from the Ukraine whistleblower complaint
A body double and a “rogue operation”: the latest in Jamal Khashoggi news
The Supreme Court’s drastic shift to the right, cartoonsplained