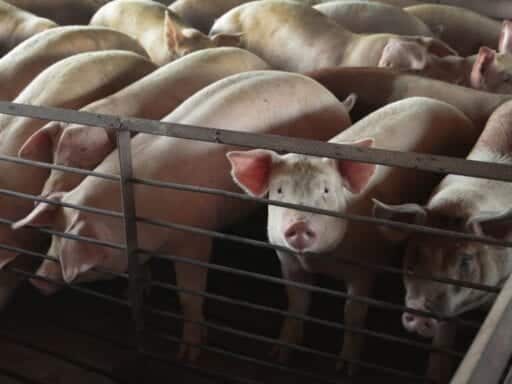 Animal welfare, stalled in the legislature, could make major progress at the ballot box.

This November, voters will get the chance to weigh in on some transformative new animal welfare laws at the state level. While these measures go well beyond any current requirements, they’re reasonably likely to pass. Voters tend to be more favorable toward animal welfare than legislators, and animal welfare laws have had some of their biggest successes at the ballot box.

Most Americans aren’t vegetarians or vegans, but that doesn’t mean they aren’t concerned with the welfare of animals. Nearly everyone consumes animals that are raised and killed on factory farms (over 99 percent of land animals raised for food are, so even “humane”-labeled food is typically factory-farmed). But even most meat-eating Americans are strongly opposed to the abuses that are commonplace in the industry. In a 2017 Ipsos/Sentience Institute poll, 49 percent of Americans supported a ban on factory farming, nearly 90 percent thought “farmed animals have roughly the same ability to feel pain and discomfort as humans,” and nearly 70 percent agreed that “the factory farming of animals is one of the most important social issues in the world today.”

Those sentiments might explain why new initiatives that protect animal welfare have had a striking success rate at the ballot box. Voters have banned gestation crates and battery cages in California and Massachusetts, limited puppy mills in Missouri, and restricted the sale of ivory and animal parts in Oregon and Washington.

Meanwhile, legislatures have tended to push the other way. Six state legislatures have banned undercover investigations of factory farms, Iowa passed a law requiring grocers to sell caged eggs, and the federal government is contemplating restrictions on clean meat (which is produced without slaughtering animals). H.R. 6720, which prohibits the sale and slaughter of dogs and cats for human consumption, is stalled. H.R. 4691, which closes a loophole that lets breeders with a revoked license keep breeding animals, is languishing in a committee. The last major federal bill targeting farm animal welfare was introduced in 2010, and it never passed.

So laws improving conditions for animals are likely to need a direct referendum to have much chance of success. There are a couple up for consideration this year. We talked with Sentient Media, the Open Philanthropy Project Farm Animal Welfare Newsletter, and the Humane Society of the United States about which ones to look out for.

Proposition 12 would establish new cage-free housing requirements for baby veal calves, mother pigs, and egg-laying hens. This isn’t the first time that issue has been in front of California voters. In 2008, voters approved Proposition 2, which required space for farm animals to “lie down, stand up, fully extend their limbs and turn around freely.” Industrial agriculture promptly settled on a very conservative interpretation of “freely,” and animals remained tightly confined. Proposition 12 leaves less room for interpretation, specifying the number of square feet needed for each animal.

Millions of animals are raised and slaughtered annually on factory farms in California. Even more animals would be affected, since the new requirements apply to any farmer who wants to sell animal products within California. As a result, the new requirements would have an impact across the country and could potentially affect tens of millions of animals. That said, PETA is opposed, objecting that the bill doesn’t allow hens enough space — only one square foot — and that it has a long phase-in period.

When I talked with Josh Balk at the Humane Society of the United States, he rejected that. “No city, state, province, or country in the world has mandated animal protections this strict,” Balk said. And California is not just any state, but an economic and agricultural powerhouse with a high population. “The world’s fifth-largest economy banning the sale of meat and eggs from caged animals is going to have a tremendous impact,” he told me. The Humane Society joins the ASPCA, the Center for Food Safety, the Sierra Club, and Earth Justice in endorsing the bill. The Association of California Egg Farmers and the National Pork Producers Council are opposed.

This would directly improve the welfare of about 40M layer hens, 700K pregnant sows, and 100K veal calves each year. It would force companies to start implementing the crate-free and cage-free promises they’ve made in recent years. And it would remind politicians that, when Americans get a choice, they vote to protect farm animals.

The Open Philanthropy Project has since recommended a $4 million grant to the Proposition 12 campaign.

In 40 US states, commercial dog racing is prohibited. Florida is one of the six that still have active dog-racing facilities, which often involve terrible conditions for the dogs. It’s been estimated that a dog dies on Florida’s racetracks every three days. Amendment 13 would end commercial dog races by the end of 2020.

The vast majority of animals in Florida are on factory farms, not dog-racing facilities, so the direct impact of this bill would be fairly small. Animal advocates, though, have often found that smaller reforms to an industry — for example, prohibiting dog fighting, horse slaughter for meat, and circuses — get people thinking about the overall cause and can lead to larger reforms later.

Opponents of the Florida bill were concerned about momentum toward general animal rights too, and appealed to the Florida Supreme Court to strike the proposition from the ballot, objecting that the statement in it — “the humane treatment of animals is a fundamental value of the people of the State of Florida” — might set an inappropriate precedent. In a 6-1 decision, the Florida Supreme Court concluded that voters can consider the bill.

The impact of campaigns like the Florida and California ballot initiatives is often larger than the immediate effects. Successful campaigns can directly advance the interests of animals. They also remind legislators that this is an issue of interest to voters. Sometimes — as occurred this year in an Ohio resolution banning puppy mills — opponents of reforms come to the table in advance of a statewide initiative in order to avoid losing a direct vote. Legislators may be much less interested in animal welfare than the public, but referendums mean they can’t get too far behind the times.