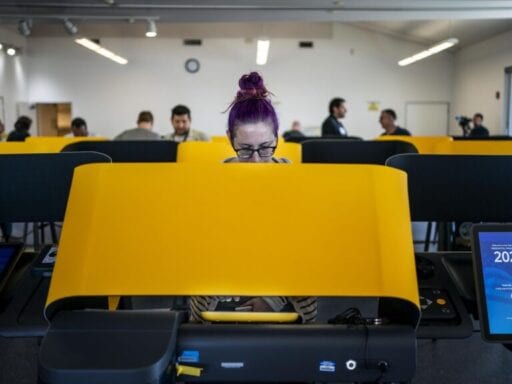 In response to Covid-19, California will allow everyone to vote by mail.

California has become the first state to commit to automatically mailing all registered voters a ballot for the November election, a significant move as states consider how to protect both voting rights and public health during the coronavirus pandemic.

California Gov. Gavin Newsom signed an executive order on Friday requiring election officials to send mail-in ballots to every registered voter ahead of the general election, acknowledging that attempting traditional voting on a mass scale will likely still be too dangerous come November.

“Elections and the right to vote are foundational to our democracy,” Newsom said in a statement. “No Californian should be forced to risk their health in order to exercise their right to vote.”

Most Californians already live in counties that have opted-in to send all voters a ballot under a 2016 law, but the edict temporarily expands the practice statewide. In-person voting will still be available at consolidated voting centers, which voting rights advocates say are crucial to serve people with disabilities, people experiencing homelessness, and people with limited English proficiency.

Newsom’s order comes amid rising concern from experts and election officials over the need to safely conduct the November presidential election — a need made even more urgent after disastrous primary elections in Wisconsin in April, during which social distancing was difficult and thousands of voters had to interact with high-touch surfaces. State officials believe up to 52 people may have become infected with the coronavirus at polling sites.

Fear that Covid-19 might spread during elections — and that concerns over the virus might depress voter turnout — have led to a national push to make voting more accessible, with some Democratic lawmakers offering proposals for nationwide voting by mail. Other national leaders have called on states to institute expanded vote-by-mail policies; former Secretary of State and past presidential candidate Hillary Clinton tweeted on Friday that other states should follow California’s lead.

But Republicans and the Trump administration have pushed back on expanding mail-in voting, arguing it poses a risk for voter fraud. Trump spokesperson Tim Murtaugh wrote on Twitter Friday that California’s order is a “thinly-veiled political tactic” put in place to “undermine election security.”

Researchers, however, have found that voter fraud is actually incredibly rare. And polls have found that despite negative messaging about voting by mail from the president and his allies, mail-in ballots are overwhelmingly popular: For instance, an April Reuters/Ipsos poll found that three-quarters of the American public, including most Republicans, support automatic mail-in ballots for the presidential election as the pandemic continues.

States are making it easier to vote by mail, as others call for a federal vote-by-mail system

Five states — Colorado, Hawaii, Oregon, Washington, and Utah — already mail out ballots to all registered voters for every election, and 34 other states provide access to mail-in ballots for anyone who wants one. As the coronavirus continues to pose a public health risk, other states are looking to follow their lead.

In addition to California, New York and Kentucky recently launched programs intended to improve access to mail-in ballots by sending absentee ballot applications to all voters. New York’s ballots include prepaid postage so voters can return their ballot for free, and Kentucky allows absentee ballot requests to be made online.

Ohio was the first state to cancel in-person voting, switching to a mail-in election for the 2020 primary, and counties in other states have made plans to send absentee ballot applications to all registered voters — including Palm Beach County in Florida, where Trump is registered to vote.

But as local election officials have sounded the alarm that there may not be enough time for every state to fully transition to mail-in voting — particularly given that some states do not have the funds to pay for such an endeavor — other voting rights advocates have pushed for the federal government to make national changes.

For instance, Sens. Ron Wyden (D-OR) and Amy Klobuchar (D-MN) introduced a bill that would expand early and mail-in voting, as well as require states to have contingency voting plans for emergencies. Wyden also introduced a bill early last year that would allow all eligible voters to vote by mail, though it has not moved through Congress.

The CARES Act, passed in late March, included $400 million to help states run elections during the pandemic, but some states have raised concerns that they may not be able to access the money because of restrictions, such as a requirement that states match 20 percent of any elections-related funding they receive. And the Brennan Center for Justice, a nonpartisan public policy institute at New York University Law School, estimated the funding would cover just a fraction of what’s needed to safely conduct elections this year.

To address these concerns, Speaker of the House Nancy Pelosi has called for up to $4 billion to be set aside for voting by mail as lawmakers put together a fourth coronavirus-related stimulus package. But as Trump and other leading Republicans decry efforts to expand voting access — citing voter fraud and, in one instance, baldly noting it would hurt Republicans’ electoral chances — that proposal may fail to become a reality.