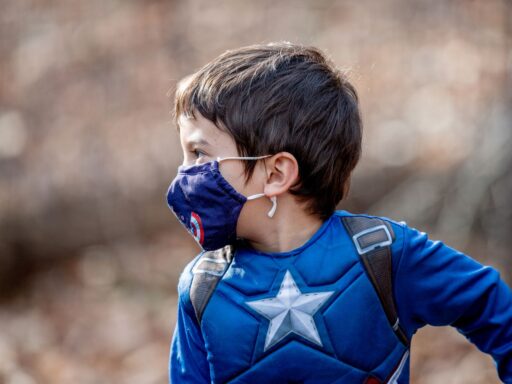 What America’s jolting start to a new year means for the Marvel superhero.

Like many of the people who are now fighting over him, Captain America has had a turbulent start to 2021. Amid the harrowing events of January 6, in which five people died during an invasion of the US Capitol by an angry mob of Trump supporters, different political factions have tossed Steve Rogers around like his own boomerang shield.

To the right, the character represents national pride, faithful military service, and American power. To the left, he’s a staunch protector of the people who fights fascism and white supremacy. Across the ideological spectrum, inflamed citizens are seeking solace and inspiration, and have held up the beloved superhero as a touchstone for their own values — and their very different views of what America should be.

The fluctuating role of Marvel’s fictional patriot in the ideological melee offers a microcosmic view of the deep ironies of America’s current, frustrating political situation. It also reveals the futility of trying to map fictional characters onto complex real-life situations — especially when they’re this unprecedented.

Captain America’s reputation has had a strange month

I’m going to tell my kids this is Captain America. pic.twitter.com/oAQG5KSMuF

To an extent, the comparison makes sense for Abrams, who has long been a vocal and avid fan of geek culture. To get out the vote and fundraise for the 2020 election, she partnered with geek icons like David Tennant of Doctor Who fame and the cast of Supernatural. And while she wasn’t solely responsible for eking out a majority for Democrats in both houses of Congress, Abrams and her high-profile voting rights campaign played a major role in raising voter awareness and turnout in her home state.

The association of Abrams with the Avengers continues a persistent Trump-era tradition of superheroes serving as iconography and inspiration for real-world protest movements against the administration. Abrams herself is keenly aware of the connection; she’s even referenced the Avengers when discussing her fight against voter disenfranchisement.

So far, this is all in keeping with Captain America’s image and legacy. Created during comics’ Golden Age, Cap was one of the earliest Marvel heroes — and one of the most explicitly anti-fascist. He fought against Hydra, a fictional Nazi equivalent, and once famously punched Hitler. So far, so good.

But even as depictions of Abrams as the ultimate Avenger made the rounds, an alternate reality was manifesting: As information about the conservative march on Washington spread, photos from the scene seemed to show insurgents in Captain America gear taking part in the mob.

We’ve got photos coming out of Trump supporters in Washington already, including this guy pic.twitter.com/C7abemXoVD

Granted, this protester has donned a strange mix of hybrid Mandalorian cosplay (“the Ayn Randalorian”) with Captain America’s shield. But this isn’t the first time Captain America (or the Pepe the Frog depicted on his shield) has shown up as a MAGA symbol. Trump supporters have long identified with Steve Rogers’s patriotism and have even explicitly depicted Trump as the superhero — as in this photo, below, taken during a November election protest.

And in the days leading up to Wednesday’s action, protesters created merchandise riffing off the Captain America-led Avengers film Civil War, converting the Marvel logo into “MAGA”:

They all knew. And these guys had shirts made in preparation. pic.twitter.com/31QTn4fFLT

In the film Civil War, Steve Rogers has a falling-out with Tony Stark (a.k.a. Iron Man) over Steve’s decision to stand by his ex-assassin best friend, Bucky Barnes, despite Barnes’s many acts of aggression against the Avengers and their parent government organization S.H.I.E.L.D. (Bucky also killed Tony’s parents, adding a personal twist here.) It’s not exactly a theme that’s easy to map onto the cause of Wednesday’s riot, which was motivated mainly by false conspiracy theories surrounding the US election, and the mob’s belief that Joe Biden’s victory was the result of a fraudulent vote count.

But Marvel has long courted the right wing, from films and comics with blatantly nationalistic or imperialistic themes to its dalliance with the military-industrial complex, to the hugely controversial comic book arc in which Captain America, longtime fighter of fascists, joined the fascist organization Hydra.

This paradox took a real-life turn on Wednesday. As the violence in the Capitol played out, Chris Evans, who plays Captain America in the Marvel Cinematic Universe, tweeted his dismay at what he was seeing.

So many people enabled this.

But then a Twitter user, Niktaylorde, made the searing — and viral — argument that Evans himself had done plenty to promote a “both sides” approach to the problem of white supremacy:

Niktaylorde shared photos of Evans meeting with members of the military during a USO tour; hanging out at his local police station; and meeting prominent political leaders as part of his bipartisan project A Starting Point, a “civic engagement” website he created in the (somewhat flawed) hope of dispensing with political echo chambers.

“If the downstream impact or the byproduct of this site is some sort of unity between the parties, great,” Evans told the Washington Post in October. During the Capitol Hill insurrection, however, Evans’s Twitter followers weren’t really feeling the urge to unite with Trumpists who’d violently broken into the Capitol, injured police, and sent members of Congress hiding under their desks.

This about-face suggests just how abruptly the public had to confront the reality of extremism and the physical, non-theoretical aspects of democracy, as we watched rioters looting congressional offices and raiding the House in garish costumes and makeshift uniforms. The presentation of the costumed insurrectionists seemed to border on an inhabitation of fantasy — not so much cosplay as a real-life LARP (live-action roleplay) in which they were finally able to live out their dreams of becoming rebels and even martyrs for their cause.

Seeing a lot of nerd and video game tats from the insurrectionists cosplaying as heroes. Are we going to have a goddamn moment of self-awareness, yet?

But all of the violent fantasies manifested last week didn’t stop onlookers from mapping allegories of pop culture onto real life.

This looks like when Scar took over Pride Rock https://t.co/kjb0uqYJxP

Using allegories for real life is appealing, but it ignores the complexities of fact and fiction

It’s easy to see why this happens: These comparisons are often striking, memorable, and meaningful to fans of the fictional allegory under discussion. But as my colleague Emily VanDerWerff pointed out in a tweet thread about the Stacey Abrams and Captain America comparisons, this way of thinking flattens and misshapes both the fiction and the reality, and romanticizes the idea of becoming a fictional hero yourself. This isn’t a movie, but saying so doesn’t end the problem that social media valorizes easy comparisons and a lack of nuance.

As an example, take this 2016 election fan art by comics artist Stephen Byrne:

At the time, the image, which shows Trump being backed by a wide range of comic book villains and other fictional foes, seemed to be making the point that Trump himself was as villainous as each of the characters depicted standing behind him.

In the wake of the January 6 attack, the artwork went viral again.

The amount of people rationalizing that [insert villain] isn’t THAT bad at once misses the point but also kinda shows how evil Trump has become.

Adam Lance Garcia, who reposted the art after the riots, made the straightforward argument that Trump really is villainous, and so are his supporters. And geek culture’s valorization of villains and antiheroes from Darth Vader to Breaking Bad’s Walter White may be a small part of what drew so many geeks to Trump’s authoritarian lure to begin with.

The Byrne art seems to suggest all these villains — a quizzically random assemblage including characters like Skeletor, Hannibal Lecter, a Dalek, and Snow White’s Queen — would all support Trump despite being dramatically different characters. For example, as many people have pointed out, the art has Magneto, a Holocaust survivor, standing next to the Red Skull, a leader of Marvel’s Hydra and a literal Nazi.

Byrne called this criticism pedantic. It’s not. We shouldn’t flatten every kind of villainy into a kind of broad evil that’s easy to dismiss. Similarly, the flattening of Captain America into a generic version of himself makes him co-optable across the political spectrum, until he begins to lose meaning as a symbol. And the rationale that Trump is as bad as [insert every fictional villain ever] has the effect of implying that everyone who likes any of these characters is indirectly supporting Trump.

This is the kind of argument that starts to feel as piecemeal as that Captain Ayn Randalorian cosplay — it’s a reasoning that holds up only until your favorite superhero becomes a Nazi. But an upsetting plot twist is still fiction, and fiction above all else is a creative departure from the real world, not a carbon copy of it.

I realize the MCU is practically our only shared reference point, but the ways in which people flatten real, complicated figures and movements into comic book characters exemplify both what’s wrong with political discourse AND what’s wrong with superhero movies.

Trying to use a creative landscape to sort out our real-life ideological disputes will only diminish our ability to accept how complicated both fiction and reality can be. But the tendency of humans to compare real-world events to fiction isn’t going to go away anytime soon. So given this basic fact, perhaps the best way to keep Captain America from falling into the wrong hands is to fight fictional fire with fire.

And so America’s hero lives to fight — and be misunderstood — another day.