Can Democrats pull off another Senate win in Arizona? 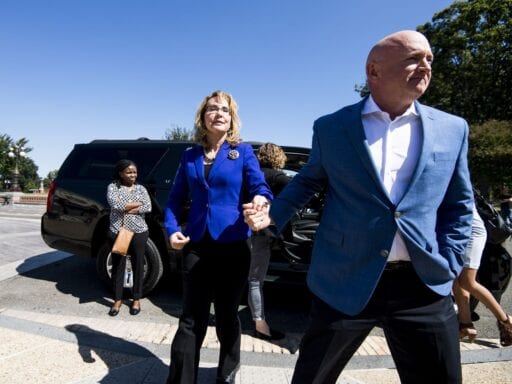 The same voters who helped Kyrsten Sinema win could boost Mark Kelly, too.

The Senate race in Arizona is giving a lot of people déjà vu.

Just two years after running — and narrowly losing — to Sen. Kyrsten Sinema, Sen. Martha McSally is running again, this time against retired astronaut Mark Kelly, in an attempt to keep her seat. In a unique twist, McSally was appointed to an open Senate seat by Gov. Doug Ducey to serve out the term of the late Sen. John McCain after she’d previously lost. And experts say McSally’s candidacy isn’t the only thing that feels familiar.

“I would be willing to wager Sinema just handed Kelly her playbook and said, ‘Here you go, here’s how you win the US Senate in Arizona,’” quipped OH Predictive Insights pollster Mike Noble.

Many of the dynamics that defined 2018 — and contributed to the state’s shift to the left — have only become more apparent in the two years since.

Independent voters, which make up about a third of the state’s electorate, are still dissatisfied with President Donald Trump and likely to favor Democrats this fall. In a recent ABC News/Washington Post poll, Democratic presidential nominee Joe Biden led Trump 57 percent to 38 percent among independent voters in the state. Democrats are also making inroads with moderate Republicans, particularly suburban women, who are interested in less polarized leadership and concerned about Trump’s handling of the coronavirus. And the state’s growing population of Latinx voters is continuing to skew Democratic.

“The shift is these Ducey-Sinema voters. You’re a Republican and you’re willing to vote for a Democrat. That’s where I think the most growth has been,” said Lorna Romero, a former communications director for McCain’s 2016 campaign.

There are some key differences this cycle that are poised to have major implications on the race, too. The state, like the rest of the country, is still grappling with the public health and economic consequences of a devastating pandemic, which hit Arizona particularly hard this past summer. Plus, the presidential election is poised to loom over any down-ballot races.

Strong anti-Trump sentiment in the state, driven by his divisive rhetoric and poor handling of the pandemic, could ultimately amplify the same trends already evident in the last two cycles. Although Sen. Mitt Romney won Arizona by 9 points in the 2012 presidential race, Trump only took it by 3 in 2016. Sinema then won the state’s Senate seat by 2 points in 2018.

Following her defeat that year, members of McSally’s team put out a memo that touched on the reasons behind her loss. In it, they summed up several issues — including her decision to align herself closely with the president — that could well lead to the same outcome again.

“A significant segment of the AZ GOP was hostile to the President,” the memo read. “This segment of moderate Republicans, especially [women], proved very difficult to bring home to a Republican candidate that supported President Trump and the confirmation of Justice Kavanaugh.” In addition to maintaining her steadfast backing for Trump, McSally is poised to take another potentially polarizing Supreme Court vote in the coming weeks, making some of the circumstances she’s dealing with very similar to 2018.

Democrats are making gains with moderate Republicans in Arizona

According to exit polling from the midterms, Sinema won 12 percent of Republicans as well as 50 percent of independents and an overwhelming majority of Democrats. That same coalition of voters could be the ones to buoy Kelly to victory this cycle.

In the RealClearPolitics average, Kelly is ahead of McSally by more than 6 points. And an OH Predictive Insights poll published in mid-September found that 15 percent of Republicans and 55 percent of independents would support him.

“Sinema voters — they are the Jeff Flake Republicans, they are the John McCain Republicans who want civility,” says Derrik Rochwalik, a political consultant based in Phoenix who was previously chair of the Maricopa County Young Republicans.

Trump’s hardline stances on immigration and racist comments about Mexican immigrants are among the factors that have turned these voters away. And McSally’s willingness to back Trump on issues including the national emergency for his border wall and the recent Supreme Court vacancy means many view her as just another extension of his administration.

“I want a candidate that will represent my family and that will make decisions based on personal convictions and not just follow the President from their party,” said Mark Tucker, a resident of Gilbert, Arizona, in a recent statement that included a hundred Republicans backing Kelly.

While McSally has made a more partisan appeal, experts in the state note Kelly’s messaging has been designed — much like Sinema’s — to reach a specific subset of crossover Republicans and independents.

“When you look at his ads, he’s not talking about Democrat-this or Democrat-that. He’s running largely as somewhat of an independent,” says Joe Garcia, the executive director of the Chicanos Por La Causa Action Fund. McSally herself nodded at Kelly’s approach in an August event, going so far as to suggest that some people may not be aware he is a Democrat. “Somebody actually could vote Trump-Kelly,” she warned.

Kelly’s policy positions, like his messaging, hew to the center: He’s supportive of a public option and reducing drug prices through Medicare negotiation, and he has called out the need to generate more clean energy jobs while stopping short of backing the Green New Deal. Much like many Democrats did in 2018, he’s made defending protections for people with preexisting conditions a centerpiece of his campaign.

Kelly is also married to former Arizona Rep. Gabby Giffords, and the two have been leading gun-control advocates in the wake of the 2011 shooting during which a gunman shot Giffords in the head at a constituents’ meeting in Tucson. Presently, he backs universal background checks and red-flag laws, which enable law enforcement to bar individuals from accessing firearms if they are flagged as a danger to themselves or others.

“I’m running — to be an independent voice for Arizona,” Kelly has said. Kelly’s campaign declined to make him available to Vox for an interview. McSally’s campaign did not immediately respond to a request for comment.

Kelly’s focus on his independent streak echoes messaging Sinema once used about being able to work with “literally anyone” to get policy done, and it’s one that has played well with Arizona voters, who often boast about how independent they are.

McSally, meanwhile, has continued to link herself to Trump in a bet that this connection will be enough to rally members of the GOP’s conservative base in November, even as she’s lost moderates. She’s focused some on her biography as the first woman to fly in a combat mission for the Air Force, but much of her messaging has been dedicated to emphasizing her conservative bona fides.

Latinx voters are poised to have huge influence over the election, which could bode well for Democrats

A big factor in Arizona’s leftward shift is the uptick in Latinx voters in the state.

In 2018, Latinx voters overwhelmingly favored Democrats, with 70 percent supporting Sinema while 30 percent backed McSally. And since the last presidential election, Latinx voter share in the electorate has grown from 19.6 percent to 24.6 percent, with thousands of younger voters reaching voting age. According to Garcia, more than 100,000 new Latinx voters have turned 18 in recent years — and Latinx voters are younger, on average, than white voters in the state.

It’s important to note that Latinx voters are not a monolith; the majority who live in Arizona are Mexican American and more likely to be left-leaning. According to the ABC News/Washington Post survey this week, a higher proportion of Latinx voters in Arizona favored Biden than in Florida, for example, a trend that’s indicative of the diversity among members of the group.

The pandemic is ultimately an issue at the forefront for all Arizonans, including Latinx voters, who have been disproportionately impacted by it. “For the most part, Covid-19 and the cost of health care are overwhelmingly top issues,” says Edward Vargas, a researcher for polling firm Latino Decisions. “What we’ve seen in our polling is that they trust Democrats much more in addressing issues toward Covid-19.”

Both campaigns have focused more of their efforts on reaching Latinx voters — including participating in a virtual forum that will air in October — who historically haven’t seen as much formal outreach from candidates. In 2018, because of more dedicated organizing driven by advocacy groups including LUCHA and Mi Familia Vota, Latinx voter turnout saw a spike compared to 2014. Experts say they expect this same energy — if not more — in 2020.

“I think it’s going to be a record-setting election,” says Vargas.

Because of how she’s positioned herself, McSally’s fate is viewed as inextricably tied to Trump’s. “I do think that the strategy for the president — and Martha McSally — is making sure that the Trump supporters came out of the woodwork to support him in 2016, the play right now is to make sure that those people turn out,” says Romero.

McSally has also repeatedly emphasized that her seat is a bulwark against potential Democratic control of the Senate, an effort aimed at targeting those same Republicans, especially as the GOP seeks to confirm a Supreme Court nominee to take the late Justice Ruth Bader Ginsburg’s seat.

“Arizona is the tipping point for whether Chuck Schumer is going to be in charge in the Senate,” McSally said during an August appearance on CBS News. “A vote for Mark Kelly is a vote for … the radical left agenda.”

In the past week, the two candidates provided a glimpse of how they’d handle the Supreme Court nomination: McSally swiftly backed a vote on Trump’s Supreme Court pick, while Kelly argued that a nominee should be put forth by whoever wins the general election.

One of McSally’s chief arguments is, “Let’s make sure we don’t lose that second seat and that the Republicans don’t lose the Senate in 2020,” says Rochwalik, the Phoenix political consultant.

The pivotal role Arizona could play in determining control of the Senate has also meant that an overwhelming amount of funding has been flowing into this race, with Kelly, in particular, raising a staggering sum. According to the Center for Responsive Politics, Kelly had raked in more than $45 million as of a July report, dwarfing McSally, who had brought in $30 million as of a September report.

If Kelly can channel this support as effectively as Sinema did, he could see a repeat of her success, too.

The legacy of Katherine Johnson, NASA’s “Hidden Figures” mathematician
The Oscars’ new “popular film” category is a bad idea from a panicked organization
The best case for and against a fracking ban
Trump’s trainwreck ABC interview illustrated why he rarely strays from Fox News
Twitter’s stance on Infowars’ Alex Jones should be a moment of reckoning for users
Want to fix policing? Start with a better 911 system.