Can Joe Biden ride the Resistance to victory? 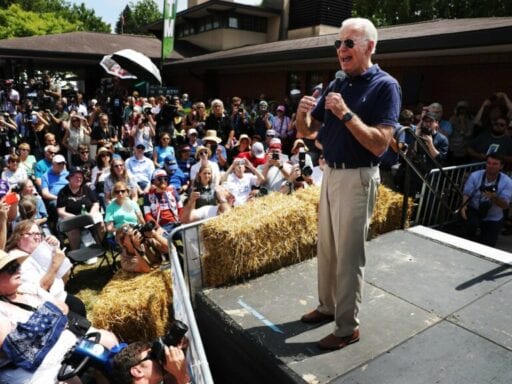 Iowa is full of older, white voters who are sick of Trump. The state could be Biden’s biggest asset — or his biggest vulnerability.

DES MOINES, Iowa — At a campaign stop in a well-kept barn, Vice President Joe Biden made a pitch last week to the type of crowd he must show he can deliver come caucus time next year: older white Americans.

He walked the crowd through the darkest moments of Donald Trump’s presidency, from Trump’s failure to denounce the violent rally in Charlottesville, Virginia, to his anti-immigrant rhetoric that seemingly emboldened the mass shooter in El Paso, Texas.

The crowd, many wearing “Resistance” apparel, liked what they heard.

“It’s terrifying to give it any thought — it makes me physically sick if we have to do another four years of [Trump]” Judy Hawk, a 73-year-old retired medical librarian from Burlington, Iowa, said, sitting with her sister who was wearing a “No human is illegal” shirt.

Biden has dominated every poll since the start of the Democratic primary, running to the right of the rest of the field and building the case that he can appeal to middle-of-the-road voters, particularly white voters whom Hillary Clinton lost in swing states in 2016.

Iowa is high-stakes for Biden. He’s made four swings through the state already, fewer than candidates like Bernie Sanders and Elizabeth Warren. If he can pull off a victory here, he’ll prove he has what it takes to reach his core demographic. (Iowa’s voters are extremely white — 90 percent — and skew older; more than 75 percent of registered voters over 50 voted in 2018.) If he can’t, out of the gate he risks losing the “electability” ethos Democrats are hungry for as they decide whom to put up against Trump.

Biden is a folksy, older white man who served as the vice president to the very popular Barack Obama (who rode his own victory in Iowa to the White House in 2008). On paper, at least, he has a good shot in Iowa.

He’s telling voters here that he’s got the best shot at beating Trump. “I started off and I continue to be — and I’m not counting on it — way ahead in the polls,” Biden said at a campaign stop in Des Moines. “You see that target on my back? I get it.”

Certainly, some voters agree already. “I’m a supporter because I think [Biden] will win,” said Janine Walsh, a 74-year-old voter, from Burlington, who wore a pink hat with “Resist!” bedazzled on the front to the barn event.

But despite his early lead in the polls, Iowa can be unpredictable. Candidates have shown that it’s possible to come from behind and win on a wave of enthusiasm. Obama looked like he was losing until he captured Iowa in 2008; Sen. Bernie Sanders unexpectedly came within a point of Hillary Clinton in 2016.

Iowa voters, even at Biden’s campaign events, are quick to tell you they are undecided. Voters are still “shopping.” But ask them to tick off their list and Biden’s name often comes up, and for the same reasons: He’s done this before, and they think he could win.

“I think he’s got the most experience, executive experience; he represents a more moderate stance in response to Trump,” said Tom Mittman, a retired emergency room physician from Iowa City. “But I would vote for any of the candidates. I like Biden’s views, I’m just a little concerned about his age. He’s more of a realist, and I like that.”

Biden isn’t interested in a “political revolution” like Sanders, or in making “structural change” like Warren. And when a reporter at the state fair asked Biden whether he would follow other Democrats in calling Trump a white supremacist, he simply said: “I’m not everybody else. I’m Joe Biden.”

Iowa voters know the state’s weight in the presidential election process. They’re first. And every major-party nominee since 1980 except Bill Clinton won either the Iowa caucus, the New Hampshire primary, or both.

That’s what raises the stakes for Biden. His entire candidacy rests on the idea that he can win. But what if he loses Iowa?

“With Joe Biden and Bernie Sanders I think they are out here and working their base and everything, but [the question is] are they going to win those people? Because there are so many different choices,” said Penelope Rosfjord of Sioux City, who is the Iowa Democratic Party’s Fourth District chair.

That was no more apparent than at the annual Wing Ding Dinner in Clear Lake, Iowa, where more than 20 Democrats got the chance to speak to a packed room of Democratic voters munching on baked beans and chicken nuggets.

Carol Rork, a 79-year-old from Britt, Iowa, said she came out of the dinner feeling like her list of candidates she could support had only grown longer. She was wearing stickers for Pete Buttigieg, Amy Klobuchar, and Warren. As for the enthusiasm around Biden, “not so much,” she said. “I think it’s more out of respect. And probably the older people.”

“He certainly didn’t wow the crowd,” Dawn Bassett, a 72-year-old retired school librarian from Kanawha, Iowa, said after the event.

Biden will have to prove that he can hold on as the safe bet — the man who can oust Trump.

“I would rather see someone like Warren,” Walsh said. “But I don’t think she can prevail … I think Biden can beat him.”

An overwhelming 72 percent of Iowa Democrats said they’d rather have a nominee who would be strong against Trump even if they disagree with that candidate on most issues, according to the Monmouth poll from early August. Only 20 percent said they’d pick a candidate based on ideology even if they would have a hard time beating Trump.

“When I left [Bernie’s] rally, I thought, yeah, I could live in Bernie’s world,” Hawk, of Burlington, said. “He’s got plans and direction; it’s just that he might be alone in that. … That becoming a reality feels small.”

So she’s considering Biden instead. She added, “I don’t sense a great deal of enthusiasm [around Biden]; the enthusiasm is just the importance of getting Trump out.”

An overwhelming percentage of Democrats — 75 percent — are under the impression that Biden can beat Trump, according to a July CBS/YouGov poll, more so than other frontrunners like Warren and Sanders. That’s even though candidates like Sanders have repeatedly beaten Trump in head-to-head matchup polls.

“Biden’s got more experience,” Jon Hedges, a retired factory worker from Burlington, said. “Biden has the best chance of getting Trump out of the White House.”

But for others, that’s not enough. The state hinges on grassroots energy, retail politics, and the personal connections between voters and candidates, and many say they’ve been wooed by the likes of Warren, Buttigieg, Sanders, and Kamala Harris.

“I don’t think there is any sane human being who doesn’t want to get rid of Trump,” Lucy Giehl, a 57-year-old teacher from West Burlington, Iowa, said after a Biden campaign event. Still, she admitted, “I don’t see as much enthusiasm for Joe.”

Biden’s swing through Iowa was Biden-esque, in that it had some clear missteps; he has always been known for going off the cuff, and he frequently rambles and says things that get him into trouble (like when he waxed nostalgic about working with segregationist senators).

In Boone, Iowa, he told reporters that he met with the survivors of the Parkland mass shooting in his capacity as vice president, although the shooting happened in 2018. His campaign clarified Biden was thinking of Sandy Hook. He told a room of Latino and Asian voters in Des Moines that “poor kids” are “just as talented as white kids,” immediately correcting himself that he meant “wealthy kids” — another moment that went viral on social media.

And there, he was asked about his criminal justice record and his role in the 1994 crime bill, something Sen. Cory Booker attacked him over in the last debate. Vox’s German Lopez has reported that experts now see that bill, which Biden was instrumental in writing and passing, as one of the major contributors to mass incarceration in the 1990s. The Iowa Asian and Latino Coalition PAC endorsed Harris on Monday.

Iowans are aware of these moments.

“I don’t know if [Biden] can stay in the race because they’re picking on him so much in the debates,” said Marsha Gourley, a 73-year-old retired teacher from Urbandale, Iowa, who voted for Trump in 2016, and is strongly considering Biden. “I don’t know whether he will manage to stay in.”

Biden has led the polls in Iowa, but he isn’t the most favorable Democrat in the race — Warren is, according to the latest poll from Monmouth University. But for now, his gaffes haven’t broken his frontrunner status. There are voters who understand where he’s coming from.

“Biden he demonstrates an ability to work with people,” Hawk said. “He is empathetic toward people. He’s not judgmental. He’s maybe made missteps in the past, and it’s not to excuse the missteps, but he wasn’t alone in the missteps he was doing. It’s different than it was.”

Conversations with Democratic voters here are reminiscent of the “Dated Dean, Married Kerry” bumper sticker from 2004.

Caucusing is “like dating,” Eric Hanks, a 53-year-old chiropractor from West Burlington, told me. “There are those I might be in love with but those I maybe should marry.”

Hanks said that despite his “passion” being with candidates like Warren, Buttigieg, and Sanders, he’s “done with passion. I just want results.”

The Supreme Court turned away several cases seeking to rein in police violence
Don’t want to read privacy policies? This AI tool will do it for you.
Bernie Sanders’s new bet: a climate change message can win him the Iowa caucuses
Some cities are shutting down transit after curfew. It’s a problem for essential workers and protest...
Baked Alaska’s clout-chasing spiral into white supremacy is an empty internet morality tale
Recording the Company cast album was infamously hellish. This cult favorite doc captured it all.