Can Joe Biden win the nomination even if he loses Iowa and New Hampshire? 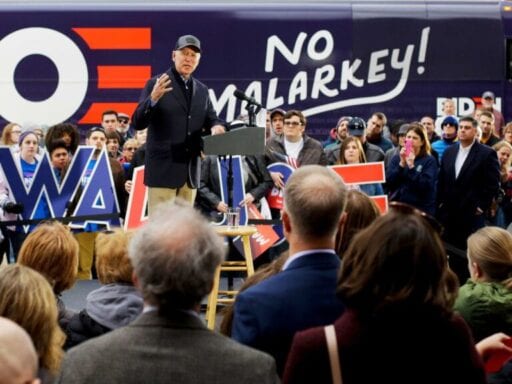 The competing theories of how to win in 2020 comes down to the momentum primary vs. the delegates primary.

Joe Biden’s 2020 campaign is confident it can do the improbable: win the Democratic nomination for president without winning Iowa and New Hampshire.

“We’ve long felt that one of our unique advantages is that we have multiple paths to the nomination, and I’m not sure anybody else can say that right now,” Biden’s deputy campaign manager Pete Kavanaugh told Vox.

The path rests on winning the Obama coalition of nonwhite voters; many older black voters in particular have so far signaled their loyalty to Biden. Though they’ve been campaigning and organizing in Iowa and New Hampshire, the former vice president’s campaign says faltering there wouldn’t be a death knell. Their paths hinge on strong showings in the more diverse early states of Nevada and South Carolina, and riding that energy into delegate-rich Super Tuesday on March 3. Pointing to the southern states of North Carolina, Florida, Georgia, and Virginia, Kavanaugh said, “Places like that we think we could have a really profound advantage.”

“We strongly believe — and have consistently said — that no single state is a must-win,” he added.

Political experts in the early states disagree, saying that taken together, Iowa and New Hampshire are indeed must-wins.

“No candidate in the modern primary cycle has won the nomination without coming in first or second in New Hampshire or Iowa,” said University of New Hampshire pollster and political science professor Andy Smith. “You’ve got to win in one of the early states because it’s all about momentum.”

Welcome to the competing theories of how to win in 2020: the momentum primary vs. the delegates primary.

The traditional path to the Democratic nomination — and the one that most top-tier candidates are pursuing, to varying degrees — starts in Iowa and New Hampshire. The importance of these first two states is not the amount of delegates each contains; it’s the Election Night headlines about who won, and who overperformed expectations.

Momentum is the reason why candidates are disproportionately spending more time in Iowa, New Hampshire, Nevada, and South Carolina than anywhere else in the country right now. The media narrative drives the early state primaries, and candidates who can win or change the narrative in these states are statistically much more likely to win the nomination.

Despite the 2020 primary campaign nationalizing, and despite plenty of grumbling from some presidential candidates that Iowa and New Hampshire are too old and white to continue playing such a big role in the nominating process, the states have had stubborn staying power.

“Iowa is the first place you can win something,” said veteran Iowa pollster Ann Selzer. “What voters from other states take from Iowa is here’s somebody who’s been vetted, and here’s where that state weighs in.”

Iowa in particular has been getting disproportionate attention from the top-tier Democratic candidate contingent of Biden, Sens. Elizabeth Warren (MA) and Bernie Sanders (VT), and South Bend, Indiana, Mayor Pete Buttigieg. Sanders is spending most of his time campaigning in Iowa, where he’s focusing heavily on combating climate change. Warren has been crisscrossing the country, but has also been spending a ton of time in the early states.

And Buttigieg, the fresh-faced candidate who is now leading the polls in both Iowa and New Hampshire but lagging in South Carolina, according to the most recent RealClearPolitics average, is depending on momentum to push him out of the gate, perhaps more than anyone else.

“For us it’s about harnessing the momentum and energy people feel around Pete and turning that into action,” a Buttigieg campaign aide told Vox.

Though Nevada and South Carolina don’t always take their cues from Iowa and New Hampshire, they are certainly watching the first two states to see what happens.

“My feeling is what happens in Iowa and New Hampshire is going to have a great impact on Nevada,” said Jon Ralston, editor of the Nevada Independent and the dean of the state’s political press corps, adding that poor showings in the first two states could hurt Biden in Nevada. “As important as I think we are, we are dependent on Iowa and New Hampshire. Because of the way the national media covers it, because momentum is important.”

Even though Biden still has a 20-point lead in South Carolina, where he’s a known and beloved entity among older black voters in particular, some in that state cautioned Biden’s support there could still be movable, especially if he slumps in the first two states.

“I think the Biden people are fooling themselves if they don’t believe they need to do well in Iowa and New Hampshire,” state Sen. Marlon Kimpson (D), who hasn’t yet endorsed a candidate, told Vox. “At the end of the day, it’s not going to be determinative of how we vote, but it will probably stymie the enthusiasm a bit for him to come limping out of New Hampshire and Iowa. It is an issue.”

The early states cull the field to its most serious contenders. What comes after is the race to bag delegates, and while it may not be as headline-grabbing at every turn, it’s hugely consequential.

It takes 1,990 delegates to win the Democratic party’s nomination for president, and about 40 percent of those delegates will be allotted on Super Tuesday. Not only is it about winning states, it’s also about winning district-level delegates. These are the voters and local activists who sign up through their state party to act as delegates. Along with a group of party leaders and state and local elected officials known as PLEO delegates, they make up the majority of the total 5,098 delegate and alternate votes that are up for grabs. (After the contentious 2016 nomination, the DNC changed its rules around automatic delegates or “superdelegates” this year. Superdelegates may now only vote on the first ballot to select a nominee at the Democratic National Convention if a campaign has secured a supermajority of pledged delegates. Otherwise, they weigh in in the unlikely event of a second round of voting.)

Democratic candidates are going to need at least a 15 percent threshold in states or individual districts in order to qualify for pledged delegates. Delegate math becomes crucial, and campaigns crunching the number will target certain districts with demographics that could be favorable for them.

Even as they’ve been crisscrossing the first four states, multiple top-tier campaigns have also been mapping out their Super Tuesday strategies for months. The most delegate-rich state of California has been added to the March 3 roster, along with Texas, North Carolina, and Minnesota. The delegates primary kicks off in earnest on Super Tuesday, and that is where Biden’s team believes they have the real edge, because of the former vice president’s steady support among older black voters in southern states.

Not only that, but there’s the fact that moderate House candidates swept Democrats to victory in the 2018 midterms, which the Biden campaign also sees as a potential opportunity.

“These states, it’s not just about the diversity, it’s also about the ideological makeup,” said Kavanaugh. “That’s why we feel we can play in all these districts, not just the diverse districts.”

A lot is riding on Super Tuesday — not just for Biden

If Biden pulls off losing Iowa and New Hampshire but winning Nevada and South Carolina, he and the rest of the field have just a few days before the primary takes a dramatic turn toward the “tarmac campaign” starting on March 3.

Given the lack of a clear frontrunner, some Democrats say they’re envisioning a scenario where there could be three to four candidates still in the race by the time Super Tuesday rolls around.

Once February is over and the early state contests end, the style of campaigning shifts abruptly from intimate town halls to large scale rallies and television and digital ads plastered on screens. Rather than convincing a relatively small number of voters in the early states, the remaining candidates need to woo a huge number of voters in large and diverse states like California and Texas — among 14 others.

Suddenly, delegate math is the name of the game. California alone is “fucking huge,” as one presidential campaign aide but it — a behemoth with over 500 delegates up for grabs.

“It’s a virtual national primary because there are so many states. The math itself changes, and every network has some sort of chart showing the projected delegate count,” said longtime California Democratic consultant Bill Carrick.

Campaigns have been preparing for this moment, some more than others. Buttigieg’s campaign has paid staff on the ground in California, but is so far relying on regional organizing staff and a volunteer base in most states after the first four. Both the Sanders and Warren campaigns have had organizers on the ground in key primary states for months, both in Super Tuesday states and the ones beyond. Warren’s campaign has been staffing up in 16 states, including California, Texas, Florida, Michigan, Arizona, Ohio, and others. Sanders has hired state directors in Colorado, Minnesota, Texas, and a field director in Oklahoma. The Sanders campaign has knocked over 7,000 doors in Oklahoma alone.

“We know our success on March 3 will be critical to Sen. Sanders winning the Democratic nomination, which is why over the past six months our campaign has taken concrete steps to build out an unrivaled operation across the Super Tuesday states.”, Sanders campaign spokesman Joe Calvello told Vox.

While the Golden State is usually seen as primarily a fundraising destination, both Sanders and Warren have made repeated trips there, drawing substantial crowds. Warren has a thin lead in that state, but Sanders has gained momentum in recent polls.

Sanders has been putting a huge emphasis on California, hiring over 80 staffers and opening five offices in the state, and heavily focusing on organizing communities of color. A new LA Times/UC Berkeley Institute of Governmental Studies found Sanders narrowly leading Warren in California, with Biden and South Bend, Indiana, Mayor Pete Buttigieg in third and fourth.

“He ran a real campaign here [in 2016], Carrick said. “He believes strongly he can do well here. He’s going to be a player in these Orange Country districts.”

The fluidity of the top-tier can be seen in other Super Tuesday states as well, where polls show Biden currently leading in Texas and North Carolina, and Warren leading in her home state of Massachusetts (many other Super Tuesday states haven’t been polled). Beyond that, Biden currently leads polls for four key March 17 primary states: Ohio, Florida, Arizona, and Illinois.

Still, a lot could change between now and then, and candidates can’t get delegates without momentum. It’s a simple reason as Smith put it, “winners win, and losers lose.”

What does Alexandria Ocasio-Cortez’s win mean? There’s a debate.
Mick Mulvaney says Trump is actually prepared to let the government shut down again
Trump’s latest White House event put some of the nation’s most vulnerable people at risk
Omarosa Manigault Newman seeks to join pay discrimination suit against Trump
What are hot chocolate bombs and why are they suddenly everywhere?
Even Senate Republicans want the White House to share a whistleblower report on Trump