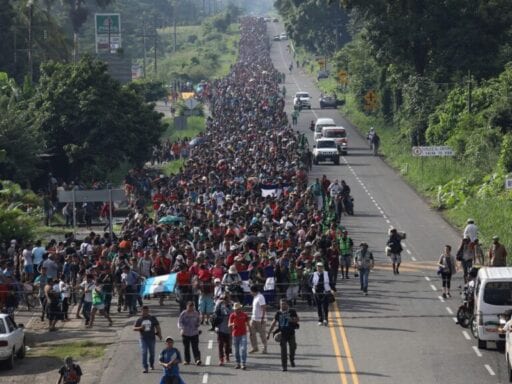 Not exactly, but it could get complicated.

President Trump says he plans to issue an executive order that will end birthright citizenship for children born in the United States.

He made the statement in a taped interview with Axios that will air in an upcoming HBO special, but it’s an idea that he has floated previously and that has garnered a lot of interest on the right for several years.

The basic argument you hear from many conservatives is that allowing the children of parents who have entered the country illegally to become citizens is a violation of US sovereignty and encourages people to abuse our immigration system. For obvious reasons, this notion is quite popular among anti-immigration activists — and by extension, many in Trump’s base.

As Vox’s Dara Lind notes, it’s unclear what the timetable for Trump’s executive order is or if such an order even exists. But let’s assume that it’s real and that Trump plans to sign it. What then? Can the president actually end birthright citizenship, a policy linked to the 14th Amendment of the Constitution? And if he can, what would that process look like?

To get some answers, I reached out to eleven legal experts. Their full responses, edited for clarity, are below.

The 14th Amendment was intended to make permanent the existing common-law rule of birthright citizenship and to extend birthright citizenship to persons of African descent and their descendants brought to the United States in slavery. The United States fought a civil war over this language, which was added to the Constitution in 1868 and explicitly overturned the prewar Supreme Court decision of Dred Scott v. Sandford.

That 1857 decision denied citizenship to Dred Scott, who was born in Virginia, enslaved, and who then sought his freedom through the courts. The Supreme Court denied him access to the courts by denying him US citizenship because he was of African descent.

The Dred Scott case and its glorification of racism and xenophobia is a reviled opinion and often used to demonstrate how far we have come as a nation devoted now to equal justice under the law. The president does not have the constitutional authority to change the 14th Amendment’s unmistakable meaning or purpose. But his words in the form of an impotent executive order may have the effect of inflaming a civil war, much like the Dred Scott decision did.

The 14th Amendment to the US Constitution guarantees citizenship to “all persons born or naturalized in the United States.” That cannot be changed without a constitutional amendment. Trump can try to issue an executive order, but under longstanding Supreme Court precedent, it would be invalid.

Perhaps he is banking on the Supreme Court to change its interpretation of the 14th Amendment to permit him to circumvent it via executive order, but that is unlikely given its clear language.

President Trump has repeatedly tried to style himself as a conservative who supports the strict constructionist or originalist view of constitutional interpretation. The hypocrisy of ignoring all principles of originalism and trying to rewrite the Constitution by executive order is stunning.

This issue was largely settled in 1898 in United States v. Wong Kim Ark. There, the Supreme Court held that “to hold that the Fourteenth Amendment of the Constitution excludes from citizenship the children, born in the United States, of citizens or subjects of other countries would be to deny citizenship to thousands of persons of English, Scotch, Irish, German, or other European parentage who have always been considered and treated as citizens of the United States.”

This is not how constitutional law works. You can’t amend the 14th Amendment by an executive order. When the 14th Amendment included the phrase “subject to the jurisdiction thereof,” the framers and the public clearly understood that they were setting aside the children of foreign diplomats.

Other visitors to the United States were and continue to be plainly under the jurisdiction of US law. Why else can they be detained and convicted in US courts for violating US law, unlike diplomats?

Only right-wing extremists have twisted this text and its original understanding to suggest otherwise. I am relieved to note that some conservative and originalist scholars today immediately joined in the rejection of Trump’s stunt.

This part of the 14th Amendment was written to specifically reverse the disastrous Dred Scott decision, which ruled that African Americans are not and could never be US citizens. This decision helped trigger the Civil War. The Republicans of the 1860s used jus soli (“law of the soil”) birthright citizenship to guarantee citizenship, regardless of how one was brought to the land.

Keep in mind the background context of the slave trade. And keep in mind the racist background, which in the 1860s Republicans were focused on overturning with a clear bright-line rule. Without a clear bright-line birthright rule, the rules are up for grabs — and back to racial politicization. It is a betrayal of that legacy that the Republicans 150 years later would be reversing this commitment in violation of the Constitution as part of a broader racially demonizing campaign.

Two points are clear. The president cannot change the Constitution by an executive order. That is not debatable. So the question is what does the 14th Amendment say?

The 14thAmendment is clear that someone born in the US is an American citizen, at least if the mother is here legally. There is some debate about whether that is true for a baby born to someone who is not legally here. Most people think the status of the mother is not relevant, but that is still debatable.

President Trump’s claim that he can eliminate birthright citizenship by executive order is flatly wrong. The Constitution declares that every person born in the US and “subject to the jurisdiction thereof” is a US citizen.

The Supreme Court in 1898, in United States v. Wong Kim Ark, held explicitly that the language “subject to the jurisdiction thereof” was meant to exclude (besides Native Americans born on tribal land) two groups and two groups only: children of foreign diplomats and children of enemy occupiers.

The Court based its interpretation on the three centuries of clear, unbroken British law from which the drafters of the US Constitution drew their understanding. Moreover, this is only common sense: Like anyone else, native-born Americans, whoever their parents are, can be charged with crimes if they disobey US law. How would this be possible if the US had no jurisdiction over them?

The president was also wrong to say that the United States is the only country that recognizes birthright citizenship. By my last count, there are approximately 30 countries with similar laws. They are particularly common in the Western Hemisphere, including Canada.

In taking this fringe position, President Trump has now gone beyond even his all-out war on immigrants. This latest attack extends his declaration of war to native-born US citizens. I expect that even the current Supreme Court will find this to be too great a stretch.

This would be an absurd effort by the president that would never withstand judicial scrutiny. Birthright citizenship is embedded in both clear Supreme Court interpretation of the text and original meaning of the 14th Amendment to the US Constitution and in federal statute.

The president could, presumably, attempt to adopt an innovative interpretation of those provisions and direct executive officers to follow that interpretation so as to exclude some class of individuals from the traditional understanding of the scope of American citizenship.

Such an order would be immediately challenged in court as contrary to both statute and Constitution, and I would expect the federal courts to emphatically reject the validity of such an executive order.

The Constitution wisely insulates US citizenship from the passing political winds. The 14th Amendment keeps things simple, with minor exceptions: A person born in this country is a citizen if they (unlike a foreign diplomat or an invading foreign enemy) must obey our laws.

Making citizenship subject to the passing wishes of the political branches would disrupt our democracy. Suppose Congress passed a law denying citizenship to children of undocumented immigrants. That would affect the ability of those persons to vote, work, and remain in the United States. But a second, more sympathetic Congress could change the rules back, a third could reinstate the restrictions, and so on. US citizenship could turn on each election.

The Supreme Court’s infamous 1857 Dred Scott decision had triggered this risk, which helped start the Civil War. The drafters of the 14th Amendment wrote their simple rule of birthright citizenship to stop these nightmare scenarios. President Trump’s pre-election political play should not obscure the 14th Amendment’s abiding wisdom.

The plain language of the 14th Amendment guarantees birthright citizenship, which was the common law rule before the Supreme Court’s infamous Dred Scott case. Its clear meaning is reflected in Congress’s debates leading to its proposal, and that meaning has been reaffirmed in Supreme Court decisions as well as 150 years of congressional interpretation.

The language cannot be amended except through the formal process of constitutional amendment laid out in Article V. If the president were to rely on an executive order reinterpreting birthright citizenship in order to withhold some government service or benefit for which any “citizen” is eligible, he would be acting unlawfully.

The evidence is succinctly summarized in a 2006 article by James C. Ho, whom President Trump appointed to the US Court of Appeals for the Fifth Circuit, “Defining ‘American’: Birthright Citizenship and the Original Understanding of the 14th Amendment.”

The 14th Amendment to the US Constitution begins: “All persons born or naturalized in the United States and subject to the jurisdiction thereof, are citizens of the United States and of the State wherein they reside.” This is no casual phrasing. Quite to the contrary, it emerged from the experience of the Civil War and the tragedies that preceded it.

The provision deliberately repudiates the prewar ruling in Dred Scott — a great stain on Supreme Court jurisprudence — that had denied citizenship to a US-born man on the grounds that he had been born into enslavement and was not part of our “political community.” Birthright citizenship has formed the cornerstone of American identity ever since the amendment took effect — for fully 150 years. It cannot be abolished by an executive order.

Assuming Mr. Trump did not largely or completely make up this story, the question is whether the White House Counsel took one position, then another, or whether someone elsewhere in the West Wing stepped in — perhaps Stephen Miller? — and the advice was ignored or changed under pressure. In either case, this is likely to be yet another sorry story about the rule of law in this administration.

The administration will not succeed with this move if the president proceeds as promised. Only by a tortured, hopelessly flawed and politically motivated theory can Trump assert a power inconsistent with the 14th amendment and controlling Supreme Court precedent. And the president’s evident move to bring this pledge into mid-term politics, only days before the election, hardly enhances his administration’s credibility before the courts.

How bookstores are weathering the pandemic
Isabel Wilkerson wants to change how we understand race in America
The New York Times is the latest news outlet to end its Spanish-language coverage
How we work out together now
States that Trump won easily in 2016 are looking tight for him in November
Trump just warned the shutdown could last for years. That’s pretty unlikely.