Cancer has a smell. Someday your phone may detect it. 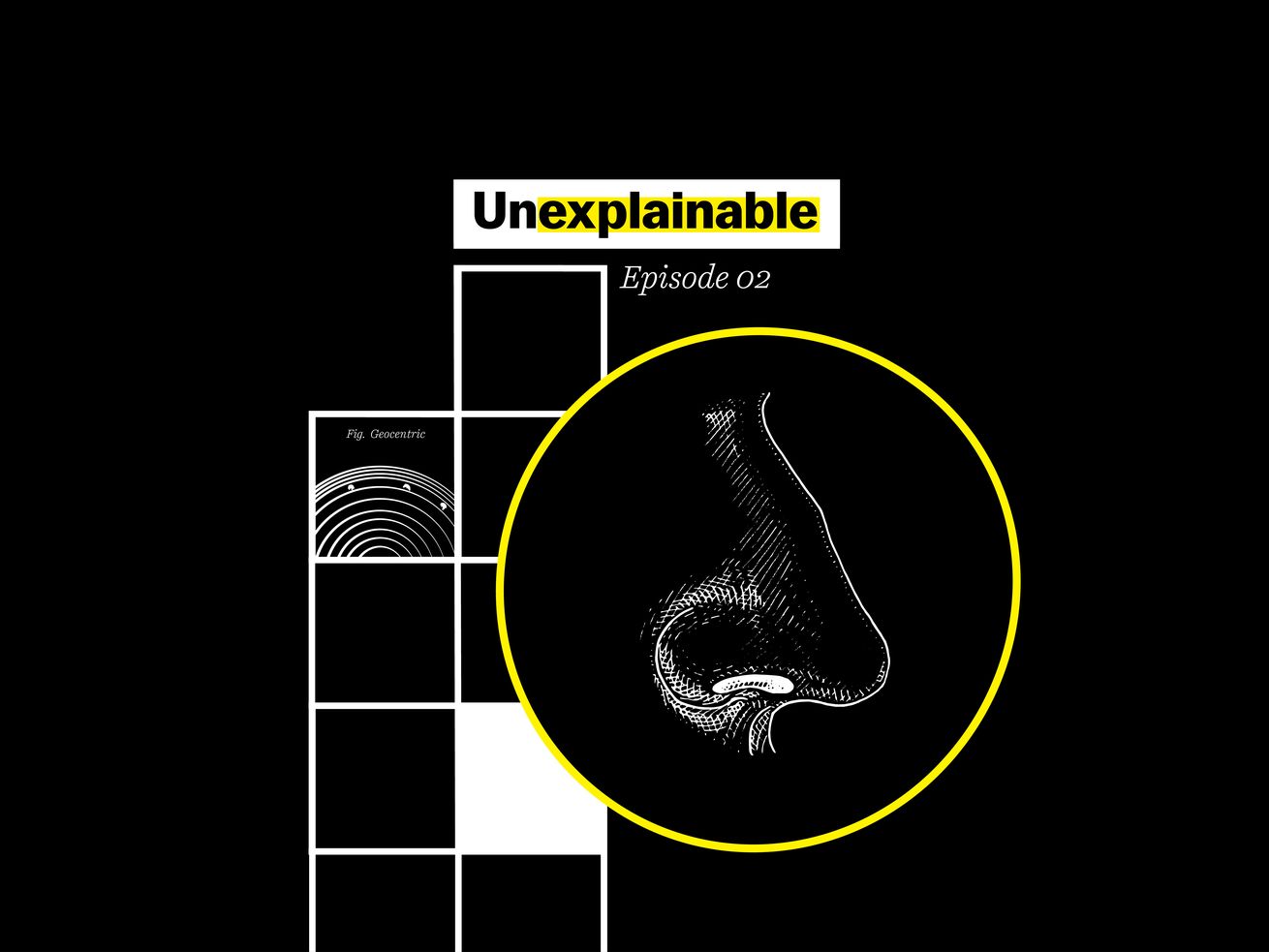 Our sense of smell is still a mystery. But that’s not stopping research on robot noses.

In our homes and in our pockets, there are electronics that can hear, see, and sense our touch. Your smartphone probably does all three. What’s missing: technology that can smell. But this may be changing, as detailed on the latest episode of Unexplainable, Vox’s new weekly podcast exploring unanswered questions in science.

The technology to make smartphones that smell is nearing reality, says Andreas Mershin, a research scientist and inventor at MIT. “I think we’re maybe five years away, maybe a little bit less,” he says, “to get it from where it is now to fully inside of a phone. And I’m talking [about deploying it] into a hundred million phones.”

The idea isn’t necessarily to have Siri tell you when you need a shower (though, that could be helpful for some people). There’s a bigger public-health mission: Replicate the incredible disease detection capabilities of dogs in a more portable, accessible form to help flag insidious illnesses early on.

Dogs can smell cancer, Parkinson’s, malaria, and other conditions that cause changes in human body odor. There’s even research underway on dogs’ ability to smell Covid-19.

Scientists could train more and more dogs to aid in disease detection, and deploy them around the world. But this kind of training is expensive, difficult, and time-consuming. Plus, not everyone likes dogs, and not everyone would appreciate being sniffed by a dog before a basketball game or during a doctor’s appointment.

Essentially, the hope is for scientists to engineer a robot nose to detect diseases the way a dog’s nose can.

“The idea has always been for the dog to translate what he knows with his nose to an electronic device,” says Claire Guest, a scientist who is researching Covid-19-sniffing dogs.

One of the things that’s so intriguing about robot noses is that researchers have been able to make headway on them despite not completely understanding how biological noses function. This is the central mystery of this week’s episode of Unexplainable: How can scientists build a robot nose if they don’t understand how smell works?

Listen above to hear how scientists are thinking through that mystery.

The challenge of robot noses, explained

Scientists know a lot of the basic mechanics of smell. They know that deep in our noses, there are special receptors that interact with the odor molecules we breathe in. And they know that those receptors send signals to the brain.

What they don’t know is why things smell the way they do. That is, why does one odor molecule smell one way, while another similarly shaped odor molecule smells different? That’s still a mystery. (With vision, for example, there are only a handful of receptor types, and the way they interact is well understood. With smell, there are 400 types, and we’ve only just begun to understand how they work together to detect a smell.)

Mershin first attempted to build a robot nose in 2007, when DARPA, the research and development agency for the US Defense Department, announced a challenge. It wanted to see if someone could build a robot nose that could detect certain molecules. DARPA didn’t make the exact list public, but based on the list, Mershin suspects the molecules had to do with smelling bombs, drugs, or dead bodies.

So how do you build a robot nose? Mershin, his collaborator at MIT, Shuguang Zhang, and their team first thought that they might build something that could directly detect the odor molecules themselves — something like a souped-up carbon monoxide detector. When any smelly molecule entered the detector, similar to when carbon monoxide gas enters a CO detector, an alarm would go off.

They used real smell receptors, which they grew in cells. And they spread the receptors out over a circuit board. (All sensory receptors exist to translate the outside world into electrical signals our brains can understand. In this case, the signals would transfer to circuitry instead.)

The hope was that the receptors would give a readout of all the odor molecules nearby. But then the team realized there were so many molecules it would need to detect, so many smells bouncing around, that the alarms would have gone off way too often. So the team decided not to build this machine.

For their next attempt, which they called the Nano-Nose, Mershin and Zhang tried something different.

Whereas their previous version was supposed to detect individual molecules, this one looked at the bigger picture: the overall smell. (A smell isn’t just a combination of molecules; it’s the particular way those molecules interact with a complicated series of receptors in your nose. It’s still a mystery how it all comes together. Check out our episode of Unexplainable for more.) The Nano-Nose recorded the frenzied pattern of electrical activity produced by the receptors in the presence of an odor. The readout looked something like a stock ticker. Each smell, Mershin found, produced a particular pattern that the computer (i.e., the brain) could recognize.

Ultimately, he showed that the Nano-Nose could detect smells using real receptors, and do so pretty sensitively. But the DARPA test was in an extremely controlled environment, which may be why DARPA discontinued the program after a few years. The real world is much more complicated.

Mershin is continuing his research, trying to prepare the Nano-Nose for everyday applications. And while earlier iterations were as big as a desktop, Mershin now says he’s shrunk the technology so that it could fit inside a smartphone.

Noses in our phones could help save lives

Mershin still needs to train the Nano-Nose more before it can actually smell diseases in everyday situations. In the real world, there are countless smells floating around, which is a very different situation from the clean, controlled environment of the DARPA test. To get past this hurdle, Mershin needs to expose the receptors to many more smells to improve its algorithm. But the basic proof of concept is here, and phones that smell may not be far off.

Granting phones a new way to monitor our behavior comes with some clear concerns. Would the data smelled by the phone be private? Could the robot nose be hacked or accessible to advertisers? These are questions we already ask about our phones’ ability to see and hear us, often with unsatisfying answers.

The privacy implications may be worrying, but the benefit seems clear: A pocket-sized robot nose could help save lives. “Any single one of us can have a mole that becomes malignant,” Mershin says. “If you wait six months, sometimes it becomes a death sentence.” But if your phone could notice a change of smell, it might alert you earlier.

Guest, the scientist training dogs to detect disease, says she understands this lifesaving potential personally. Years after she began her research, her dog Daisy started looking upset. She kept “staring at me and then nudging at me and staring at me and nudging at me,” she says. She felt where Daisy was nudging and found a lump. She was eventually diagnosed with breast cancer, and it’s quite possible that Daisy saved her life.

Not everyone has access to dogs like Guest’s. But nearly everyone has a smartphone. Right now, our phones can’t smell cancer. But one day, they might save a life.

Subscribe now to Unexplainable wherever you listen to podcasts, including Apple Podcasts, Spotify, and Google Podcasts.

The 7 most bizarre moments from Trump’s long-winded CPAC rant
WeWork is being sued for allegedly enabling sexual harassment
“Without it, we are flying in the dark”: Why the US needs better coronavirus testing, fast
Why do all these robots have cartoon eyes?
In Sharp Objects, secrets are the sharpest weapons of all
Biden could do a lot to fight factory farming even without Congress