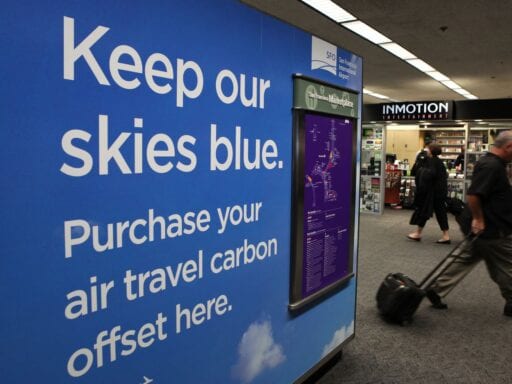 Share
Loading...
A kiosk at an airport offers travelers carbon offsets for their flights. Offsets are a popular and controversial tactic to fight against climate change. | Justin Sullivan/Getty Images

The controversial tactic to fight against climate change is becoming increasingly popular among companies, countries, and travelers.

Buying carbon offsets for greenhouse gas emissions has become a wildly popular way to fight against climate change. Massive corporations like Amazon and Delta Airlines, celebrities, individual travelers — even entire countries — have embraced offsets as an important tactic to limit their environmental impact.

The idea is simple: Someone else can withdraw what you deposit. More specifically, an emitter of a certain quantity of carbon dioxide can pay to compensate for it, leading to no net increase of heat-trapping gases. That compensation can come from planting trees that take in carbon dioxide as they grow, installing renewable energy that replaces fossil fuels, or destroying potent heat-trapping gases like nitrous oxide before they reach the atmosphere.

With an offset, you have an accounting mechanism that bridges greenhouse gas emitters with climate protectors. And offsets are now fueling a multibillion-dollar global market.

But to make a useful carbon offset, you have to consider four key factors. The first is additionality: Does buying this offset lead to a change that would not have happened otherwise? If not, then the offset isn’t leading to any new reductions in greenhouse gases. You can’t pay someone who is already installing a wind turbine and call it a day.

You also have to make sure that your offset is permanent and that the carbon it absorbs doesn’t leak back into the air. So if you’re planting forests, you have to protect them from fires and logging.

The offset also should not be double-counted; only one buyer can claim its value. Even if the offset mechanism — say a restored wetland — is in your country, it doesn’t count toward your climate goals if another country is paying for it.

Finally, the offset shouldn’t worsen any other environmental or social problems, what’s known as leakage. If you prevent an area of rainforest from being cut down, those loggers shouldn’t just move their operation to an unprotected area.

This all requires a lot of oversight and regulation. That’s why it’s tough to create offsets that lead to meaningful reductions in emissions. Analysts say there are more bad offsetting schemes than good ones. Some of the bigger programs — like the United Nations’ REDD+ program — have failed to deliver the amount of forest restoration that was promised.

There’s also a concern that offsets create a moral hazard — that they just allow polluters to go on polluting, greenwashing their public profiles instead of making the investments to reduce their own impacts on the climate.

However, offset advocates say that these problems are solvable. Good accounting, validation, and transparency can ensure that offsets yield proper results. Offsets can also speed up climate action, routing money around the world to the places where it would be most effective at limiting climate change. And they build momentum for bigger policy actions like pricing carbon.

So offsets may best be used as a tactic in addition to rather than in lieu of all the other measures available to deal with climate change. And when it comes to climate change, we need all the help we can get.

For more information, read our in-depth explainer on carbon offsets.

Do you burn more calories exercising in the cold? Here’s what the science says.
How Trump’s impeachment trial foreshadowed his handling of the coronavirus crisis
Almost all of the actresses who’ve played Cleopatra have been white. But was she?
The fight to end Roe v. Wade enters its endgame next week
The food to avoid if you care about climate change
Trump’s sister calls him a liar with “no principles” in secret recordings