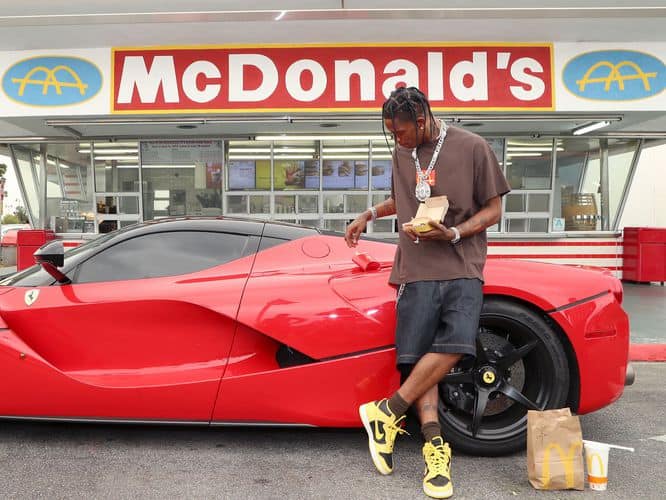 Shawn Mendes has a Chipotle bowl. Charli D’Amelio has a Dunkin’ coffee. But … why?

Last September, McDonald’s circulated a memo mandating its employees learn a raft of secret catchphrases and rituals. They were advised to be on the lookout for strangers who told them “Cactus Jack sent me,” or said “It’s lit” while mugging for TikTok, or drove up blasting Travis Scott without context. These would all be signs that a marketing campaign had worked, because a bacon quarter-pounder with lettuce was no longer just that: It was the Travis Scott meal.

Scott is far from the only celebrity to loan his name and likeness to a seemingly very normal food order. Over at Dunkin’, Charli has a coffee, and at Chipotle, Shawn gets a bowl. It’s one of the latest trends in fast-food marketing, where an existing menu item or order is named for someone you’ve heard of who also happens to eat the same thing. None of these campaigns involve new product launches. There’s no pretense that Travis Scott was deep in the test kitchen carefully dipping fries into different sauce cups, or that Charli D’Amelio stood behind the espresso machine layering in syrups until something clicked.

We’ve endured decades of celebrity endorsement deals on an unspoken agreement that endorsers are rarely organic users of the product. We understand that putting Bieber in a pair of Calvins is more a matter of casting than documentary. But Travis Scott really does order bacon on his quarter-pounder, and really does dip his fries in BBQ sauce, which we know because his deal sprang from an Instagram post where, the story goes, he was ordering just that. McDonald’s got in touch with him from there and made the order officially his.

A campaign so simple, it might seem, could have only come out of desperation. McDonald’s announced a 30 percent drop in sales in July, pinning much of the loss on Covid-19. People either couldn’t or didn’t want to go into stores, so restaurant sales of all kinds were plummeting. Dunkin’ sales also declined almost 20 percent in the second quarter of 2020, and the chain soon announced it would shutter more than 800 stores. Though Chipotle experienced slightly less of a drop, its rebound was heavily weighted toward users of its app, with over 60 percent of total sales going digital, suggesting a large engagement from the work-from-home crowd. Without working professionals sitting in or commuting to or from offices, it’s understandable that sales of everything enabling the office routine would take a hit.

Edward Cotton, a brand consultant who’s worked with companies like Chipotle, Jamba Juice, and Mini, believes Covid-19 not only necessitated the McDonald’s campaign but was likely a factor in the creative direction. “They’re looking for the biggest bang for the buck and the simplest solution,” Cotton says. “You’ve got the franchisees saying, ‘Look, we’ve just got no traffic. Business is dead.’ And you don’t want to make them make a guacamole quarter-pounder that they’ve never made before, because suddenly in the pandemic, you’ve got this training nightmare. … So maybe the simplest thing is to just do something with what you already have.” (McDonald’s, for its part, notes that the seeds for this sort of campaign were planted around last year’s Super Bowl.)

Landing somewhere between promotional menu item and endorsement deal, the celebrity fast-food order is somehow neither. It’s marketing’s mass conservation, with nothing created and nothing destroyed. It is both influencer marketing and lifestyle content, trying somehow for elevation and humility simultaneously: This cheeseburger is so exciting and chic that even Travis Scott eats it; Shawn Mendes is so normal and regular that he’ll even put these cauliflower shavings we’re calling rice into his pop star body. The logic asks not to be looked at too carefully, only ordered.

What’s also unique about these campaigns, aside from the fact that McDonald’s hasn’t had a celebrity on its menu since 1992, is that they exploit social media trends to market outside the walls of social media. There are entire corners of TikTok devoted to fast-food hacks, elaborate “secret” orders, trying and reviewing new menu items, or influencers simply sharing their regular orders.

This is part of what inspired Dunkin’s’ The Charli, a cold brew with whole milk and caramel syrup, which is the go-to order of Charli D’Amelio. D’Amelio had been ordering the drink, for free, unsponsored, and posting about it so much that her fans started shipping her and the company as “Chunkin.” At first, all she got for her free posting (aside from being in an imagined relationship with a beverage company) was some merchandise and a home cold brew tap. But eventually, Dunkin’ couldn’t ignore the value of her cosign, and the full deal came through — not just with sponsored ads on TikTok, but her very own slot on Dunkin’ menu boards all across the country. Dunkin’ could have kept soaking up D’Amelio’s free publicity, but if anything, the deal serves as inspiration for others to keep posting — someday, you too, could end up on the menu.

Travis Scott has been able to straddle the line between social media popularity and traditional fame better than virtually any celebrity of the moment, which doubtlessly contributed to the overall success of the McDonald’s campaign. Chipotle didn’t provide sales figures, while Dunkin’ claimed they sold hundreds of thousands of The Charli in its first five days, and noted that by the second day, they experienced a 45% increase in cold brew sales. Scott reportedly made $20 million off his deal, with a quarter of that as an upfront fee and the rest coming from merchandise sold in connection to the meal. Some McDonald’s locations even ran out of the meal’s ingredients at one point, causing the corporation to take direct control of ordering for some of its franchises. Owing mostly to this and Scott’s Fortnite concert from last year, Forbes put the rapper back on its recent 30 Under 30 list, and called him “corporate America’s brand whisperer,” which itself is corporate brand-speak for “very famous guy.”

Cotton notes that further iterations on the trend may fail to deliver the same success. “You’ve got this outrageous celebrity with no investment in R&D for the product, and the celebrity’s just so much value,” he says. “As you move further down the celebrity food chain, do you have to start putting something into your product to make the whole package interesting?”

Two of the more recent types of these campaigns came from Chipotle, first in December with Miley Cyrus’s app-exclusive burrito order, and later the Shawn Mendes bowl. Cyrus’s again sprung from TikTok, with a run of prankishness where her followers would do certain things if she commented on their posts (i.e., @mileycyrus, comment what I should get as a tattoo). The fun escalated, as everything fun does these days, to an advertisement. Chipotle commented that it would make Cyrus a signature item if she replied, which of course she did and it did.

The Shawn Mendes bowl is not pretending to have emerged as “organically” in the marketing sense, but more in the food sense, given its incorporation of Chipotle’s recently introduced cauliflower rice. Neither the order underlying Mendes’s bowl nor the rice is a limited-time item, only your ability to order the bowl under Mendes’s name and have $1 from every sale be donated to Wonder Grants, a program through Mendes’s foundation that awards cash support to young “changemakers” in fields from the arts to sustainability. (The promotion and the campaign ended on January 28.) Yet just as with Charli D’Amelio’s cold brew or Travis Scott’s meal, press surrounding the promotion has referred to the orders as limited-time, successfully passing on the brand’s likely desire that they be received as scarce and rare specialty items.

Cotton compares the move to the Supreme model. “There’s some weird crossover between those two worlds,” he says, “one of massive, say, expensive, almost luxury, and then the other’s everyday, but they share the scarcity aspect.”

But what happens when the deals end, when the illusion of scarcity vanishes and a bacon quarter-pounder is no longer the Cactus Jack meal, or an overly sweetened Dunkin’ cold brew is only that, stripped of the magic of being The Charli? The ads and posters and menu cards will be retired, but the food will remain in place. Maybe the chains will rename the same items after new celebrities and influencers, turning Shawn Mendes’s bowl into a sort of ceremonial designation occupied in two-year terms. New posters and ads can be concocted to sell the same product — even when there’s nothing new to buy.