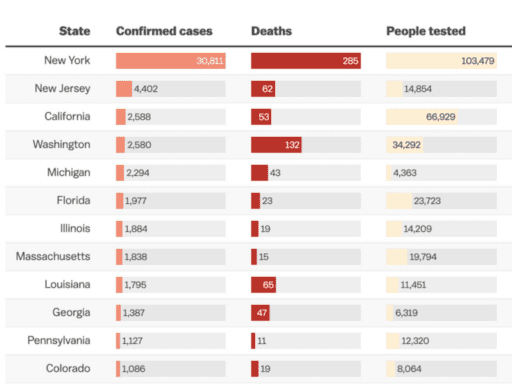 In cases, deaths, and tests per capita, here’s how each US state’s coronavirus situation compares.

The coronavirus outbreak first erupted in the United States in Seattle, and while New York has now become the American epicenter of a worldwide pandemic, there are Covid-19 cases in all 50 states.

The pathogen is spreading across the country; positive tests and death counts are rising everywhere. The future depends on each state’s ability to engineer an effective response, to slow the virus down and eventually contain it. What plans for physical distancing are put in the place — and how well are they followed? Can the state health system survive an influx of infected patients?

“Each region has its own socio-cultural reasons that contribute to the rate of spread and its own approach to dealing with that rate of spread,” says Carl Bergstrom, a professor of biology at the University of Washington who has been modeling infectious disease outbreaks for 20 years.

For now, the coronavirus appears concentrated in urban centers, primarily New York City and its surrounding suburbs as well as Seattle, Boston, and San Francisco. That’s where the virus first landed and it could flourish in those places because they are densely packed with people, who, for example, have been riding public transportation and therefore had more exposure to a stealthy virus that takes several days for its symptoms to show up.

At the same time, we may still be under-testing in other parts of the country as well. Michigan has nearly as many confirmed Covid-19 cases as California, even though it has tested a much smaller share of people. Florida and Massachusetts have about the same number of positive tests, but the latter has tested at a much more robust rate. High positive test rates suggest that the real number of cases is much larger than the official count.

Here’s how states, territories, and Washington, DC, compare based on number of confirmed cases, deaths, and number of people tested, according to data from the Covid Tracking Project. Using the latest available Census Bureau numbers, we also calculated the number of tests per million people in a population, to give a better sense of a state’s efforts in tracking the disease.

State health systems have different capacities to handle the surge of Covid-19 cases. Some started the crisis with higher uninsured rates, particularly in the South, because they have refused to expand Medicaid through the Affordable Care Act. Now millions of workers are newly unemployed as the coronavirus economic crisis sets in, suddenly uninsured during a public health emergency. Some states have younger and healthier populations; others are older. Certain states have more hospital beds per capita than their neighbors, and funding for public health differs considerably among states.

“One thing that always strikes me about the American system is effectively there are, like, 51 American systems.” Ellen Nolte, professor of health services and systems research at the London School of Hygiene and Tropical Medicine, told Vox last year.

The coronavirus pandemic will present an unprecedented challenge for states

New York, Washington, and California have already been forced to take drastic measures to curtail the Covid-19 outbreak, and other states like Ohio and Maryland have followed their lead. But some states have been reluctant to impose strict distancing guidelines, worried about the imposition on daily life and especially businesses.

New York Gov. Andrew Cuomo has moved to expand hospital capacity in his state from 53,000 to 62,000 beds; he also waived out-of-pocket costs for health insurance, and the state put out a call for retired doctors to volunteer their services to avert a hospital staffing shortfall. New York set up “containment zones” to contain local hot spots, where all the area schools were closed, and religious gatherings and other large gatherings were halted.

But the state initially hesitated to put out a “stay at home” guidance, with conflicting messages coming from Cuomo and NYC Mayor Bill de Blasio. The state instituted that policy on March 22, but New York is still likely to be the central location for the US outbreak for the foreseeable future, given the spread there and the sheer scale of cases and deaths.

Washington Gov. Jay Inslee quickly ordered the state’s schools to close until the last week of April after the Everett nursing home outbreak. He also appeared uneasy about issuing a statewide “stay at home” order, however, though he’s since done so. California Gov. Gavin Newsom was the first governor to issue such an order (after several major metropolitan areas in his state had done so), and he helped convince some of the big tech companies in his state to donate much-needed protective masks for medical staff.

Other governors have adopted more lax attitudes toward the crisis, at least initially. Oklahoma Gov. Kevin Stitt tweeted out (and then deleted) a picture of him and his family eating at a restaurant even though other states were starting to shut down nonessential businesses. Florida Gov. Ron DeSantis has shrugged off calls to issue a stay-at-home order after pictures of college-age beachgoers in his state stirred up fears they would become vectors for spreading a virus that is generally more mild for young people.

Hospitals will rely on states to increase the health system’s capacity of hospital beds, ICUs and ventilators, as well as the personnel to staff them. States in turn will need support from the federal government, as their tax revenue takes a hit in the economic downturn. The new stimulus bill passed by the Senate provides some money directly to hospitals as well as funding for states.

The relationship between the states and the White House has been a fickle one in the crisis. President Donald Trump has insinuated states should treat his administration kindly in order to win more federal support. Governors have contradicted Trump over his speculation that the country could effectively return to normal life as soon as Easter.

States are depending on federal aid to increase testing capacity, too, so they can actually trace the outbreak. New York so far is testing people at the highest rate of any state, while there are other states with a growing number of cases (like Texas, Georgia, and Michigan) where testing rates still remain quite low.