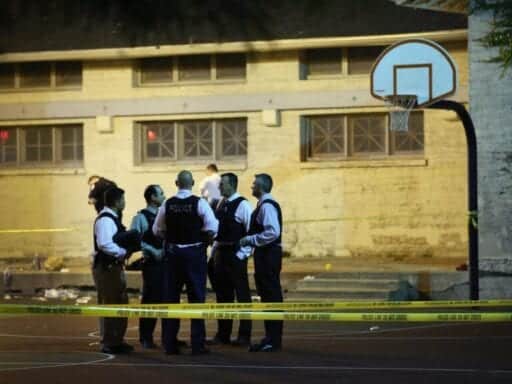 Protesters plan to block a busy road to draw attention to the high rates of violence in parts of the city.

Chicago protesters opposed to the city’s current administration and police leadership plan to block off the busy Lake Shore Drive on Thursday. But the demonstrations are not focused on decrying just police shootings — they are, broadly, an anti-violence march.

The city has been mired by national attention toward its high murder rates in recent years. And while Chicago has seen some declines in 2018, the daily and weekly barrage of news stories about street violence — along with the city hitting more than 300 homicides so far this year — has taken its toll. So protesters are calling on Mayor Rahm Emanuel and Police Superintendent Eddie Johnson to resign.

The protesters will hit Lake Shore Drive, affecting the city’s North Side, which in general sees lower murder rates and better socioeconomic conditions. As the protesters told the Chicago Tribune, the plan is to “redistribute the pain” — by forcing North Siders to deal with this kind of inconvenience, they can get a small taste of the horrors that the South Side faces from the more regular, vicious disruption of gun violence and what many feel is a lack of investment from the city and state into the predominantly black South Side.

The 4 pm demonstrations may also disrupt a nearby Chicago Cubs game, set to begin at 7:05 pm. Some protesters have even suggested that demonstrators may try to go into the ballpark. Through this kind of disruption, protesters hope to draw more attention to their cause, though virtually everyone agrees it’s highly unlikely Emanuel will resign in any case.

This is the second large-scale anti-violence demonstration in Chicago in the past couple of months to leverage this kind of tactic. The previous one, on July 7, shut down the Dan Ryan Expressway in an effort to get city officials to pay more attention to crime, joblessness, and poverty.

The demonstrations are not explicitly about police violence, but it does play a role: The protesters have said that they feel there’s a lack of transparency when police shoot and kill civilians.

These protests, however, show that these issues go hand in hand. It’s not just that police disproportionately kill black people, though statistics show that is the case. It’s that when police are needed to protect black communities, officers are often absent — contributing to a sense of lawlessness and higher rates of violence and murder in cities like Chicago.

Consider one statistic, from the Washington Post: “In Chicago, fewer than 30 percent of homicides resulted in an arrest, compared with over 70 percent in Richmond, Va.”

What’s more, this clearance rate is even lower for black communities. And this is true nationally, with just 47 percent of murders involving black victims resulting in an arrest, compared to 63 percent of those involving white victims over the past decade across 52 US cities studied by the Post.

As a result, the Post found that in Chicago and particularly its predominantly black neighborhoods, “vast areas stretching for miles experience hundreds of homicides with virtually no arrests.”

As journalist Jill Leovy explained in her award-winning book Ghettoside, the racial disparity reflects a lack of resources going to solving murders, particularly in minority communities. Community distrust can also play a role, since it makes it harder for police to get cooperating witnesses needed to solve murders. In this way, community distrust and poor murder solve rates feed into each other — people are less likely to cooperate with police when they feel unprotected by the law, and police are less able to protect people without cooperation. All of this together leads to fewer arrests when black people are the victims.

The result is less trust in the police. This is on top of the distrust fostered by what many minority communities see as a mix of abuse and harassment — the police shootings in which black people are disproportionately the victims, the police stops over petty crimes and drugs, the US Department of Justice report showing that Chicago police officers often see and treat people in minority communities as “as animals or subhuman,” and so on.

Leovy explained the national context: “Like the schoolyard bully, our criminal justice system harasses people on small pretexts but is exposed as a coward before murder. It hauls masses of black men through its machinery but fails to protect them from bodily injury and death. It is at once oppressive and inadequate.”

There are more factors contributing to crime, including socioeconomic conditions and racial segregation. But the quality of policing plays a key role too.

This is a reflection of a concept known as “legal cynicism”: When people don’t trust the law, they’re less likely to call on law enforcement to protect them. And they may, as a result, be more likely to take the law into their own hands — and that can lead to violence. If someone thinks his family is under imminent threat but doesn’t trust the police to protect them, then maybe he’ll take preemptive, perhaps deadly action on his own.

There’s research to back this up. A 2016 study, from sociologists Matthew Desmond of Harvard, Andrew Papachristos of Yale, and David Kirk of Oxford, looked at 911 calls in Milwaukee after incidents of police brutality hit the news.

They found that after the 2004 police beating of Frank Jude, 17 percent fewer 911 calls were made in the following year compared with the number of calls that would have been made had the Jude beating never happened. More than half of the effect came from fewer calls in black neighborhoods. And the effect persisted for more than a year, even after the officers involved in the beating were punished. Researchers found similar impacts on local 911 calls after other high-profile incidents of police violence.

But crime still happened in these neighborhoods. As 911 calls dropped, researchers also found a rise in homicides. They noted that “the spring and summer that followed Jude’s story were the deadliest in the seven years observed in our study.”

That suggests that people were simply dealing with crime themselves. And although the researchers couldn’t definitively prove it, that might mean civilians took to their own — sometimes violent — means to protect themselves when they couldn’t trust police to stop crime and violence.

“An important implication of this finding is that publicized cases of police violence not only threaten the legitimacy and reputation of law enforcement,” the researchers wrote, but “they also — by driving down 911 calls — thwart the suppression of law breaking, obstruct the application of justice, and ultimately make cities as a whole, and the black community in particular, less safe.”

As Leovy put it in Ghettoside, “Take a bunch of teenage boys from the whitest, safest suburb in America and plunk them down in a place where their friends are murdered and they are constantly attacked and threatened. Signal that no one cares, and fail to solve murders. Limit their options for escape. Then see what happens.”

On Thursday, Chicago demonstrators are trying to put a stop to this vicious cycle — by calling attention to the city’s high rates of violence with a protest that will disrupt a lot of people’s routines.

Gaetz’s effort to make the impeachment hearing about Hunter Biden’s problems backfired spectacularly
CNN’s debate fact-check laid out a “bombardment of dishonesty” from Trump
The Trump presidency is over, and Obamacare is still alive
The EU and the UK still haven’t reached a post-Brexit agreement. What’s next?
How to tell stories about evangelical Christians that neither mock nor glorify them
Trump is the obstacle to a shutdown deal