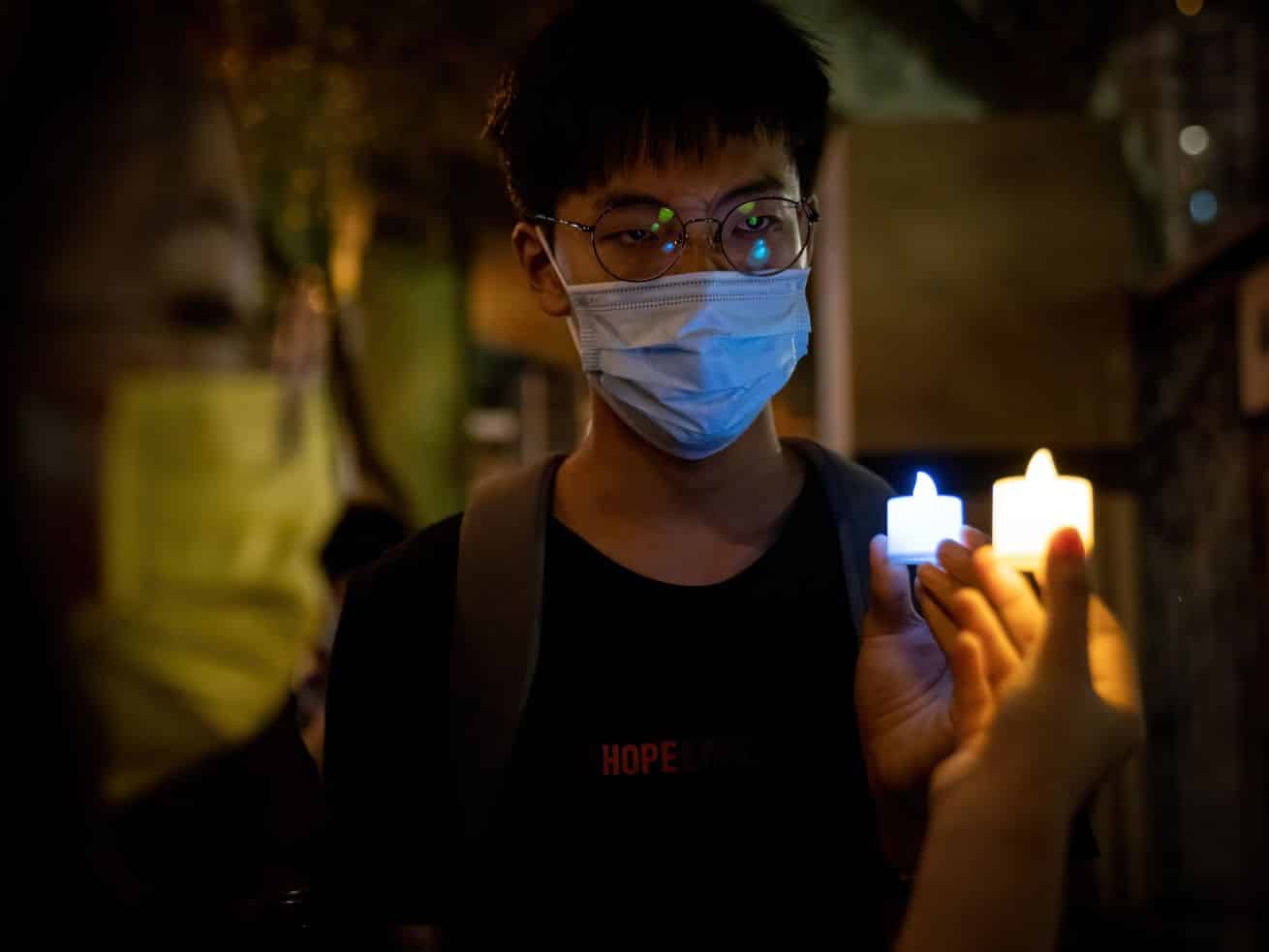 Turnout for the vigil was down, though some protesters defied orders.

In the face of a new national security law and the arrests of political activists, people in Hong Kong still took to the streets on June 4 to commemorate the 32nd anniversary of the massacre at Tiananmen Square in Beijing, China.

Victoria Park, in northern Hong Kong, usually draws thousands of people waving candles to memorialize the still-unknown number of people who died during the Chinese government’s crackdown on pro-democracy protesters in Tiananmen Square in 1989. But this year, Hongkongers who dared to show up in person were met with signs from police warning of their possible prosecution, and Victoria Park was barricaded shut.

Officially, 2021’s Tiananmen Square remembrance was canceled by the local government because of the coronavirus pandemic, as it was last year. But activists told the BBC that they see this year’s intervention as a step to silence dissent on the island, one of the few places in China where the 1989 Tiananmen Square activists have been allowed to be commemorated.

Last year, when police closed Victoria Park to the Tiananmen Square commemoration, demonstrators knocked down the barricades and continued their candlelight vigil. It was the first time the Hong Kong government had tried to stop the demonstration in 30 years. But since then, the Chinese government passed a new security law, which makes it easier to punish protesters and gives the mainland more control over Hong Kong.

A new law, to which Hong Kong officials weren’t privy

The morning of June 4, the vice chair for the pro-democracy group Hong Kong Alliance, Chow Hang Tung, was arrested for posting about the remembrance online. Among other posts promoting the memory of Tiananmen Square, Chow called for people to “turn on lights everywhere, mobile phone lights, candles, electronic candles…” on her Facebook page the day before her arrest. Chow, who is also a lawyer, predicted that she would be arrested in an interview before June 4. She was arrested for promoting an unauthorized assembly and was released from custody on Saturday.

When the Chinese government passed the national security law for Hong Kong in June of 2020, the full text of the legislation was kept secret — even from Chief Executive Carrie Lam, the top public official in Hong Kong. The law’s 66 articles criminalize acts that fall into four categories: secession, subversion, terrorism, and collusion. Critics of the bill, including Human Rights Watch and Amnesty International, have called the text a threat to free speech and overly broad.

As Vox’s Jen Kirby wrote in 2020 after the passage of the law:

Under each of these activities are some specific offenses. For example, damaging government buildings could qualify as “subversion,” a serious offense that could result in life imprisonment. On July 1, 2019, Hongkongers stormed and defaced the Hong Kong Legislative Council to protest the extradition bill, making this provision look very much like a response to previous protest tactics.

Another example: Under the “colluding with foreign forces” provision, the law says Hongkongers could be arrested and prosecuted if they lobby or work with foreign entities against the Chinese government, including “enacting laws and policies that cause serious obstruction or serious consequences to Hong Kong or China,” according to the Hong Kong Free Press.

This could implicate human rights groups, or even individuals who have called for sanctions or increased pressure on China to stop its intervention in Hong Kong. The Chinese government has blamed outsiders, specifically those in the West, for fomenting opposition against its rule in Hong Kong, and this looks to be a way to silence its critics.

Of course, these expansive definitions are kind of the point.

Activists in Hong Kong have asked foreign governments to intervene in disputes with China, including during the recent extradition bill protests, where it was not uncommon to see American and British flags among protesters. This direct lobbying done by activists like Joshua Wong, a recently imprisoned former secretary-general of the pro-democracy party Demosisto, could now be considered illegal collusion.

The law also extends Chinese authorities’ presence in Hong Kong. Beijing now has its own security office on the island, the mainland capital will have the authority to interpret the law, and people suspected of breaking the law can be wiretapped or surveilled by these security forces (including non-permanent residents).

“Effectively, they are imposing the People’s Republic of China’s criminal system onto the Hong Kong common law system, leaving them with complete discretion to decide who should fall into which system,” Johannes Chan, a legal scholar at the University of Hong Kong, told the BBC.

More than 100 organizers have been arrested in the last year

Even before June 4, activists in Hong Kong were suffering the effects of the national security law. Chow became the face of the Hong Kong Alliance, in part, because so many of her fellow organizers have been arrested. More than 100 arrests have been made under the national security law since last June. Naturally, an increase in the number of people arrested for protesting, political dissent, or other anti-government efforts could be seen as a deterrent to others who may want to demonstrate.

Of those arrested, as of March of this year, 56 have been charged. This includes those arrested in a 1,000-officer raid in January that apprehended more than 50 pro-democracy activists for their involvement in an unofficial primary election, which government officials said was an attempt to “overthrow the government.” Forty-seven people were eventually charged with “conspiracy to commit subversion.”

They join pro-democracy activist Wong, who was previously sentenced to 13 months in prison, along with dozens of other pro-democracy protesters and organizers on the list of those victimized by Beijing’s law.

The national security law also allows the government to retroactively charge people. Media mogul Jimmy Lai was arrested and sentenced in April under the new security law for his participation in pro-democracy protests in 2019. Lai, 72, was one of the few charged and sentenced for his role in the protests who was not also an elected legislator.

In contrast to mainland China, where censorship and freedom of expression controls are strictly maintained, Hong Kong’s freedom of speech, press, and publication were written into its governing constitution and bill of rights when the “one country, two systems” policy was established. Hong Kong’s multi-party political system also inherently adds to the possibilities for political expression in comparison to the mainland’s one-party rule.

Hong Kong’s capacity and tolerance for dissent and freedom of speech were also cited as reasons why NSA whistleblower Edward Snowden chose the territory to share his trove of documents with journalists in 2013. “[The people of Hong Kong] have a spirited commitment to free speech and the right of political dissent,” Snowden told journalists.

However, the erosion of Hong Kong’s semi-autonomous governance has sparked questions about the future of free speech there, and how people will keep alive the memory of the movement at Tiananmen Square.

In mainland China, Tiananmen Square and other words and phrases related to the pro-democracy movement, as well as articles and Wikipedia pages associated with the events of 1989, have been censored.

This year, Microsoft came under fire when its Bing search engine failed to return results for the popular image search “Tank Man,” which is the nickname of the iconic photo by Stuart Franklin of one protester blocking the path of three tanks in the middle of Tiananmen Square. Tank Man has long been a symbol of resilience for the pro-democracy movement. In the US, UK, and Singapore, the image vanished from Bing; Microsoft blamed “human error.”

Part of the significance of the Tiananmen Square commemoration in Victoria Park each year is its defiance against censorship and control by the mainland. “Hongkongers are still on our side and want to fight for democracy,” Chow said to the BBC. “Hong Kong allows political expression,” she added. “Are we letting them [the Chinese government] use their ‘red lines’ to change our basic principle?”

In neighboring Taiwan, the Tiananmen Square anniversary is also used as an opportunity to show defiance against China. Taiwanese president Tsai Ing-wen posted on Facebook, “We will also not forget about the young people who sacrificed themselves on Tiananmen Square on this day 32 years ago, and that year after year, friends in Hong Kong who always mourn June 4 with candlelight.” In previous years, people have also commemorated the anniversary with demonstrations in Taiwan in solidarity with the people of Hong Kong.

Critics of China’s national security law in Hong Kong and of the arrests in the last year fear that censorship norms from mainland China will transform the culture and freedoms on the island. However, activists have shown themselves to be unrelenting and undaunted by the new authorities, and pro-democracy organizers, in Hong Kong and in exile, continue to post online and share their dissenting views.

“Many ask if the vigil will disappear. But I think we have been persisting for more than 30 years,” Chow said. “It is more or less in Hong Kong people’s DNA now.”

Martin Scorsese has spent his entire career searching for God
Fiona Hill’s testimony gives her account of a disturbing White House meeting on Ukraine
What to expect at Trump’s Senate impeachment trial
Mission: Impossible — Fallout is the most entertaining blockbuster of the summer
Low-income immigrants are afraid to seek health care amid the Covid-19 pandemic
Twitter is finally verifying people again