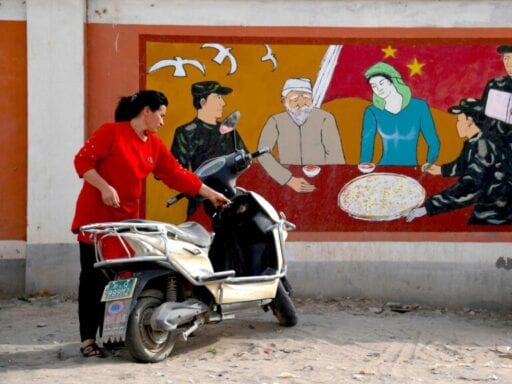 One of the social media giants says it will no longer accept ad money from state-controlled media.

In China’s internment camps, Muslims are reportedly subjected to forced indoctrination, torture, and even death. Yet some paid ads on Facebook and Twitter would have you believe they’re wonderful places.

The US-based social media giants have been enabling Chinese state-owned media to spread misinformation about the camps, investigations by the Intercept and BuzzFeed News revealed this week.

The paid ads aim to convince Westerners that the camps in China’s northwestern Xinjiang region are not sites of human rights abuses, contrary to the findings of several governments, China experts, and international bodies like the UN. An estimated 1 million Uighurs, the country’s predominantly Muslim minority, have been detained in the camps since 2017.

On Twitter, the Global Times promoted a tweet featuring a video of its editor-in-chief, who criticized politicians and journalists who’ve condemned the camps, saying, “Their hands are in a way soiled with the blood of the Chinese people who died in violent attacks” perpetrated by Uighurs. (In 2009, ethnic riots resulted in hundreds of deaths, and some radical Uighurs have carried out terrorist attacks in recent years.)

He added, “A vast number of developing countries, including Muslim countries, understand and support governance in Xinjiang. It used to be a place suffering from terrorist violence. The region has regained peace and development.”

Another promoted video purports to show Uighurs happily milling about and dancing in the streets of Xinjiang, while upbeat music plays in the background.

When a media outlet like the Global Times pays Facebook and Twitter — both of which are blocked in China — to promote videos like these, millions of viewers may be exposed to them whether they follow the outlet or not. These videos, some of which have been circulating as early as June, were targeted at users in the US and other Western countries.

China has also been using Facebook and Twitter to spread disinformation about the huge protests underway in Hong Kong. Outside observers alerted the social media platforms to the problem.

How the social media companies are (and aren’t) responding

On Monday, Twitter took a stand by updating its advertising policies: It will no longer take advertising money from state-controlled news media outlets.

Facebook’s response was much more anemic. The company told BuzzFeed News it will keep accepting such ads but will take a “close look at ads that have been raised to us to determine if they violate our policies.”

That’s the same line Facebook has been using for years now. Consider what happened in Myanmar in 2017. Social media users took to the platform to incite violence against the Rohingya, a mostly Muslim minority group in the Buddhist-majority country. Hundreds of thousands were displaced, thousands were killed, and hundreds of villages were burned to the ground. It was, the United Nations said, “a textbook example of ethnic cleansing.”

After facing months of criticism for its role in the crisis, Facebook acknowledged that it had been too slow to respond to inflammatory posts. It removed several users with links to the military, including its commander-in-chief, and banned four insurgent groups it had classified as “dangerous organizations.” It vowed to do better.

But just a couple months ago, Facebook executives were still dragging their feet about combatting misinformation more broadly. The company says it wants to remain “neutral” on deepfakes — AI-manipulated videos that make it look like someone said or did something they never actually said or did — even though experts warn this technology could endanger the 2020 elections.

Facebook seems to be continuing this approach now with China. Instead of simply refusing paid ads from state-controlled media, it wants to keep relying on outside experts to flag potentially problematic posts, which it may or may not then remove, at a pace that may or may not be quick enough to avert harm.

For the Uighurs and the Hong Kong protesters, and for the Rohingya before them, this sort of lax policy is the stuff of nightmares, because it can help turn their country into a tinderbox. For an authoritarian government like China, it’s a dream.

How the US created a disaster in Afghanistan