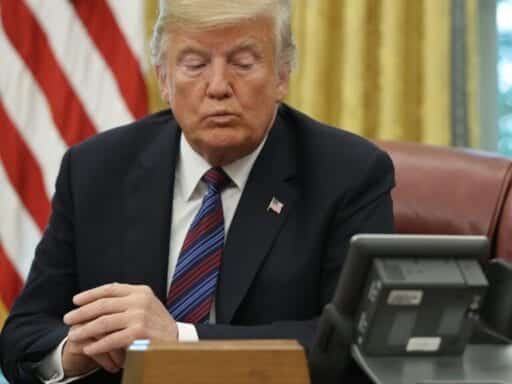 Trump continues to use unsecured cellphones, according to the New York Times.

US intelligence and White House officials are increasingly concerned about President Donald Trump’s use of his official and personal iPhones to communicate with friends because of the risk that Chinese and Russian spies could be listening to Trump’s conversations.

That’s according to a new report by the New York Times’s Matthew Rosenberg and Maggie Haberman.

White House aides have repeatedly warned the president that because his iPhones are not fully secure, they could be susceptible to tapping by Chinese and Russian intelligence. Yet Trump persists in using the phones instead of a more secure landline at the White House.

Current and former officials who spoke with the Times said that America’s intelligence agencies have determined that spies from both China and Russia have listened in on the president’s cellphone calls. Chinese spies in particular are monitoring Trump’s calls, the Times reports, to glean information and insights about the president’s thinking on important trade decisions and attempt to avoid further trade conflict with the United States.

Trump has been escalating trade tensions with China: He’s levied $200 billion worth of tariffs on the country and promised more. China has responded with tariffs of its own.

According to the New York Times report:

In what amounts to a marriage of lobbying and espionage, the Chinese have pieced together a list of the people with whom Mr. Trump regularly speaks in hopes of using them to influence the president, the officials said.

Among those on the list are Stephen A. Schwarzman, the Blackstone Group chief executive who has endowed a master’s program at Tsinghua University in Beijing, and Steve Wynn, the former Las Vegas casino magnate who used to own a lucrative property in Macau.

The Chinese have identified friends of both men and others among the president’s regulars, and are now relying on Chinese businessmen and others with ties to Beijing to feed arguments to the friends of the Trump friends.

While Russia is also listening in, it’s not trying as hard as China is to get into Trump’s good graces because of the already close relationship between Trump and Russian President Vladimir Putin.

Two out of Trump’s three iPhones are official phones and have been modified by the National Security Agency to limit their functions and thus make them less susceptible to hacking or interference. But the president’s calls on the phones can still be intercepted by foreign governments, according to officials the Times spoke to.

Previous presidents, including Barack Obama, did not use cellphones to make calls during their time in office for this reason — using secure phones in the White House instead. The iPhone Obama used in his second term could not make calls, didn’t have a camera or microphone, and had very limited capabilities, the report says.

Officials told the Times that they’re not concerned about Trump disclosing classified information during his cellphone calls, though — because he doesn’t pay attention to details.

Officials “said they had further confidence he was not spilling secrets because he rarely digs into the details of the intelligence he is shown and is not well versed in the operational specifics of military or covert activities,” Haberman and Rosenberg write.