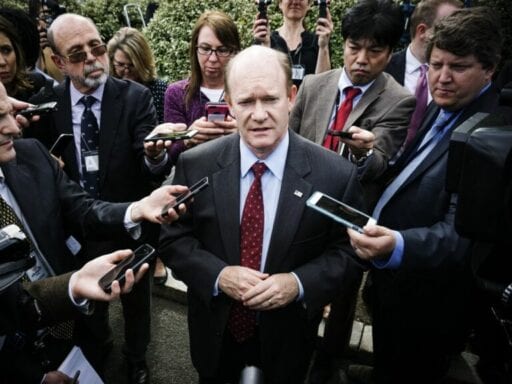 But at the height of Supreme Court nominee Brett Kavanaugh’s bitterly contested Senate confirmation fight, Coons has become one of the Senate’s most important players.

It was Coons who played a central role in convincing Sen. Jeff Flake (R-AZ) — a crucial Republican swing vote in Kavanaugh’s confirmation — to pressure Republican leadership into allowing a week-long FBI investigation on multiple credible accounts of sexual misconduct by the judge.

Coons opposes Kavanaugh’s confirmation for the reasons many Democrats do — and particularly now that Kavanaugh has been accused of sexual assault by Christine Blasey Ford, a Palo Alto University professor who grew up in the same area as the judge. (It’s an allegation Kavanaugh denies.)

Coons has repeatedly said he thinks the Senate didn’t learn its lesson from Anita Hill. “I believe that 27 years after the hearings into professor Anita Hill’s allegations, we must show that at the highest levels of power women are respected when they bring forward allegations of sexual assault.”

Now, hours before Senate Majority Leader Mitch McConnell has vowed to proceed with Kavanaugh’s nomination on the Senate floor, Kavanaugh can only afford to lose one Republican senator’s support, and Flake remains undecided. The last time Flake felt that way — last Friday — he turned to Coons for advice. The two were expected to meet on Thursday to discuss the report.

Coons, who has worked to build credibility across the aisle, didn’t have a plan or “secret scheme” for that meeting, he said. Instead, he said he’d try the human approach. “I’m just hoping to say, how’s it going? How is your day?”

The stakes could not be higher. A Supreme Court seat — and a generation of doubts about the court’s legitimacy — is hanging in the balance. Kavanaugh represents the partisan blindness in Washington at its peak. If Coons can convince Flake, a conservative Arizonan, to stick with him, it will be by drawing inspiration from the last person to throw a wrench into the Senate’s plans, a Republican lawmaker also known for his close relationships with senators across the aisle: the late Arizona Sen. John McCain.

As the Senate barreled toward a final vote on Kavanaugh, Coons found himself nostalgic for the era when McCain, who passed away in August after a year-long battle with brain cancer, could work with former Vice President Joe Biden.

On Thursday afternoon, Coons began telling a group of reporters, almost unprompted, about watching Biden’s moving speech for McCain last year. “I went home and said to my wife, ‘Wow, what an amazing speech, wasn’t this great?’ His wife looked at him and indicated it was his turn to fill Biden’s shoes. “That’s your job now,” she told him.

When he wondered how, she said, “Well, who is your John McCain? It took Joe decades [to build that relationship]. Who are you traveling the world with?” The first person he thought of was Flake. Coons and Flake, like former Delaware Sen. Biden and McCain, have developed both a personal and working relationship in Washington.

Their friendship seems to be based as much on official foreign trips — a unique kind of camaraderie that only US senators enjoy — as on any particular legislative common ground. (The pair did get a bill to stop wildlife trafficking, a result of their travels together, passed and they have teamed up on a Russia investigation-related resolution.)

But it’s not just Flake. Coons has also worked with Sen. Bob Corker (R-TN). This week their bill — a $60 billion foreign economic development proposal — passed the Senate floor and is on its way to Trump’s desk, in what Coons said was his biggest legislative accomplishment of this cycle.

Both Flake and Corker are Republicans, but they’re vocal Trump critics. Both are not running for reelection this year, and both have been demoralized by the Trump era.

Chris Coons, one of the last defenders of respectability politics in the Senate

Coons’s colleagues couldn’t be more fond of him. Sen. Catherine Cortez Masto (D-NV) said she considered Coons a mentor. She thought Coons wanted to carry on the tradition of McCain — one of the Senate’s elder statesmen, somebody who takes young senators under their wing.

“He feels that he’s gonna do the same thing,” Cortez Masto told Vox, “whether you’re an R or a D.”

She traveled with Coons — and Jeff Flake — on her first overseas congressional trip earlier this year. Coons made a point to sit down at the end of every day with Cortez Masto and Sen. Maggie Hassan (D-NH), another freshman senator, to chew over what had happened that day.

“That was something he took on. It just shows you he cares,” Cortez Masto said.

The Delaware senator, who has a master’s degree in ethics from Yale Divinity School, also chairs a weekly prayer breakfast with Sen. James Lankford (R-OK). It’s that kind of thing that has earned Coons such widespread respect even in such divisive times.

“He’s a prince,” Sen. Angus King (I-ME), who caucuses with the Democrats, told Vox. “He’s one of my favorite people.”

King recalled that, when he was first elected to the Senate in 2012, Coons was the first senator to call him. He offered his congratulations and made himself available for any advice that King might need when he came to the Capitol. “I don’t even know how he got my number.”

The quintessential Coons moment came this April. Republican Sen. Johnny Isakson of Georgia couldn’t make it to a critical committee vote on Secretary of State Mike Pompeo’s nomination because of a friend’s funeral. It looked like the committee would need to stay in session until almost midnight to wait for Isakson’s return — and Isakson has been struggling with Parkinson’s disease, which he first made public in 2015.

So Coons, though he opposed Pompeo, voted “present” on his nomination instead of “no” in the Foreign Relations Committee. That allowed Pompeo’s nomination to move ahead to the Senate floor, without forcing Isakson to rush back to Washington simply to arrive at a foregone conclusion. Corker, the committee chair, was nearly moved to tears by Coons’s gesture.

“That’s the kind of guy he is,” King said. “Chris is one of the most serious, conscientious, principled people I think I’ve ever known. I wouldn’t say that lightly.”

Chris Coons almost never made it to the Senate

Coons has found himself a central player in a drama that could reverberate through Washington and the rest of the nation for decades — but it was originally a shock that he got to the Senate at all.

In 2010, when Coons was 47, he had never been elected to an office higher than county executive and yet he decided to run for Senate. He had spent his life volunteering in South Africa and Kenya, working on homeless issues in Washington, DC, then practicing as a private attorney in Delaware.

He ran to replace Sen. Ted Kaufman, a Democrat who had served for two years after Joe Biden left his Senate seat to become vice president. He was considered a huge underdog against his likely Republican opponent, Mike Castle, who had been in Delaware politics for decades, serving as governor and in the House.

Castle was a moderate Republican, in a relatively centrist and business-friendly state, set to face a comparative unknown in Coons. The polling showed Castle leading Coons by nearly 30 points during the early months of 2010 and maintaining a double-digit lead for most of the year.

But this was 2010, and Castle lost the GOP primary to Christine O’Donnell, who had leaned hard into the Tea Party wave overtaking the Republican Party that year. But while her abrasive conservatism won O’Donnell the GOP primary, it proved to be a loser with the broader Delaware electorate. Coons wound up beating O’Donnell by nearly 17 points in the general election.

It’s impossible to prove, but some wonder if Coons’s quasi-accidental senator status has contributed to his dedication to bipartisanship — and his seizing of the moment amid the Kavanaugh drama. One theory on Coons, told privately by Democrats, is that he has struggled to make a name for himself and now sees an opportunity in his friendship with the wayward Flake.

There is also a more generous interpretation of Coons: a man sincerely trying to find a middle ground with his friend at the nation’s greatest hour of need. But a man who is also painfully naive about the realities of today’s polarized Washington.

Republicans, for their part, begrudgingly give Coons respect for the way he has courted Flake during the Kavanaugh crisis. As one Senate GOP aide put it: “Coons expertly seduced Flake.”

Democrats and Republicans have been talking past each other on Kavanaugh since his nomination was first put forward.

After being briefed on the FBI’s report investigating the allegations of sexual misconduct against Kavanaugh, Republicans declared they’d learned “nothing new” and it was time to carry through with confirming their Supreme Court nominee.

Coons has sat somewhere in the middle, seemingly the most generous with what has come of the final report. He said it fell short of his expectations, but added that he was happy there was at least some kind of inquiry.

“Senators are now in a better position to reach conclusions then they were a week ago,” Coons said. “There will be folks disappointed who say this does not clearly and completely exonerate Judge Kavanaugh, there will be folks disappointed that say this does not clearly corroborate Dr. Ford. That’s in the nature of both an investigation and a compromise.”

Whether Kavanaugh is confirmed to the Supreme Court or not, one thing is for certain: His friend and colleague Flake will be gone come January. That is beginning to weigh on Coons, that he may soon be left without any partners across the aisle.

“I’m genuinely struggling with the idea of a Congress without Jeff Flake, without Bob Corker, without John McCain,” Coons told reporters. “I am actively looking with senators with whom I can work with in the future because if I don’t have hope, I don’t know how I can come back here.”

Vox Sentences: Turkey to US: “No power can stop us”
Trump: Russia didn’t interfere in the election. GOP-led Senate panel: Yeah, it did.
A Nobel Prize-winning physicist sold his medal for $765,000 to pay medical bills
Ruth Bader Ginsburg, feminist icon, dies at 87
What we know about Congress’s potential $1 trillion coronavirus stimulus package
Aquaman first trailer: Jason Momoa is Earth’s only fish-whispering hope